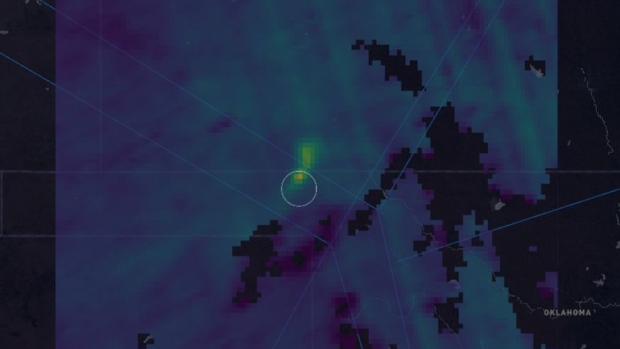 (Bloomberg) -- A pipeline operator owned by Warren Buffett’s Berkshire Hathaway Energy spewed a powerful plume of greenhouse gas in Oklahoma last week in one of the worst emission releases seen in the U.S. this year.

Northern Natural Gas estimates it released about 21.8 million cubic feet of natural gas over approximately three hours while fixing a leak in its pipeline that stretches across the U.S.

“In performing Northern Natural Gas’ integrity management program to ensure safe and reliable pipeline operations, a very small leak was discovered on a pipeline and was repaired Oct. 22,” company representative Mike Loeffler said in an email after Bloomberg inquired about it. “To enable the minor repair, a small amount of natural gas was released from a section of Northern Natural Gas’ pipeline facilities near the Kansas-Oklahoma border.”

Methane, which is the primary component of natural gas, has more than 80 times the warming impact of carbon dioxide over the short term and halting intentional releases and accidental leaks of the gas could do more to slow climate change than almost any other single measure. About 75% of methane emissions from the fossil fuel industry can be cut by 2030, according to the International Energy Agency.

The release had the second-fastest flow rate of any plumes spotted in the U.S. this year, according to a Kayrros SAS analysis of European Space Agency satellite data. The geoanalytics firm estimated an emissions rate of 116 tons of methane an hour was needed to generate the plume.

Scientists are just beginning to pinpoint the biggest sources of methane and existing satellite data isn’t yet globally comprehensive. Satellites can have difficulty tracking releases in high latitude and offshore and not all large plumes are detected because of limited frequency of coverage.

The state agency that regulates the oil and gas industry, the Oklahoma Corporation Commission, referred questions about the Oct. 22 plume to the Department of Transportation’s Pipeline and Hazardous Materials Safety Administration, which didn’t respond to emails seeking comment.

“The methane release was an emergency blowdown on a transmission pipeline so they could safely make a repair to the pipe,” Erin Hatfield, a representative for the state’s Department of Environmental Quality, said in an email.

The Biden Administration is expected to propose the most aggressive federal methane mandates yet for oil and gas wells this week. Methane will also be a focus at the United Nations Climate Change Conference next week in Glasgow.

Certain countries have shown it is possible to avoid large emission leaks from happening, Christophe McGlade, head of the energy supply unit at the International Energy Agency, said this week, speaking generally about methane. Large producers, including many in the Middle East, have shown it’s not necessary to have big leaks occurring while still producing high levels of oil and gas, he said.

“If the oil and gas industry is going to claim that it needs to leak or vent methane, then it’s very difficult to see how it can also make the case that natural gas is going to be part of the solution towards achieving our shared climate objectives,” he said.