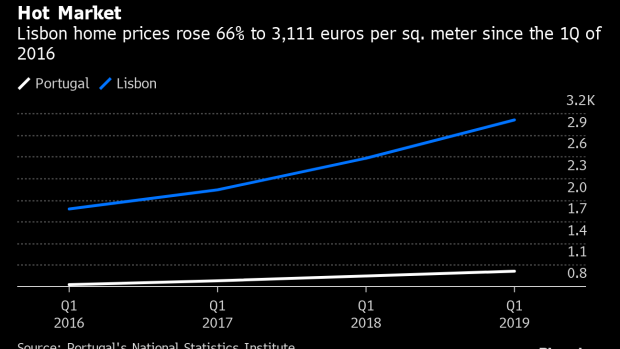 Residential buildings stand on the skyline in the Amadora district of Lisbon. Photographer: Angel Garcia/Bloomberg , Bloomberg

(Bloomberg) -- The time to buy, Baron Rothschild said after the battle of Waterloo, is “when there’s blood in the streets, even if the blood is your own.” Portugal’s pavements may not have literally run red from 2011 to 2014, but investors were fleeing as the country struggled to turn itself around under an international bailout. Except Claude Kandiyoti. He was looking for Lisbon real estate to buy.

In 2014, Kandiyoti’s Brussels-based family holding company, Krest Real Estate Investments, bought nine buildings in the center of the capital Lisbon for 46.5 million euros (51.2 million). Today, the 33,646 square-meter (362,163 square-foot) building portfolio is worth at least three times that much, he said.

“We’re not big developers; we’re just a family that understood the country,” Kandiyoti, whose family is also investing in hotels, retail parks, warehouses and new residential projects in Portugal, said in an interview. He said Krest is not looking to buy residential real estate in the city center as prices are too high.

Lisbon’s property boom has driven home prices in the capital up by 66% since the first quarter of 2016, outpacing wage growth and prompting calls for the government to do more to provide affordable housing for locals. Now even investors like Kandiyoti, who stand to make big returns from their bets in Lisbon, are starting to sound the alarm bells on property prices in the city center.

Kandiyoti is no stranger to Portugal. His family has been dealing with the southern European country for almost three decades through a separate textile-trading business. They decided to invest in real estate after Portugal requested international aid in 2011 because there was a “window of opportunity” to invest in a country that was “fighting back,” he said.

“We wanted to be part of that,” said Kandiyoti. “It’s great to be in a nation that is coming from a crisis, rebuilding itself, regaining its confidence. That confidence is back now. It’s up to the roof.”

Today, as Lisbon’s real estate bonanza continues to drive prices higher, Kandiyoti says it’s time to invest in more affordable real estate projects for locals. His company is currently building three new apartment buildings in Miraflores, a residential area seven miles west of Lisbon, for families and a “new type of Portuguese who is coming back and can afford it,” said Kandiyoti.

Property prices at Kandiyoti’s Jardim Miraflores project range from 3,500 euros to 5,000 euros per square meter. That’s less than half the price of an apartment in Lisbon’s Avenida da Liberdade, where one square meter can cost 10,500 euros, according to real estate broker Jones Lang LaSalle Inc.

“At the end of the day it’s only the foreigners who can afford it,” said Kandiyoti, referring to prices in the city center. “The Portuguese are just leaving the city. What will happen if the foreigners decide to move out?”

Also read: Europe’s Hottest Property Market Is Getting Too Hot for Some

Portugal became a magnet for foreign property investors who snapped up real estate across the country as the economy began to recover from the bailout by the European Union and the International Monetary Fund. A government decision in 2012 to offer residence permits to property buyers and tax incentives to foreign residents helped fuel a boom that has transformed the face of Lisbon’s hills with new hotels, Airbnb apartments and co-working spaces for a new wave of foreign residents.

Foreign home buyers accounted for 8.2% of all property purchases and 13% of the value of real estate deals in Portugal in 2018, according to the Lisbon-based National Statistics Institute. Kandiyoti, who invests in affordable housing projects in Belgium, said he would like Lisbon to have a clear policy on affordable housing as he starts investing in that sector.

Prime Minister Antonio Costa, who won a second term in an Oct. 6 general election, has vowed to continue to carry out measures to attract foreign investors. His country needs them. After growing for five consecutive years, Portugal’s economy is facing headwinds from the European Union, its main export market, as Germany flirts with a recession amid increased risks of a no-deal Brexit and an intensifying trade war.

In a bid to stop residents from moving to the suburbs, Portugal’s government began offering tax cuts to property owners who offered discounts to their tenants through a so-called affordable rent program. The program has attracted very few families since it began in July, weekly newspaper Jornal Economico reported on Sept. 10, citing Prime Minister Antonio Costa.

Rising real estate prices in Lisbon have created a dilemma for Kandiyoti, who says he doesn’t want to buy property in the city center because it’s too expensive but he won’t sell his own assets either.

“Where can you invest your money and have returns like in Lisbon?” said Kandiyoti. “So many people in my street in Brussels moved to Lisbon and they didn’t move for the tax reasons. They moved because of the quality of life.”

To contact the reporter on this story: Henrique Almeida in Lisbon at halmeida5@bloomberg.net