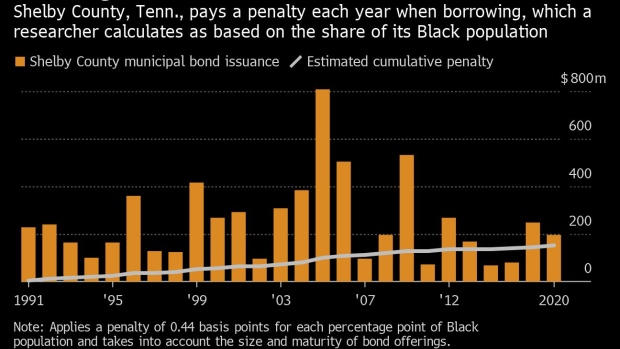 (Bloomberg Markets) -- Althea Greene walks under exposed pipes and into an auditorium, where the chairs are broken and splintering. Treadwell Middle School, built in 1943, looked pretty shabby when Greene was a student here in Memphis 50 years ago. On this August morning, Greene laments that little, if anything, has changed. “We’re lucky it’s still standing,” she says.

No doubt. That same month, a library’s ceiling collapsed in another Memphis school. It had been built 90 years ago. Greene is touring Treadwell because she’s vice chair of the school board, responsible for the 110,000 Memphis children in Tennessee’s largest school system. At another building she visits later that day, water leaks through the ceiling, seeping under the tiles of a classroom and rendering it unfit for students. Not far away, a burst water pipe overflowed into a high school football field, leaving the team to practice in the mud.

There’s a familiar reason the Memphis-Shelby County schools are in sorry shape: Lacking basics such as air conditioning, locks, intercoms, and outdoor lighting, they face $400 million in deferred maintenance. The system relies partly on local property taxes, and its students tend to come from poor families.

Now, scholars in the vanguard of finance, accounting, history, and geography say something else could be making matters even worse: racial bias in the $4 trillion US municipal bond market. To pay for new schools and other major projects, places such as Memphis pay higher interest rates simply because they’re majority Black, the researchers say. They call it the “Black tax.”

Studies are documenting just how much more Black communities pay, as well as the role of racial bias. Finance experts know that many Black communities have higher unemployment and lower incomes—which leads to lower bond ratings and higher interest rates. So the academics are studying reams of bond offerings, attempting to adjust for this situation by comparing communities alike in every way except for race.

Matthew Wynter, a finance professor at Stony Brook University in New York, estimates that Shelby County, which funds Memphis schools, is paying $5 million more each year because of its Black population. Since 1990, he figures, the county has paid $150 million more—enough to wipe out almost 40% of its deferred maintenance expenses. Add up those sums across the US, and the penalty amounts to $900 million annually, more than the entire annual budget of the City of Memphis, according to an estimate by researchers at money manager Breckinridge Capital Advisors Inc. in Boston. “We were shocked,” Wynter says. “It’s pretty ubiquitous.”

Policymakers are taking notice. Last year the US House Financial Services Subcommittee on Oversight and Investigations held a hearing on racial inequity in the municipal bond market. It focused largely on a paper finding that historically Black colleges and universities pay more when issuing munis. Al Green, a Texas Democrat who chairs the subcommittee, called the findings “profoundly troubling.”

The National League of Cities is examining this issue with a $4 million grant from the Robert Wood Johnson Foundation. In July the Brookings Institution’s annual municipal finance conference, which attracts scores of academics and other experts from across the country, held a session on the Black tax. “Regulators are watching and taking evidence very seriously,” says Justin Marlowe, a professor at the University of Chicago and one of the conference’s organizers, citing the US Securities and Exchange Commission and the Municipal Securities Rulemaking Board. The MSRB says it’s looking at the research. The SEC declined to comment.

Bank of America, Citigroup, and JPMorgan Chase, the biggest US municipal bond underwriters last year, also declined to comment, as did other companies asked to discuss the issue. But Gary Hall, who leads public finance at Siebert Williams Shank & Co., the largest ­minority-owned investment bank, defended the industry in the congressional hearing: “We would not have repeat clients if we didn’t obtain the lowest cost of financing possible based on fundamentals of credit and risk.”

In his office overlooking the Mississippi River, Shelby County Mayor Lee Harris, a Yale-educated lawyer who grew up in Memphis, says he doesn’t know exactly what to make of the idea of a Black tax. Like many municipal officials, Harris, who’s Black, says he doesn’t know enough about the market’s intricacies. “If the interest-rate variation is high just based on the minority population, that would be really troubling and problematic for us because we do a lot of borrowing,” says the mayor, whose county has about $1 billion in debt.

One thing Harris does know: The schools are in terrible shape, and millions of dollars could make a world of difference. Memphis hasn’t built a new high school for 14 years. “And we have got to make that happen,” he says.

In his 2021 book, The Bonds of Inequality: Debt and the Making of the American City, Destin Jenkins, an historian at Stanford, discovered that the Black tax has deep roots. In troves of records from post-World War II San Francisco, he found that bankers had a dim view of the creditworthiness of non-White communities. For example, in 1966, the winning entry for the Investment Bankers Association of America’s annual essay contest argued that Black populations should be considered “deleterious factors” in bond ratings.

In a 2009 study, John Yinger, an economics professor at Syracuse University, found that with each 1 percentage-point increase in a community’s Black population it becomes between 1 percentage point and 1.5 percentage points more likely to be given a low bond rating. Yinger considers it evidence that bond raters, which didn’t respond to requests for comment, were engaging in the muni market equivalent of redlining, the banking practice of refusing to offer mortgages to customers in Black neighborhoods. Yinger posted the study as a comment on the SEC website but hasn’t heard back. In research published last year, Sage Ponder, a geography professor at Florida State University, examined 4.9 million bonds that Baltimore, Detroit, Memphis, and other predominantly Black cities issued between 1970 and 2014 and reached a similar conclusion.

Stony Brook’s Wynter dug into the muni data after the murder of George Floyd in 2020. Wynter had grown up around banks; his mother, a Jamaican immigrant, worked at one in Richmond, Va. With co-authors Ashleigh Eldemire at the University of Tennessee at Knoxville and Kimberly Luchtenberg at American University, he studied 66,500 municipal bonds, along with measures of each community’s race, income, and employment. The goal was to compare bond offerings that were essentially identical, except for race. His main finding: Issuers pay a little less than half a basis point (half of one-hundredth of a percentage point, the difference between 3.00% and 3.005%) more in borrowing costs for every additional percentage point of Black population.

For majority-Black communities, that tiny figure can add up to real money. Consider Shelby County. It’s 55% Black. Wynter figures it pays about 24 basis points more than a financially similar White community. That amounts to a $150 million penalty since 1990. Sophia Anthony, a spokeswoman for Goldman Sachs Group Inc., the underwriter for the biggest share of Shelby County’s debt in that period, declined to discuss these figures or the researchers’ other findings. As part of its socially responsible investing initiatives, Breckinridge Capital, working with Duke and Northeastern University researchers, found a Black tax about half the size of Wynter’s. Even then, when they did the math for the entire US, it came to almost $900 million a year.

The most benign reason for the penalty would be that the data don’t fully account for a difference in the finances of the municipalities they’re comparing. The least: Investors don’t like Blacker cities. To look for evidence of discrimination, Wynter and other scholars reviewed measures of what social scientists call “racial animus”—for example, racially charged tweets about President Barack Obama’s reelection. Did regions with higher measures of animus punish Blacker cities?

The muni market is a good laboratory for testing this hypothesis. Buyers are likely to know the demographics of cities when they purchase bonds. Potential buyers often look first at their state’s bonds because their income is free of state, as well as federal, tax. Individuals, investing with their brokers, make up much of the market. In municipalities with higher levels of racial animus, Wynter and others found, the Black tax was higher. Or, as Wynter puts it, they were “less willing to hold assets that are associated with Black people.”

The history of the Memphis-Shelby County school system magnifies the impact of any Black tax. Around 2013, White suburbs voted to secede from the county, forming their own school districts. Breaking out on their own made the suburbs financially stronger and Memphis weaker. Today, Fitch Ratings Inc. considers Shelby County’s creditworthiness to be AA+, just below the highest level. Collierville, one of the breakaway White suburbs, gets Aaa, the highest rating, from Moody’s Investors Service Inc. (In his research, Wynter didn’t compare Shelby with Collierville but to a composite of financially similar issuers.)

In 2015, Collierville sold more than $90 million in bonds in part to pay for a new, 450,000-square-foot high school with a 1,000-seat auditorium, sun-drenched library, welding lab, and culinary arts classroom with multiple six-burner ranges. Its athletics complex, with an artificial turf field and three gyms, could be mistaken for an NFL training center. A Jumbotron hangs over the 5,000-seat stadium. (Collierville superintendent Gary Lilly says the system can afford these amenities because, unlike Memphis, it has a separate tax for schools.)

A 30-minute drive away, at Memphis-Shelby County’s Craigmont High School, the football fields are overgrown and lack markings for yard lines. It was here, at the end of summer, that the water pipe broke, soaking the field. A green discharge, which looks like mold, cakes the walls of the showers, rendering them unusable.

On an August afternoon, in the first days of the school year, Marcus Randolph Jr., a 17-year-old senior, wraps up practice as a cornerback. His dad points to an ancient weight machine. “This right here I know Jesus used,” Marcus Sr. jokes. A truck driver who’s ferrying kids home this afternoon, he says his son has NFL dreams. As of early September, the football team was undefeated, despite the state of the field. “They succeed, not because of, but in spite of,” he says.

The school leadership is fighting for a long-term fix to its decrepit buildings as part of what it calls “Reimagining 901,” after the Memphis area code. Over the next decade the schools need $55 million a year, a sum that will almost certainly require more borrowing.

Back at Treadwell Middle School, Greene, the school board vice chair, walks over cracked floor tiles, through hallways lined with scuffed red lockers and aging wooden doors. She points to the faded figure of an eagle, the school mascot, etched over a doorway. “That’s probably the oldest dirt in the whole building,” she says, before ducking into the cafeteria. It’s so small that some kids have to eat lunch as early as 9:30 a.m.

Greene herself demonstrates the school’s importance to the community. After graduating from college, she returned to work in the school system for 38 years, serves as a bishop in her church, and owns a restaurant and catering service. Even with its deteriorating building, Treadwell, where children wear uniforms in the red, black, and gray school colors, is one of her district’s top-performing schools. It’s produced many leaders, such as NBA star Penny Hardaway, who now coaches the University of Memphis basketball team. “We are the hidden gem,” says the principal, Brandon Hill. He’s been meeting with an architect and dreams of a larger school cafeteria and even an indoor swimming pool. After a century, if all goes well, Treadwell will finally be demolished and replaced with something new.

Querolo is a reporter covering municipal finance in New York.