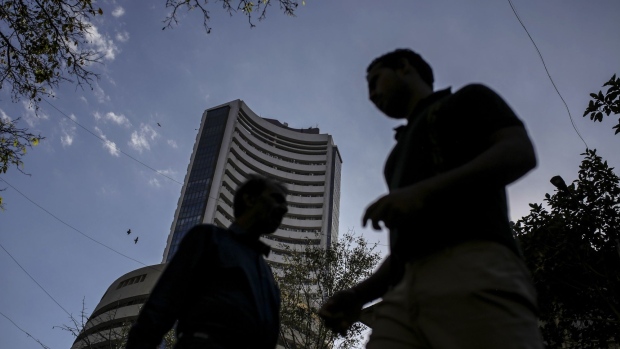 Pedestrians walks near the Bombay Stock Exchange (BSE) building in Mumbai, India, on Monday, March 9, 2020. A top Indian official said there's no need for the government to take immediate steps to support the economy following a crash in oil prices that has sent financial markets into a tailspin. , Bloomberg

The darkening economic backdrop to the U.S. equity rally is translating into booming demand for a breed of young funds that promise to both share in gains and cushion losses.

Investors have poured more than US$2.2 billion this year into exchange-traded funds known as buffers, which seek to shield them against a certain percentage of declines in return for a cap on their potential upside.

Fear of missing out on the S&P 500’s march back toward a record combined with rising coronavirus cases is boosting the appeal of these defined-outcome products, reckons Bruce Bond at Innovator ETFs. The firm launched buffers in 2018, targeting retail investors and financial advisers looking to manage risk.

“They’re just completely exposed to the tragedy and the upside of the market,” said Bond, Innovator’s chief executive officer. “The more sophisticated investors, they control that exposure.”

The good news for investors piling in is that so far this year, buffer funds have performed as promised.

At the height of March volatility, the US$246 million Innovator S&P 500 Power Buffer ETF, ticker POCT, was down 17.5 per cent for the year compared with a 30 per cent slump for the S&P 500. Five months later, the U.S. benchmark is up about 4 per cent and the ETF has gained around 2.6 per cent.

Meanwhile, the largest buffer fund on the market is the FT Cboe Vest U.S. Equity Deep Buffer ETF - February, which has gathered US$510 million in assets since launching six months ago. The debut was well-timed, according to Cboe Vest’s Karan Sood -- the virus-fueled turmoil in the weeks which followed showed a traditional portfolio mix of 60 per cent equities and 40 per cent fixed-income failed to effectively shield portfolios.

“In March of this year, everything went down together,” said Sood, Cboe Vest CEO and a portfolio manager of the fund. “This style is not dependent on historical relationships holding up in the future, it’s forward-looking.”

Such a strategy would protect investors from the growing duration risk -- a measure of sensitivity to interest rate changes -- as long-dated Treasury yields fall, Bond said.

“If you want to stay invested in fixed-income today you either need to get in a money-market fund or go super short-term,” he said. “This allows you to stay in long Treasuries in a 60-40 type portfolio mix, but cuts off the risk tail.”