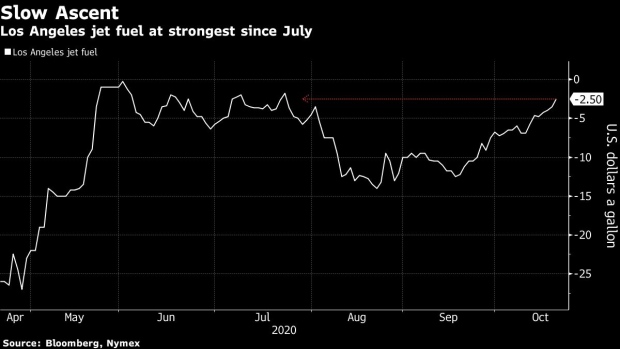 (Bloomberg) -- A rebound in both commercial and cargo flights on the U.S. West Coast is a good sign for the global oil market that is still facing the lingering consequences of this year’s collapse in air travel.

Physical barrels of jet fuel in Los Angeles are trading at the smallest discount to Nymex futures in since July as the market for the fuel picks up. At the same time, the cargo hub in Alaska is doing so well it saw record jet fuel imports from South Korea in the third quarter, according to Vortexa Ltd., a tanker analytics firm.

“It looks like the demand decline is slightly less out here than the overall U.S.,” said John Faulstich, an oil analyst at Stillwater Associates in Irvine, California.

The West Coast is traditionally the biggest consumer of jet fuel with transpacific flights for passengers and cargo supporting demand. Departures in both Los Angeles and Asia Pacific nations increased in the week ending October 20, while traffic in other regions declined, according to BloombergNEF. The market for jet fuel made up about 8% of the global oil market pre-pandemic.

Despite refiners having issues getting rid of jet fuel or injecting it into diesel supplies, the region is attracting imports from Asia.

Recent Asia jet fuel shipments to the West Coast, according to shipping data compiled by Bloomberg:

West Coast refiners have kept jet fuel supply largely under control. With the exception of last year, stockpiles last week seasonally were at their lowest in the region since 2005, according to the Energy Information Administration.

​In another indication of recovering demand, passenger traffic through U.S. airports last Sunday topped 1 million people for the first time since March.

Still, the outlook for a robust demand rebound is still bleak. Valero Energy Corp. is keeping distillates-focused units at one of its Texas refineries shut because of weak consumption and Bank of America Corp. analysts see weak jet demand delaying a full recovery for middle distillates until 2023.