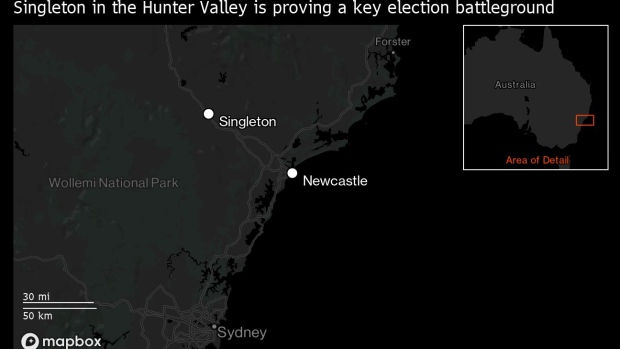 (Bloomberg) -- A coal-mining community that has elected the same political party for more than a century could decide Australia’s next government this month in an election that has divided the nation over how to battle climate change.

Poll after poll has shown that the majority of Australians want to cut greenhouse gas emissions, but with the ruling conservative Liberal-National coalition holding power by a single seat and the two main political camps almost neck and neck, it could come down to a handful of constituencies where an abrupt end to coal mining would devastate communities, leaving thousands of workers without jobs.

At stake is the policy of a nation that is a potential renewable-energy superpower but still gets 70% of its electricity and about a quarter of its exports from fossil fuels. Hastening an end to the nation’s vast coal industry would make a major contribution to the global effort to limit planetary warming.

With campaigning reaching a crescendo before the May 21 vote, the spotlight has fallen on Hunter, an electorate about the size of Jamaica some 100 miles north of Sydney, and famous for wine and coal. The Hunter Valley is one of huge contrasts, with bucolic century-old vineyards along the winding Hunter River bookended by some 40 operating mines to the west and the world’s largest coal-export port of Newcastle in the east.

Ravaged by the bushfires of Australia’s “Black Summer” two years ago, but dependent on fossil fuel sales, it is the nexus of the country's climate dilemma, and helps explain the political paralysis that's left the nation largely silent in efforts to craft global policy to accelerate action on emissions.

Almost one in 10 workers in Hunter are directly employed by the coal mining industry, a blue-collar legacy that made it a safe bet for 112 years for the center-left Labor Party. In recent elections, Labor’s promises to accelerate the fight against climate change have spooked many traditional supporters, threatening to hand the seat to the ruling coalition headed by Prime Minister Scott Morrison, who once famously brandished a lump of coal in parliament in support of the fossil fuel sector.

Now with Labor narrowly ahead in opinion polling, winning Hunter could be vital for Morrison to hang on to power. In the last election in 2019, Labor’s strong climate-change action promises caused a 9% swing to the government. A similar shift this month would see Morrison’s party win the seat for the first time.

But it’s a delicate balancing act for both sides. To garner support from the country at large, Morrison and opposition leader Anthony Albanese have been burnishing their climate credentials. A survey last year by the Sydney-based Lowy Institute showed that 55% of Australians now say the government’s main priority for energy policy should be “reducing carbon emissions.” In Hunter, though, the political campaigns are all about promising to save jobs and keep the coal industry going long enough to safeguard livelihoods.

“Hunter Valley coal is the best coal in the world, so while there is still a market for coal, it will continue to be serviced by the mines of the Hunter Valley,” said Matthew Swan, the Port of Newcastle’s business development manager, in his office overlooking docks that ship more than 150 million tons of the fuel a year.

On the hustings, Repacholi effortlessly bonds with workers dropping in from the local pits and businesses, but his party’s traditional reputation for bolstering miners’ rights has been eroded by its strong climate-change stance. Labor has pledged to reduce emissions 43% by 2030 and boost the share of renewable energy to 82%, with a net zero target by 2050.

For Morrison’s government, the balancing act is even harder. There’s a growing sense that voters could punish his conservatives at the election after almost a decade in power during which they tore up one of the world’s first carbon-trading programs and refused to significantly penalize polluters. Australia has one of the largest per-capita emissions tallies in the developed world and climate scientists have linked a wave of natural disasters under Morrison’s watch to climate change, including the “once every 1,000 years” floods that smashed the continent’s east coast this year.

The government did finally set a 2050 net zero target ahead of last year’s Glasgow climate summit, but hasn’t set new interim goals and its outline for change has been criticized for relying on technologies still in development, such as hydrogen, to deliver the bulk of emission reductions.

In a speech in Perth on Saturday, Morrison said that if re-elected, his government would tackle climate challenge “in a way that maintains competitiveness of our traditional industries — not writing those industries off, but strengthening them in efficient and technologically advanced ways.” The government’s candidate for Hunter, James Thomson, did not respond to requests for an interview.

For workers in Hunter, the key is not to keep the coal industry going at all costs, but to come up with a realistic way to transition to clean energy without destroying the community.

“The idea that someone is going to be able to walk out of a mining pit on Friday and rock up at a hydrogen factory on Monday and do a course over the weekend -- that’s not how it works,” said Warrick Jordan of the Hunter Jobs Alliance, established by a group of unions and environmental groups to help navigate the energy transition.

Singleton, in the heart of the coal-mining region, is one of seven local government areas out of more than 500 surveyed by the the Centre for Policy Development that would be “severely” impacted by global decarbonization. Eliminating fossil fuels could affect about 300,000 jobs throughout Australia connected to coal, oil and gas exports, the center said.

“We’re not planning for the future,” said Sue Gilroy, head of the Business Chamber in Singleton, which has a population of about 22,000. “We could be diversifying and growing the other industries and the other opportunities that we have in the Hunter.”

Those other industries include the nation’s oldest vineyards, dating back as early as the 1820s, which have a pressing need to address global warming.

More than 2,600 hectares (6,425 acres) of the valley are now under vines, including estates such as Tyrrell’s, Brokenwood and Mount Pleasant. Steadily rising temperatures over the past decades have forced growers to take steps to protect harvests, such as increasing irrigation and spraying vines with sunscreen.

Extreme weather has also pushed more people to worry about the effects of climate change in the region. Until the bushfires two years ago, Fiona Lee believed the effects of global warming would only be felt by future generations. Her house near the Hunter Valley was one of about 3,000 destroyed during Australia’s 2019 and 2020 bushfires after a prolonged drought. Now she’s a full-time climate activist.

“There’s been quite an awakening in Australia” after the blazes, Lee said from an office where she coordinates opposition to a planned A$600 million gas plant in the town of Kurri Kurri. “There needs to be much more money in the Hunter to support workers in the transition. I can’t believe there’s no plan.”