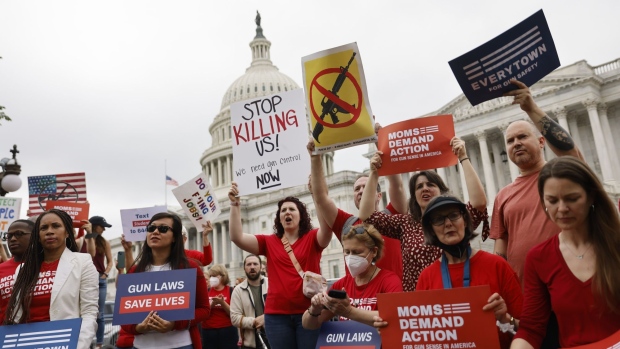 Demonstrators during a rally calling for action on gun safety on Capitol Hill in Washington, D.C., US, on Thursday, May 26, 2022. In the wake of the school shooting in Uvalde, Texas, in which 19 students and two teachers were killed, students across the country are once again planning to walk out as a form of political action against gun violence. , Bloomberg

(Bloomberg) -- Senate Democrats said they were a bit more optimistic about a compromise with Republicans on gun-control legislation responding to the massacre of 19 elementary school children and two teachers in Texas. Then they left town for a 10-day recess.

Many lawmakers will return home and meet voters as the carnage in Texas continues to dominate the news, giving added urgency to seeking some action -- even if it’s less comprehensive than many Democrats want -- on school shootings.

“This feels different right now,” said Democratic Senator Joe Manchin, whose bill to expand background checks for firearms buyers in the aftermath of the nation’s worst school shooting – at Sandy Hook elementary school in Newtown, Connecticut -- a decade ago was blocked by Republicans.

Lawmakers said they plan to continue negotiations by telephone during the recess.

Democratic Senator Chris Murphy of Connecticut said he would be willing to take more incremental steps than Democrats embraced in the immediate aftermath of the 2012 Newtown massacre, in which 20 children and six teachers were killed.

“I don’t want to overstate my optimism though,” Murphy, who has been one of the leading advocates to tougher firearms laws, said. “I’ve been Charlie Brown enough times to know that up until now the football has been pulled out from under me every single time.”

Senator Richard Blumenthal of Connecticut also said he’s hopeful the two parties can agree at least to a limited measure. He said he’s getting some positive feedback on legislation he’s co-sponsoring with GOP Senator Lindsey Graham that would give incentives to states to set up “red-flag” laws that allow courts to take weapons from people seen at risk of carrying out violent acts.

“I’ve talked with a number of colleagues about it already today. I’ve shown them some of the provisions and they’re very encouraging,” Blumenthal said.

Graham, a South Carolina Republican, said the legislation will allow due process for those at risk of losing their weapons, which could attract more GOP support than other red-flag proposals circulating.

Still, it would take at least 10 Republicans to agree to legislation to overcome any filibuster in the 50-50 Senate.

Majority Leader Chuck Schumer said Democrats will give “a little more time” to see if Republicans can agree to a package of gun-safety measures. If a deal doesn’t come about, he said he’ll force Senate votes on two House-passed gun control bills to  put Republicans on record in opposition.

Many Senate Republicans this week said they don’t think a legislative response is appropriate, including Jim Inhofe of Oklahoma and Kevin Cramer of North Dakota. Senate Minority Leader Mitch McConnell on Thursday said he’s deputized GOP Senator John Cornyn of Texas to see if a compromise can be reached, but he indicated it should be narrowly focused.

“I am hopeful that we could come up with a bipartisan solution that’s directly related to the facts of this awful massacre,” McConnell told CNN.

Texas authorities have said the suspected gunman in the attack had no criminal record that would have triggered alarms on an instant background check when he bought the semiautomatic rifle used in the shooting.

Murphy, who is leading the negotiations, said ideas on the table include expanded gun background checks, the red-flag proposals and school-safety provisions. Murphy didn’t disclose how many Republicans are taking part in the talks but senators said they expect to continue talking during the recess.

The White House on Thursday endorsed efforts by Senate Democrats to negotiate a bipartisan agreement to address gun violence and said Biden would defer to leaders on Capitol Hill on the “mechanics” of how a deal came together.