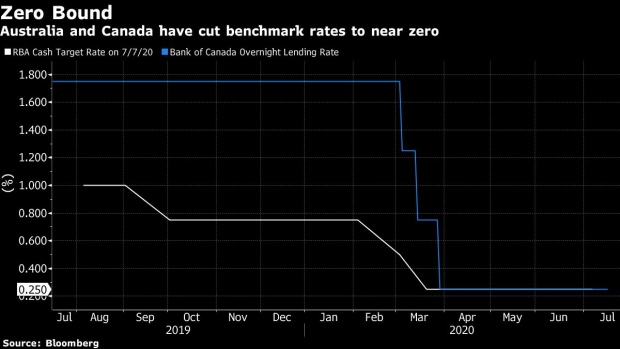 (Bloomberg) -- A bread-and-butter source of returns for macro hedge funds is getting re-thought in the age of Covid-19.

The Australian and Canadian dollars now rank among the most efficient for funding carry trades, in which investors borrow those currencies at low interest rates to fund purchases of higher-yielding assets in emerging markets. That’s a reversal of how these trades worked in the past, when assets in those two countries were popular purchases in carry trades.

It’s a reflection of the rapidly shifting economic environment brought on by the coronavirus pandemic, and potentially adds a new driver of foreign-exchange rates for the Group-of-10 nations. It’s not without risk, however, since an acceleration in the global economy and an increase in commodity prices could strengthen these currencies and burn traders who have shorted them through carry trades.

“The Aussie and Canadian dollar are no longer hindered by positive yield, because their central banks have moved rates down to virtually zero,” said Adam Cole, head of currency strategy at Royal Bank of Canada. “The euro, which was the prime funding currency for EM, has been replaced -- by the way we look at things -- by Australia and Canada.”

Carry trades have been a mixed bag for hedge funds over recent years as low interest rates around the world reduced returns available. Using the Canadian and Australian dollars as funding currencies to purchase higher-yielding emerging market assets, however, would mark a new twist on an old trading strategy.

Although still positive, unlike some of their G-10 counterparts, bond yields have followed policy rates lower in Australia and Canada, with 10-year rates sliding to about 0.88% and 0.51%, respectively. By comparison, yields are more than 9% in South Africa, almost 6% in Colombia and about 6.5% for local-currency debt in Brazil.

Despite the low yields, the Australian and Canadian dollars still trade in the same direction as broader emerging markets. That makes them attractive funding currencies since a higher correlation dampens the foreign-exchange volatility that is a key risk to any carry strategy.

Given the convergence of rates, these currencies “have become more fungible, in terms of being a funding currency versus a higher carry currency like emerging markets,” said Ed Devlin, independent investor and former portfolio manager at Pimco Canada.

Since March 1, the Canadian dollar has been the most-correlated among G-10 peers to EM currencies like the South African rand, the Colombian peso and the Brazilian real as calculated by daily returns, according to Bloomberg data. The Australian dollar, meanwhile, has also ranked near the top, along with the Norwegian krone.

In Canada, specifically, where the government continues to wrestle with the long-term impact of fighting the economic downturn caused by Covid-19, investors may have reason to dump the currency and look overseas for returns, according to Pimco.

“Canadian fixed-income investors will stand to benefit even more from diversification of their portfolios outside their home market,” including by investing in areas like “global financial credit and select high quality emerging market sovereigns,” wrote Pimco’s Tiffany Wilding and Vinayak Seshasayee in a note.

That said, not all investors are sold on using the formerly high-yielding currencies to fund carry trades. By most metrics, the U.S. dollar is overvalued, boosted in March and April by a flight to havens as the coronavirus threw markets into turmoil.

Assuming economies continue to reopen and global growth ticks upward, any future depreciation in the greenback should help to support other G-10 currencies, weakening their attraction on the short side of carry trades.

“I look at Aussie, I look at Canada, I look at euro -- all these currencies are undervalued against the dollar, and therefore the dollar is going to be under some pressure,” said Paresh Upadhyaya, director of currency strategy and a portfolio manager at Amundi Pioneer Investment Management. He also thinks current market positioning points to further upside for the currencies.

Nonetheless, the interest-rate differentials Australia and Canada now have relative to emerging markets remains a new factor to consider as investors search for yields in an environment where, within the G-10, they are expected to stay low for a considerable period of time.

The use of the Australian and Canadian dollars as efficient funders “will definitely be in the mix of drivers, along with all the other things we usually see” affecting exchange rates, said RBC’s Cole.