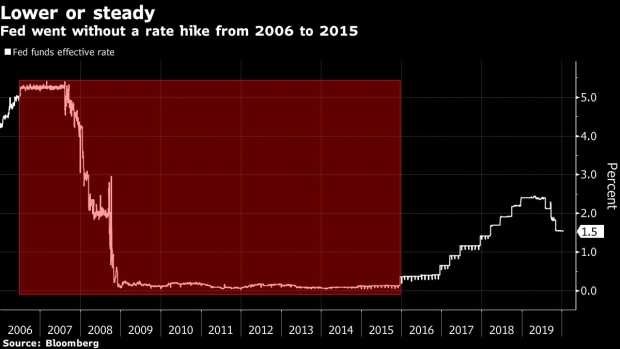 (Bloomberg) -- Bond managers are starting to contemplate the prospect of another decade without a Federal Reserve interest-rate hike.

Forecasting that far out may seem like a fool’s errand. But the central bank’s inability to push inflation sustainably above its 2% target, even after three 2019 rate cuts amid the strongest job market in 50 years, gives that outlook more weight, they said. The scenario rejects the notion that last year’s easing was a sort of insurance move that could be quickly reversed under an improving economy.

The last time the U.S. went close to a decade without a rate increase was 2006-2015, as the economy absorbed the financial crisis and recession. That turmoil helped propel Treasuries’ bull run, which last year delivered the best annual performance for U.S. government debt since 2011.

As a result, yields are within about a half-percentage point of record lows, and are approaching zero after factoring in the Fed’s preferred measure of inflation. That’s dimming Treasuries’ appeal for some. Investors may look to build more of their portfolios with emerging-market debt or agency, asset-backed and corporate debt, which offer extra yield above U.S. government securities.

“Yields are going to stay low for longer in the U.S., and the bar is very high for the Fed to tighten rates,” said Jack McIntyre at Philadelphia-based Brandywine Global Investment Management, which oversees $75 billion in mostly bonds. “Even if inflation trends higher, the Fed is going to be slow to respond to that in order to avoid having us going down the same path as Japan and Europe.”

McIntyre says he’s moved away from Treasuries over the past year, though he does like 30-year bonds. He’s been buying sovereign debt of Indonesia, Mexico, Malaysia, Brazil and Colombia -- where 10-year yields can be around 3% or higher. He sees an opportunity for price appreciation in those assets, something he expects will be scarcer in developed markets.

McIntyre helps manage Brandywine’s $2.9 billion Global Opportunities Bond Fund, which trailed most of its peers with a 6.9% return during the past year. He says the fund lagged amid a strong dollar, but could do better should the greenback weaken and provide a tailwind.

The U.S. and global economies will avoid a downturn over the next three years due to monetary and fiscal-stimulus worldwide, in his view. But he says growth won’t be enough to boost domestic inflation consistently above 2% or to get the Fed to hike anytime through 2028. The last increase was in December 2018. Long-term, inflation will be capped by demographics, technology and globalization, similar to how these forces have impacted Japan and Europe, he says.

This outlook on rates is far from universal: Amherst Pierpont Securities LLC and Goldman Sachs Group Inc. are among firms anticipating a Fed hike in the next two years, though the median expectation in a Bloomberg survey is for no change. The consensus for U.S. yields is for a steady, albeit modest, drift higher, even if inflation isn’t expected to budge much above 2%.

Traders see the Fed’s next move as a cut, potentially by the end of 2020. Fed officials, for their part, are signaling policy is likely to be on hold.

Western Asset Management Co. agrees that the Fed’s 2019 rate cuts are unlikely to be undone soon, though its forecasts don’t go as far out as 2028, says portfolio manager Julien Scholnick.

The firm, which manages $453 billion in mostly fixed income, is positioning for a Fed that stays on hold even if the economy improves and inflation drifts up to 2% -- by taking a “barbell approach” favoring 2-, 5- and 30-year Treasuries for now.

Those maturities should see limited sell-offs with front-end yields pinned around current levels during the Fed’s pause at a 1.50%-1.75% fed funds rate target, even if growth accelerates, Scholnick said. And he sees little catalyst for long-dated yields to climb absent meaningful inflation.

Scholnick helps manage the $31 billion Western Asset Core Plus Bond Fund, which returned 11.7% in the past year, outpacing most competitors.

For Western Asset, in Pasadena, California, a U.S. recession isn’t the most likely outcome, although the median forecast in the latest Bloomberg survey has one starting in 2021. But Scholnick says a decade without a Fed hike can’t be ruled out if a downturn hits.

“We’re in a low-growth and low-inflation environment not only here but on a global basis, and we don’t think Fed officials are going to be reversing what they’ve done with rate cuts over the next year,” he said.