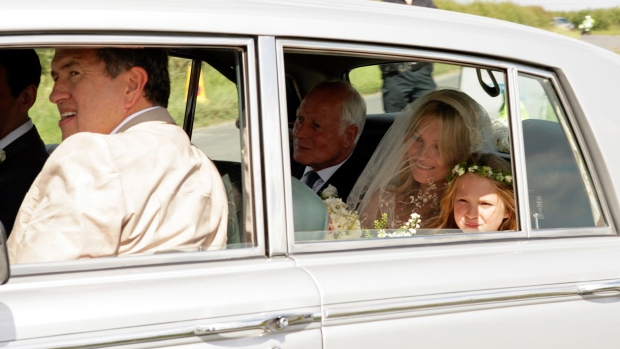 (Bloomberg) -- Last week in broad daylight on the side of the A361, Kate Moss experienced the fate that all who own vintage cars face at one time or another: Her MG broke down. Stars! They’re just like us.

The 47-year-old model and pride of British fashion plates, “our Kate” eventually found rescuers in the chaps at Lechlade-based Morse Motors (and their flatbed). Presumably, she returned safely to her cottage in West Oxfordshire to brood, undisturbed, with  signature nonchalance.

Katherine Ann Moss, as you will know, is beloved for her tres cool style, her love of a good party and a good smoke, and a few great quotes.

There’s another part of her oeuvre that, to my mind, is insufficiently admired by the masses: Moss has great taste in classic cars.

That model that faltered on the highway near Burford was an MG Midget in bright blue, a tiny convertible MG debuted in October 1966 with the tagline “the smallest real sports car,” according to historical records from Hagerty. Listed affordably at $2,174 at its incarnation, the MG came with three gears, black rocker panels, and a top speed of roughly 95 mph—a winning combination for anybody, supermodel or not.

“The Mk III was the most popular Midget of this body style, with 100,246 finding owners,” Hagerty notes in its buyer’s catalogue. “Paint colors were bright and cheery, and the car handled well until the front lever shocks wore out. The quarters are cramped for drivers taller than 5 feet, 9 inches tall, however, and the road and wind noise make a radio almost unnecessary.”

So it’s a good thing Moss is not as statuesque as some of her contemporaries. At 5 foot, 7 inches, she is among the shortest models ever to reach the pinnacle of modeling success. But the car suits her perfectly in another way, too: just like Moss’s collaboration with Topshop, which mixes a high-fashion sensibility with affordable clothing, the car combines a cool, original design (good enough for Prince Charles) with a low price tag. Since the average cost of one in running condition hovers around $5,700, an MG Midget is one of the most economical ways to get into vintage motoring.

The MG isn’t Moss’s only quirky and inexpensive British car. She has also owned an ivory Mini coupe, which she used for her driving test in 2001; it appears that she gave it to her daughter, Lila Grace, as a birthday present last year, given that the car has the same bodywork and plates.

At the time of its launch in 1959, the adorable Mini cost just $1,340. Even today, a Mini in good condition from that era can be had for $12,000 or so, according to the Hagerty price guide. The fact that it is affordable doesn’t make it any less significant—or stylish.

“Alec Issigonis’s tiny Mini sedan can lay claim to being one of the most significant automobile design of the 20th Century,” Hagerty states. “The simple design broke all the rules, what with its transverse-mounted, four-cylinder engine, front-wheel drive, transmission in the sump, a wheel at each corner, and suspension by simple rubber cones.”

Issigonis earned a knighthood for his design.

Still, Moss’s appreciation for collectable cars extends far beyond the bounds of those that cost the same as an entry-level Chanel handbag. For years she drove her old black cab around London, which runs to £35,000 ($48,000) or so in aftermarket sales. (One might make some of that back moonlighting as a cabbie.)

The 1971 Mercedes-Benz 280SE she drives (which apparently belongs to her partner, Count Nikolai Von Bismarck) and her Mercedes-Benz 280SL Pagoda are worth $105,000 and $64,300, respectively, according to Hagerty values. And that sinister-cool black Porsche 911 from the early 1970s that she drove extensively after friends gave it to her for her 40th birthday in 2014—long wheelbase version, mind you—would take an easy $100,000 at auction.

My ultimate favorites in Moss’s collection are her Rollers. (Rolls-Royce representatives have told me they hate people using the term “Roller,” but I’m channeling Kate, who I doubt is much inclined to cave to the demands of publicists.) They include a 1964 Rolls-Royce Silver Cloud, and most famously, the 1979 Rolls-Royce Silver Shadow used as a getaway vehicle when she married Jamie Hince in 2011; the wedding brigade arrived in a fleet of Silver Shadows.)

Each Silver Shadow is an ode to British patrimony and tradition. With a gleaming, tall grille and a Spirit of Ecstasy goddess helming the mast, it strikes the right balance between faded glory and pomp and circumstance, making the driver feel like a million dollars anywhere, even though it costs a fraction of that sum. I should know: Moss’s open love for her Silver Shadow undoubtedly sent my subconscious screaming when I first saw the olive-green, extra-long-wheelbase 1975 Rolls-Royce Silver Shadow that became my only car last year.

Old British cars don’t have the most stellar reputation for reliability, and owning a Silver Shadow requires more thought and care than needed for something brand new. “There’s nothing as expensive as a cheap Rolls-Royce,” the saying goes.

But I can’t be bothered about that minor detail. Nothing is a fun to drive as an old Rolls-Royce. And Why can’t we have fun all the time?