It’s not that long ago that Matthew Corrin was everywhere as the face of a nascent healthy eating trend that was trying to shake Canadians out of their burgers-and-fries habits.

On Jan. 31, 2017, bells echoed through the Toronto Stock Exchange broadcast centre as green and white confetti rained down from the ceiling, marking the first trading day for Freshii (FRII:CT).

The Toronto-based eatery aimed to capitalize on an ambitious growth strategy to win over the hearts of avocado and quinoa-loving consumers, with the company planning to have between 810 and 840 locations worldwide by the end of fiscal 2019. But flash forward four years and the health-focused chain has achieved less than half of that target. 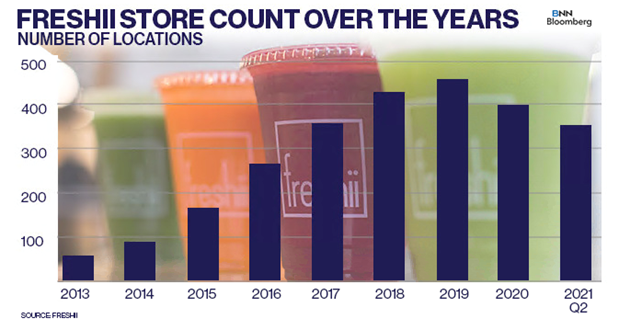 “Freshii came out of the gates pretty strong in terms of their positioning,” Robert Carter, a food industry consultant who’s been studying the space for more than 15 years and now acts as managing partner at The StratonHunter Group, said.

“It was almost like if you look at Subway years ago when they had their whole fresh customization move, it was a good market positioning.”

Corrin, the founder and chief executive officer of Freshii, raved at the time about the company’s goals for the next few years and its plans to become one of the most compelling growth stories in North America.

“When we were on the road over the last three weeks raising money, some shareholders said, ‘Why are you going so quickly?’ and others said, ‘Why aren’t you going fast enough?’ So it just depends on who you ask,” Corrin said in an interview.

But with the confetti long since swept away, so has Freshii’s significant expansion plans for brick-and-mortar restaurants.

A few months after going public, the credibility of Freshii’s management came into question after it warned that growth would be slower than expected. The company slashed its sales target and restaurant opening plans for 2017, which sent shares into a downward spiral.

As of the close of trading Thursday, Freshii was down approximately 82 per cent from the $11.50 IPO price. Indeed, Freshii hasn’t traded at or above that level since July 24, 2017.

BNN Bloomberg made multiple attempts in recent weeks to arrange an interview with Corrin for the purposes of the company’s most recent results and this story. Freshii did not respond to those requests.

Freshii is known for its healthy alternatives to the traditional fast-food menu. The company is best known for its salads and bowls, and while it was one of the first Canadian businesses to target health-conscious eaters at a large scale, the space has now exploded with competition across the country.

“I think this market is immensely competitive and will continue to get more competitive in the years to come,” Segal said.

“But at the end of the day, it’s about providing that experience and investing in technology so the customer can order when they want, however they want.”

Mad Radish currently has seven stores between Toronto and Ottawa, with an eighth scheduled to open in Kanata, Ont. in 2022.

In contrast to Freshii, it’s a private company so it doesn’t have to open its books for investors. Mad Radish did not respond to requests to provide financial details on its performance.

Despite competition in the clean-eating market, Freshii has had no problem grabbing investors’ (and the media’s) attention in unconventional ways in the past.

In 2015, Corrin wrote an open letter to the chief executive officer of McDonald’s Corp., urging the world’s best-known fast-food chain to look north. “Partner with us. Save the world, and help yourselves,” he wrote.

The open letter written by Freshii’s CEO went on to call out the Golden Arches’ growth and lack of healthy menu options.

“The reality is that McDonald's is stagnating and your growth days are over. You are struggling with declining same-store sales, offering franchisees inadequate leadership and fumbling through your menu rather than adding healthier options,” Corrin stated. 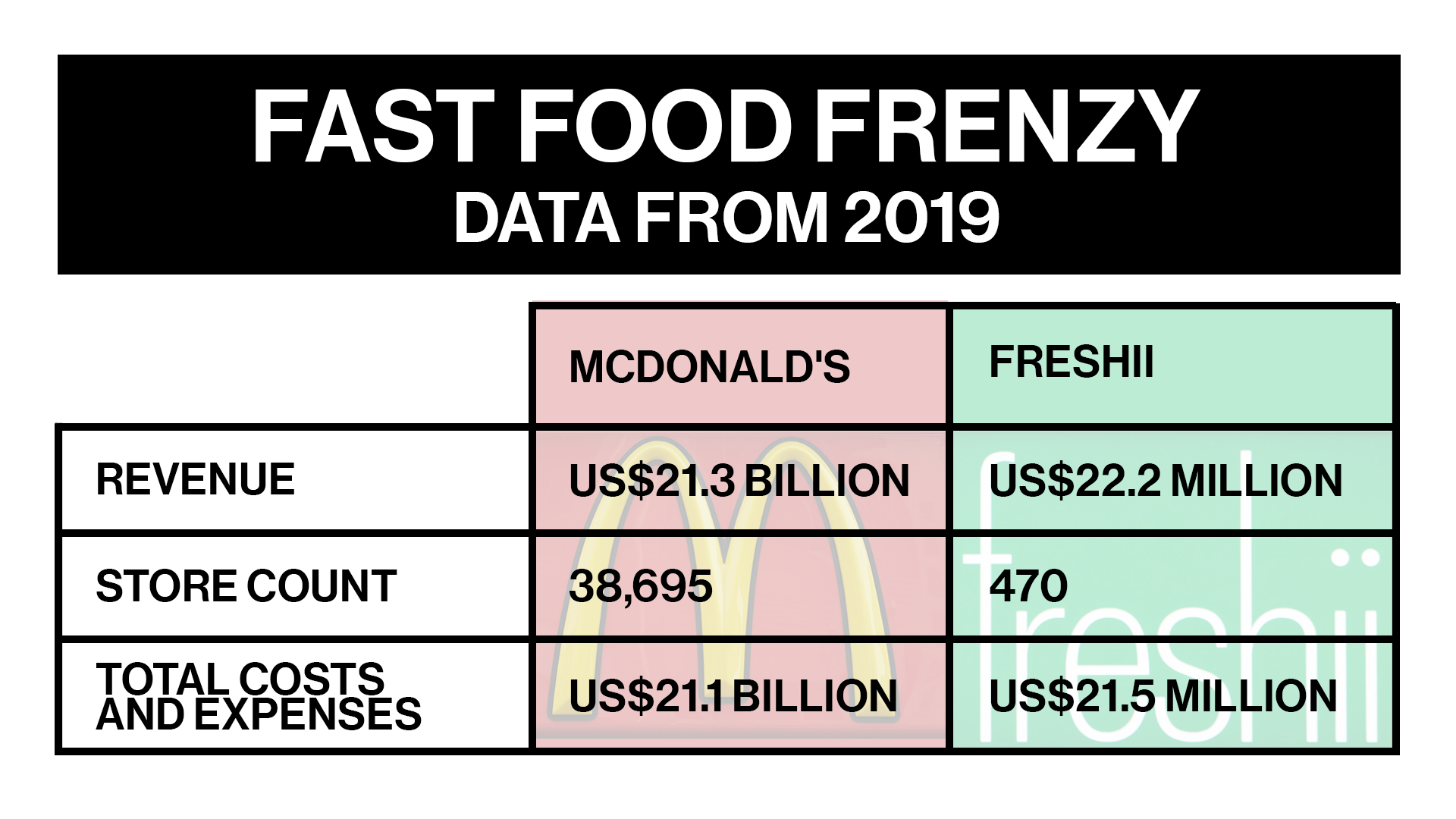 McDonald’s posted US$25.4 billion in revenue during 2015, flash forward to 2019 just before the pandemic and the company raked in US$21.3 billion that year.

In comparison, Freshii reported US$18.2 million in its first full-year as a public company during 2017. The healthy-eating chain then generated slightly more in fiscal 2019 with revenue coming in at US$22.2 million.

The outreach to McDonald’s served as the template for another media-savvy play by Freshii for a partnership.

It released an open letter to Subway on March 21, 2017 – again, proposing a tie-up with a dominant North American fast-food chain.

"Let's explore a partnership in which we together convert select Subway stores to Freshii restaurants in a quick, low-cost way," Corrin wrote in his “Dear Subway” letter published on Freshii’s website.

“It’s not a stunt, it’s real. It’s real ideas. It’s thoughtful. When you put something out there publicly you’ve got to be prepared to defend your position,” Corrin said in an interview at the time.

“Every open letter we’ve done over the years has had a very specific purpose and is done from the heart and not meant to be mean-spirited.”

Marketing expert John Yorke, CEO of Rain43 said he believes Freshii was serious about the merger and he thinks the company had good public relations tactics rather than a structured advertising stunt.

“Don't confuse a strategy with a stunt - Freshii has never shown me that they have any advertising or marketing strategy beyond PR tactics - which is sad for a company that seems to have a good foundation - however, they do not seem to have a clear purpose in the market…Freshii is just another Restaurant Brands in the marketplace, dwarfed by established brands that win by attracting a loyal mass,” Yorke wrote over email.

“I would have no idea if they were serious about the merger, I assume as there is truth in humour, there was truth in the suggestion, but probably no purpose.”

While the McDonald’s and Subway proposals never turned into deals, Freshii has managed to establish some partnerships over the years with the likes of Air Canada, Shell Canada Ltd. and Walmart Canada. Those arrangements are about getting Freshii products in front of consumers in more ways. But none of them are on par with the moon shots Corrin fired when he targeted Subway and McDonald’s.

“I think Freshii has been doing a good job at expanding those partnerships strategically and has focused more on getting the consumer package branding around their name,” Carter, the food industry consultant from The StratonHunter Group, said.

“I think overall long term, it’s a good strategy as it helps the company secure revenue from multiple channels.”

Carter said he has never worked with Freshii or on its behalf and has not received compensation from the company.

But despite any plaudits Freshii might be winning for trying new things, it’s falling on deaf ears in some corners of the market.

“It has been a disaster from a return respective, it’s just proof that headline growth stories, high-profile media coverage does not guarantee success,” John O'Connell, CEO of Davis Rea Ltd., said.

“I’ve never owned the stock and I wouldn’t touch it with a 10-foot poll. It’s a classic example of Canadian markets forcing IPOs out the door for companies that shouldn’t have been public in the first place and we’ve done a whole round of other ones since then.”

Despite that view from Bay Street, food industry expert Carter said there’s more to the business than just the share price.

“Freshii itself as a business model continues to be very viable and I think that the share price is underrepresented of the opportunity for the business given the market size, [Freshii’s] expansion and its reach.”

Carter adds that the effects of the pandemic aren’t going away any time soon and businesses need to make sure they continue to diversify in order to stand out in the highly-competitive health-orientated restaurant scene.

“In this day-and-age that’s been accelerated by COVID, the model of the restaurant industry has forever changed. Health and wellness was growing pre-pandemic, but it’s even more important now,” he says.

“If you’re a restaurant brand and you’re just focusing on your brick-and-mortar locations then that’s fine, that’s one business model, but I think it’s going to be more challenging than that. I think the bigger opportunity now is to build a brand which I think Freshii has done, same as Starbucks and Tim Hortons.”