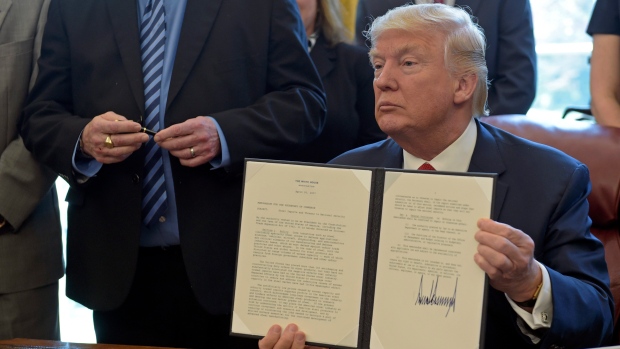 U.S. President Donald Trump took fresh aim at Canada on Thursday, but expanded his hit list to beyond dairy to include lumber and energy.

Signing his executive order to probe foreign threats to the U.S. steel industry, the president called his perceived trade imbalance with Canada as “a disgrace.”

However, unlike Tuesday’s comments in Wisconsin, Trump broadened his focus to include other Canadian commodities.

“That also includes what’s happening along our northern border states with Canada having to do with lumber and timber. The fact is NAFTA – whether it’s Mexico or Canada – is a disaster for our country.”

The president promised to redress NAFTA in short order as a result.

“It’s a trading disaster and we’ll be reporting back some time over the next two weeks about NAFTA and what we’re going to do about it. But, what happened to our dairy farmers in Wisconsin and New York State: We’re not going to let it happen. We can’t let Canada, or anybody else take advantage and do what they did to our workers and to our farmers.”

“I want to also just mention, included in there is lumber, timber and energy, so we’re going to have to get to the negotiating table with Canada very, very quickly.”

Renowned businessman Charles Bronfman, and co-author of ‘Distilled,’ told BNN that the United States won't doing anything to hurt Canada, because it's not in their best interest.