A diversified portfolio makes Namibia Critical Metals an investment vehicle you should not ignore - BNN Bloomberg
{{ currentBoardShortName }}
Markets
As of: {{timeStamp.date}}
{{timeStamp.time}} 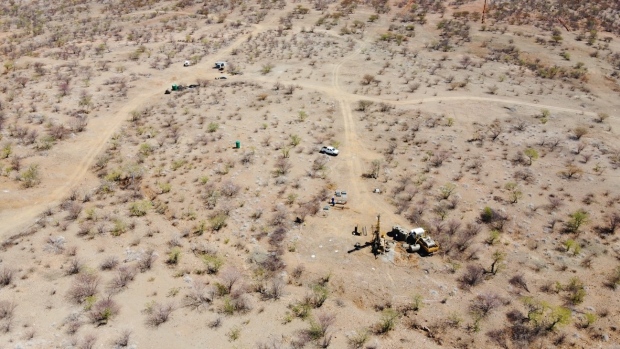 The key metals that Namibia Critical Metals (TSXV: NMI | OTCQ: NMREF | Frankfurt: 7NR) is focused on harken back to high school chemistry classes about the periodic table of elements.

Rare earth elements like dysprosium and terbium can be a mouthful, but they are key to the modern economy.

Those two heavy rare earth elements are crucial inputs for the permanent magnets that power so many applications these days, including the electric vehicle (EV) boom.

According to Adamas Intelligence, the permanent magnet sector is expected to be the fastest growing end-use category of rare earth elements in the next decade. And while some of the lighter (by atomic weight) rare earth elements are common, the heavier ones, including dysprosium and terbium, are rare.

Demand for permanent magnets and other rare earth applications has skyrocketed in recent years and, as a result, the global scramble to secure consistent supplies of these metals has accelerated.

With its suite of diversified critical metals projects in a mining-friendly African country, Namibia Critical Metals appears well-positioned to leverage these trends.

“Our resource update on Lofdal puts the project unequivocally among the top heavy rare earth element projects in the world. It’s a fantastic position to be in.”
— Darrin Campbell, President, Namibia Critical Metals

Why Namibia?
As a mining locale, Namibia is not necessarily top-of-mind among mining investors, but it is a very favorable jurisdiction.

Mining accounts for about 12.5 per cent of the country’s GDP and provides over 50 per cent of its foreign exchange earnings. The country has been a stable democracy since achieving independence in 1990 and boasts good roads and other infrastructure.

The country is also host to a variety of mines and mineral deposits under development. Namibia Critical Metals VP of Exploration, Dr. Rainer Ellmies, notes that the country has “an excellent database of geophysical and historical exploration data at the Geological Survey.” President, Darrin Campbell, adds, “Namibia is a great mining jurisdiction. It’s very socially and politically stable and very mining friendly, with great infrastructure and a strong rule of law.”

Namibia Critical Metals also has deep ties in the country—it is one of the largest exploration companies operating in Namibia.

The crown jewel of the company’s assets in Namibia is its Lofdal heavy rare earth element (HREE) project.

A recent 14,500 m drilling program on that project allowed the company to report an updated resource estimate in May that showed impressive growth. This included a 1,451 per cent increase in Lofdal’s measured and indicated resource tonnage compared to a resource estimate used in a 2014 preliminary economic assessment for the project.

PRESS RELEASE - We are pleased to announce an updated NI 43-101 mineral resource estimate for our Lofdal Heavy Rare Earths Project.

Results show a more than 650% increase in measured and indicated TREO mineral resources.

The resource’s amount of contained, measured, and indicated dysprosium oxide and terbium oxide increased by 6.1 times and 6.7 times respectively. The work also resulted in a 164 per cent increase in inferred resource tonnage.

The in-situ Mineral Resource estimate was independently prepared by The MSA Group of South Africa and was based on geochemical analyses and density measurements of core samples obtained by diamond drilling undertaken by Namibia Critical Metals from 2010 to 2012, 2015 and more recently in 2020.

Dr. Ellmies attributes the tonnage increases to the fact that Namibia Critical Metals “invested a lot in detailed geological mapping and structural analysis, and thus cracked the code of the mineralization at Lofdal. The drilling was spot on.” Because of this new model, Dr. Ellmies and team were able to efficiently extend the known resource on the project.

Campbell comments, “this was an unbelievably successful drill campaign, and it took place in the first year of our joint venture with JOGMEC. We think this is the tip of the iceberg—there’s potential for district-scale mineralisation at Lofdal.”

JOGMEC is an acronym for the Japan Oil, Gas and Metals National Corporation, a Japanese agency with a multi-billion dollar annual budget and a mandate to secure the resources the country needs to drive its economy.

JOGMEC has made investments all over the world, including a joint venture with Australian REE company, Lynas, to the tune of US$250 million. Last year, it cut a JV deal with Namibia Critical Metals on Lofdal.

Under the deal, JOGMEC agreed to a three-term structure that will see the agency invest $3 million in Term 1 and $7 million in Term 2 to take a 40 per cent interest in Lofdal. It can then spend another $10 million to take that interest to 50 per cent and a final $5 million cash payment for 1 per cent bringing them to 51 per cent.

JOGMEC recently made an early decision to move to Term 2 of the Lofdal deal and to contribute another $2-million-plus to the project’s budget through July 2021, a clear sign the agency likes what they are seeing.

With the resources and support that JOGMEC provides, it is hard to overstate the value of this partnership. Comparing it to the gold sector, Campbell says, “it is like being an aspiring gold producer and having the resources of gold-mining major Barrick to take it through to production.”

The company’s Grootfontein project is located in a gold belt with two operating gold mines that have combined resources of more than six million ounces of gold. Grootfontein lies within 80 km of one of those mines, B2Gold’s Otjikoto gold mine.

The Grootfontein project covers ground that is underexplored for orogenic gold, as well as for copper-nickel-platinum group element mineralisation. Recent geochemical work on the project has outlined a large-scale anomaly that spans 10 km by 10 km. In addition, drone-borne magnetic surveys and ground-based geophysical work of this area have identified several targets earmarked for follow-up by drilling in Q3 2021.

The rest of 2021 will include more target identification work on this project and on the nearby Otjiwarongo and Erongo projects.

In addition to heavy REEs and gold, Namibia Critical Metals is pursuing a wide array of critical metals in the country including copper, cobalt, tantalum and niobium.

For now, though, the focus will clearly be on leveraging that JV with JOGMEC to advance Lofdal toward production. Campbell is very enthused about this project’s potential, saying, “our resource update on Lofdal puts the project unequivocally among the top-heavy rare-earth element projects in the world. It’s a fantastic position to be in.”

With a pipeline of projects that varies in development stage from greenfields to mine development, Namibia Critical Metals has also a professional team in place with the in-country experience to both advance Lofdal and its gold projects and to look for new projects to develop in the country as well.

The rise in demand for this company’s “critical metals” sets it up as a great investment vehicle to leverage key trends in the modern economy.