While their stock-market obituaries have been retracted before, U.S. tech megacaps have the most to lose should the Federal Reserve make good on its pledge to revoke stimulus. Their demise would be welcome news to many investment managers.

Spiking Treasury yields sent the richly valued Faang group to a third week of losses. While it’s too early to draw definite conclusions from Jerome Powell’s tapering pledge, it’s a scenario that firms like PanAgora Asset Management see playing out with increasing force as pandemic-era programs to bolster the economy are lifted.

The quant shop says an easing of market extremes will power discretionary trades ahead, thanks to the tech megacaps gobbling up fewer gains in stock benchmarks as interest rates finally tick up. In their view, the era of narrow stock leadership -- powered by the explosive growth in passive funds -- is beginning to unwind. And less-aggressive monetary easing ahead will expand the number of market winners. 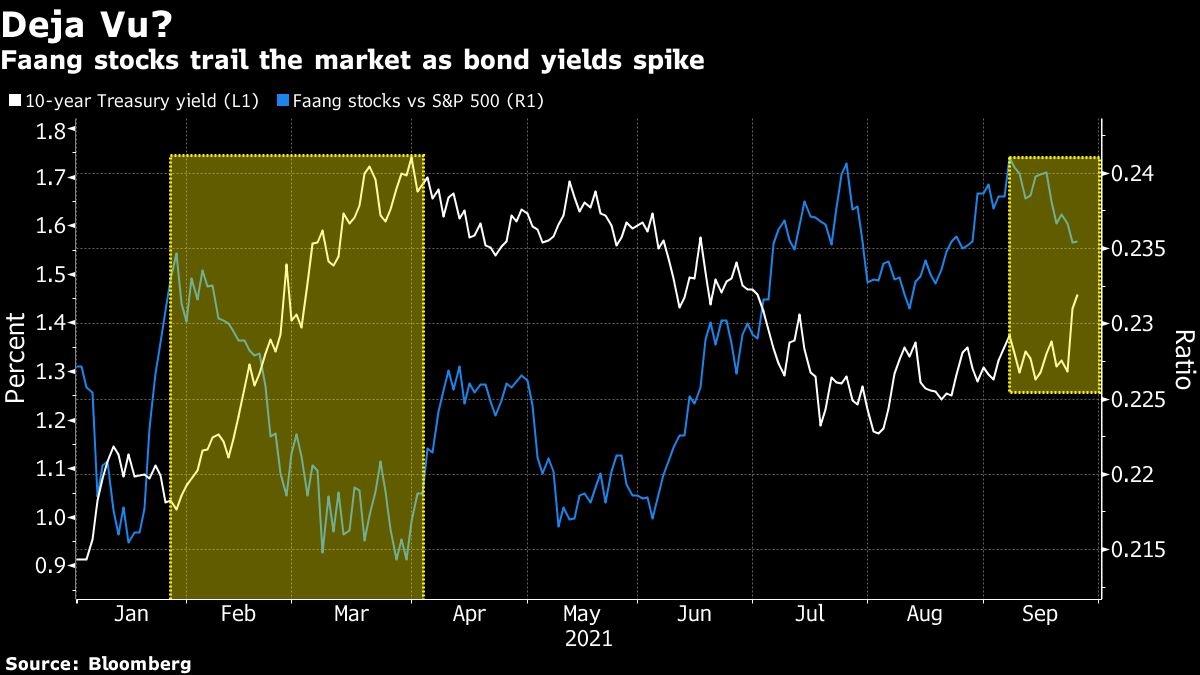 “The last episode like this lasted 10 years and generated value-added opportunities for myriad active strategies,” a PanAgora team led by Chief Executive Officer Eric Sorensen wrote in a recent research note. “Given the current trend of a fall-off in concentration, which could last for years due to less aggressive monetary liquidity and rising long rates, current moves into passive may be ill-timed.”

The stock-picking faithful need to look no further than earlier this year, when a jump in bond yields rattled the tech megacaps, helping drive mutual funds to their best start of a year in almost a decade.

Stocks tumbled to start the week only to bounce back as angst over the troubled China Evergrande Group and the Fed’s policy eased. Both the S&P 500 and the Dow Jones Industrial Average climbed more than 0.5 per cent over five days, snapping a string of at least two weeks of declines. The so-called Faang bloc - Facebook Inc., Apple Inc., Amazon.com Inc., Microsoft Corp. and Google parent Alphabet Inc. -- fared worse, losing 0.3 per cent.

As the Faang shares loosen their grip on the market, stock pickers are starting to shine. About 46 per cent of active funds beat their benchmarks this year through August, well above the average annual hit rate of 36 per cent, data compiled by Bank of America Corp. show.

“You’re already set up for a better environment for the average stock. The Fed pulling back stimulus probably adds to that,” Keith Lerner, co-chief investment officer at Truist Advisory Services, said by phone. “It makes sense that this broadens out. If it doesn’t, then to me that means our underlying thesis may be wrong as far as what we’re thinking about growth.”

PanAgora argues that cycles of stock concentration have been a key determinant in the relative performance of active money managers. It compared a cap-weighted indexing approach to non-cap weighted alternatives, and showed how they fared through those cycles.

The upshot: A cap-weighted strategy thrives as concentration rises, but delivers “significantly” lower returns when the macro climate shifts in favor of higher rates.

It’s the latest salvo in the active-passive debate as money managers pour billions into exchange-traded funds on the conviction that the decade-long losing streak for stock pickers is far from over.

PanAgora, known for its alternative investing approaches, has a dog in this fight. The firm helped popularize risk parity, which allocates across assets to maintain a targeted level of volatility. It also trades in factor allocations that dissect stocks by characteristics like their relative cheapness or how volatile they are.

The systematic player is far from the first firm to call an end to the long-standing travails afflicting stock pickers, but evidence so far is mixed. While a massive exodus that has plagued the world of active investing in the past decade is showing signs of waning, with outflows on pace for the slowest year since 2014, passive investing still dominates inflows, data compiled by BofA show. 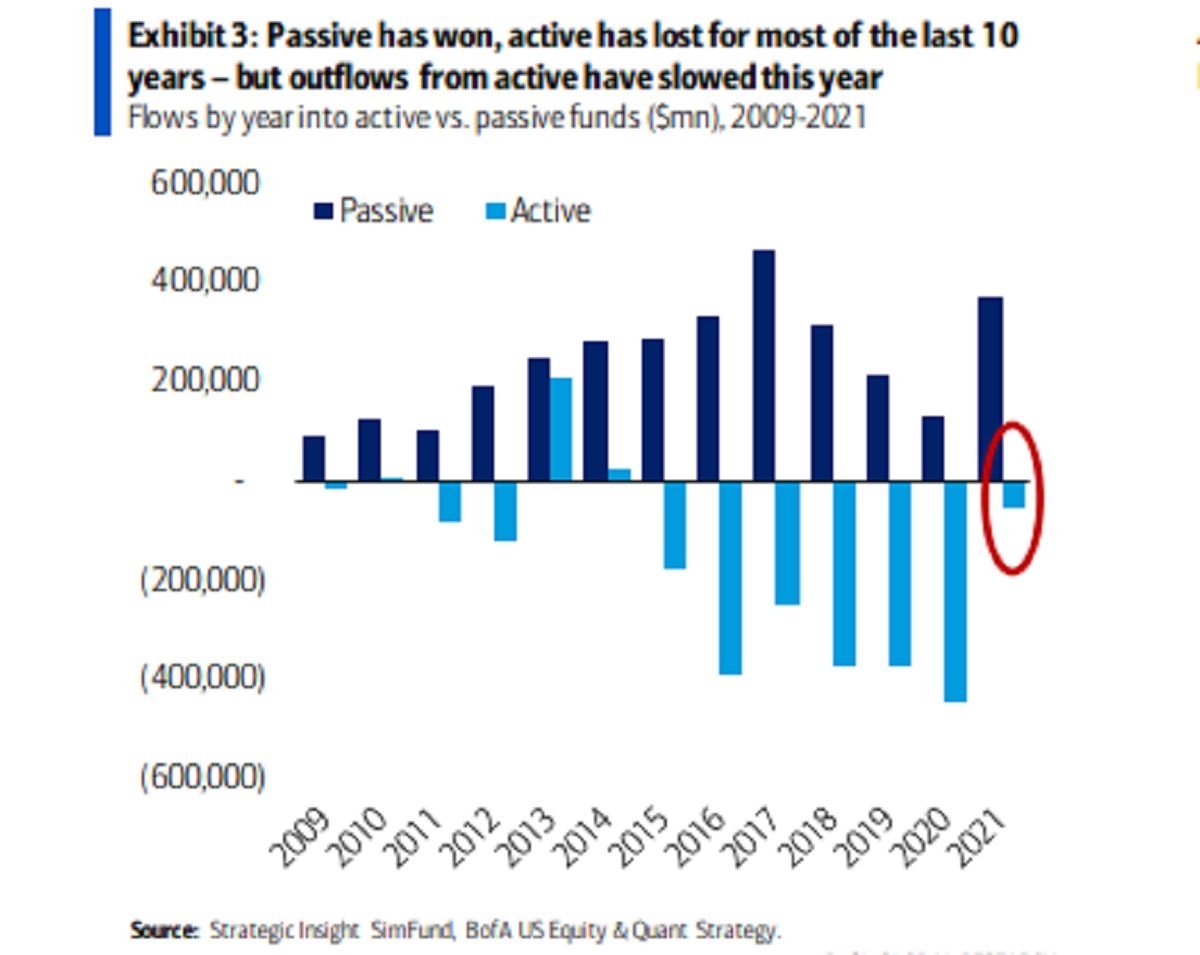 But appetite for stock picking is surfacing, at least going by BofA client flows. Last week, when the S&P 500 slipped, the firm’s clients, including wealthy individuals, pensions and hedge funds, collectively added money to single stocks while pulling out of passive vehicles like ETFs.

The removal of policy support would mean “it becomes more about the fundamentals of individual companies rather than just the big stimulus that’s hitting the entire economy,” said Michael Reynolds, vice president of investment strategy at Glenmede. “In such an environment, you could expect a return to thinking about the fundamentals on these companies and whether they have a longer-term growth trajectory that makes sense.”