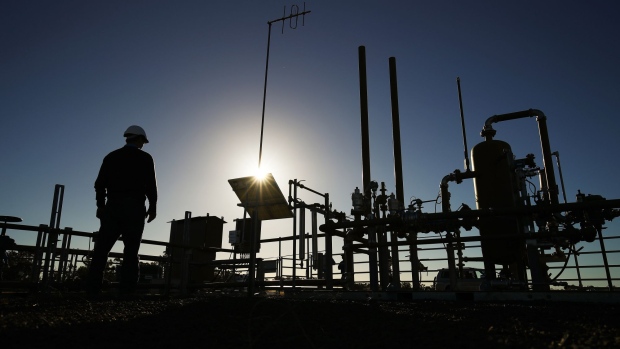 A Santos pilot well operates on a farm property in Narrabri. , Bloomberg

(Bloomberg) -- Santos Ltd. won approval to proceed with a major natural gas project in Australia, securing a long-term role for fossil fuels even as their part in the global transition to cleaner energy is questioned.

The decision to give the go-ahead to the A$3.6 billion ($2.6 billion) coal-seam gas project in Narrabri follows a decade-long struggle with environmentalists and regulators. As both a major exporter of energy and a victim of the devastation caused by a warming planet, Australia is in the vanguard of countries weighing the economic benefits of gas against environmental damage.

“The Commission concludes the project is in the public interest and that any negative impacts can be effectively mitigated with strict conditions,” the three-person New South Wales Independent Planning Commission said in a statement. The consent is subject to 134 conditions, covering issues from water management to a requirement around greenhouse gas emission offsets.

Narrabri, about 500 kilometers (311 miles) northwest of Sydney, has the potential to supply about half the energy needs of New South Wales, the country’s most populous state, according to Santos, and the producer argues it’s an important stepping stone in the country’s transition away from coal-fired power. The project’s opponents said the energy switch could come without major new fossil fuel developments, with giant wind and solar farms, backed by battery storage and some gas-fired generation, more than capable of filling the gap.

The company’s shares fell as much as 3% in Sydney.

After winning the state-level approval, the Santos project will also require separate authorization from the national government. The country’s pro-fossil fuels government earlier in September outlined its plans for a “gas-fired” economic recovery from the coronavirus-induced recession, including incentives to develop new gas resources.

Citigroup expects “expedited” federal ministerial approval of the project within one to two months, with a final investment decision in early 2022 and production beginning in the first half of 2024, the bank said in a research note dated Sept. 25.

Advocates including the Australian Petroleum Production & Exploration Association, an industry group, insist the development will help drive down energy prices that rank among the world’s highest. A number of aging coal plants are scheduled to retire in Australia over the next decade, and the country’s east coast faces a potential gas shortfall in the years ahead as the domestic market competes for supply with three large liquefied natural gas export facilities in Queensland.

The Santos project -- with a potential life span of 20 to 25 years -- has faced a wide range of opponents, from farmers and ecologists to activist grandmothers. A consultation process received more than 23,000 public objections and about 11,000 written submissions, a sign of the depth of community feeling and a reflection of rising pressure on energy producers over their greenhouse gas emissions.

“The project’s contribution to global heating should have seen this bitterly contested proposal plainly rejected,” Greenpeace Australia Pacific spokesperson Jonathan Moylan said in a statement. “Extracting and burning methane has already made a massive contribution to the climate crisis and turning Narrabri into a gas field would only exacerbate extreme weather events like bushfires.”

Regional farmers have expressed concern the project could harm vast aquifers used to supply water for livestock and crop irrigation in the area. There have also been questions over the disposal of hundreds of thousands of tons of salt the project will produce.

The commission’s assessment process had addressed all relevant issues around environmental and water impacts, Santos said in its statement.

The Narrabri decision follows a separate authorization Tuesday that will allow construction of a new A$1 billion metallurgical coal mine with a potential 80-year lifespan in central Queensland, a project that’s also been a focus of criticism from environmentalists.