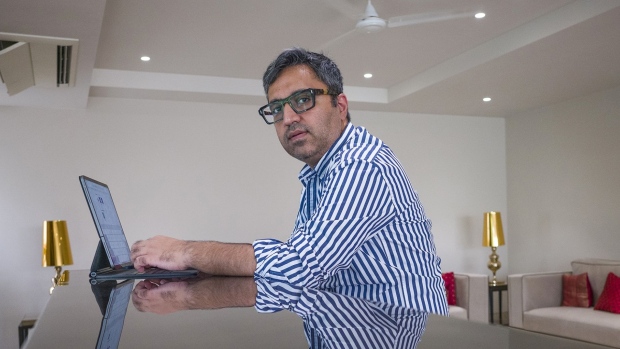 (Bloomberg) -- The co-founder of fintech unicorn BharatPe will go on a two-month leave of absence, a remarkable turn of events for an outspoken 39-year-old who several Indian media outlets in recent weeks had alleged having made an abusive phone call to a bank employee.

Ashneer Grover, also managing director of the Sequoia Capital and Tiger Global Management-backed startup, informed the board of his decision to take a voluntary hiatus till the end of March, according to a statement from BharatPe Wednesday. The co-founder remains committed to the company, BharatPe added without explaining the reason for the decision.

The surprise announcement came days after an audio clip surfaced on social media of a man making abusive statements over a telephone call with a bank employee. The person, which local media including the Mint newspaper reported was Grover, appeared to be upbraiding a staffer at Kotak Mahindra Bank for refusing him financing to buy shares in beauty retailer Nykaa’s IPO, one of the more hotly anticipated tech debuts of past months. The co-founder later tweeted that the audio clip was a “fake recording from a scammer attempting to extort money.” The tweet was deleted soon after.

Grover sent Kotak a legal notice regarding failure to provide the financing, BloombergQuint reported Jan. 9, citing a copy of the notice. On Jan. 10 the Mint newspaper reported that Kotak, through its lawyers, accused Grover of threatening Kotak employees’ lives and that Grover denied the allegations.

In a subsequent statement, Kotak acknowledged the legal notice from Grover and said it objected to his “inappropriate language.” Grover and BharatPe didn’t reply to a Bloomberg News email seeking comment Wednesday.

Last year, Grover publicly attacked fellow unicorn Paytm’s IPO, calling it over-priced -- breaking an unspoken code among entrepreneurs who rarely criticize their peers publicly. He was called out on social media for being derogatory on the newly created Indian version of Shark Tank after he upbraided startup hopefuls.

Grover is an alum of the famed Indian Institute of Technology along with peers like Zomato founder Deepinder Goyal and the creators of online retailer Flipkart, Sachin Bansal and Binny Bansal. He worked in investment banking and joined the mergers and acquisitions team of American Express before a brief stint at  SoftBank-backed online grocer Blinkit (formerly Grofers).

Grover and his fellow founders started BharatPe in 2018, conceiving it as an app that would help small merchants accept digital payments without charge through QR codes. It grew rapidly and by the end of summer 2021, had hit 140 million monthly payment transactions and expanded into lending, Grover told Bloomberg News. It racked up an array of high-profile investors including Coatue and Dragoneer, and was last valued at nearly $3 billion.

“The board has accepted Ashneer’s decision, which we agree is in the best interests of the company, our employees and investors and millions of merchants we support each day,” the company said in its brief statement.