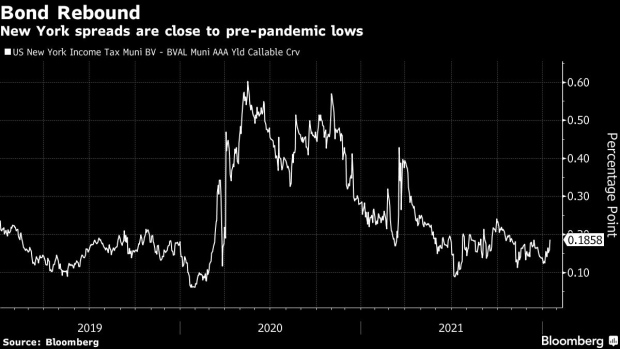 (Bloomberg) -- Thanks to a gusher of federal pandemic aid, a booming Wall Street and a tax increase on millionaires, New York is projecting balanced budgets for the next five years, the first time ever that the Empire State has published a financial plan without a deficit.

Flush with cash, Governor Kathy Hochul on Tuesday proposed a $216.3 billion budget for the fiscal year beginning April 1 that calls for billions of dollars of one-time spending on property-tax cuts, pandemic relief and bonuses for health-care workers. At the same time, the Democrat, who’s seeking election to her first full term in November, proposed boosting budget reserves by almost $10 billion over three years, bringing the state’s rainy-day funds to 15% of spending.

“It’s an unprecedented situation,” said Thea Okin, a municipal credit analyst at Western Asset Management. “We have balanced budgets as far as the eye can see, and having the additional means to address health-care, affordable housing and the environment is a positive that will only make the state more attractive.”

Buoyed by record low interest rates and the economic support from Washington, Wall Street, New York’s cash machine, is booming. Securities-industry profits soared to about $45 billion through the third quarter of 2021, after the best first half since 2009. Wall Street accounts for roughly one in every five state tax dollars, and the sector’s strength helped Hochul raise the estimate of tax receipts by an average of about $5 billion annually since the last projection in October.

Hochul’s budget proposal “suggests constructive near-term trading in state, NYC, and local government bonds,” according to Municipal Market Analytics. “Numbers like these suggest that local aid in NYS should increase not decrease, implying a particularly good environment for hypothetical local credits facing their own economic or financial challenges in 2022-2024.”

The gap between the yields on New York’s 10-year personal-income tax bonds, which make up the bulk of the state’s debt, and top-rated municipal securities is about 0.19 percentage point. This key measure of perceived risk is right around the level from the end of 2019.

To be sure, while Wall Street is thriving, Main Street’s pandemic recovery is sluggish. As of November, the state’s unemployment rate was 6.6%, compared with the national rate of 4.2%. Lower-paying leisure and hospitality jobs have been the slowest to return.

And remote work could reduce demand for commercial real estate in New York City and cripple the stores and restaurants that rely on office workers. Even more worrying, New York’s population has declined by 319,000, according to the U.S. Census Bureau’s 2021 population estimates, the largest drop among the 50 states.

Hochul’s proposals included an additional $2 billion in pandemic-recovery measures, $1 billion for infrastructure, $1.2 billion in bonuses for health-care workers and a $25 billion, five-year housing plan. The governor needs to reach a budget agreement with lawmakers by March 31. Legislative Democrats, who hold a super-majority in both state chambers, could be amenable to tax cuts and other programs that curry voter favor ahead of the elections.

New York’s economic competitiveness and recovery would be better served by restraining recurring spending and rolling back last year’s tax increases that made New York’s combined business and top personal income-tax rates the highest in the U.S., said Citizens Budget Commission President Andrew Rein in a news release. The CBC is a business-backed budget watchdog group.

“As strong as the receipts and federal aid are, this year’s budget negotiations risk a feeding frenzy that could destabilize the state’s future finances,” Rein said.

New York’s progressive income-tax structure and its reliance on a volatile financial-services sector means that a Wall Street downturn could widen budget gaps. A state simulation of prior recessions resulted in tax-receipt losses of $36 billion to $50 billion over a three-year period.

New York plans on increasing its reserves to $19.4 billion by the fiscal year beginning April 1, 2024. The state should raise them by an additional $2.5 billion, the CBC said.