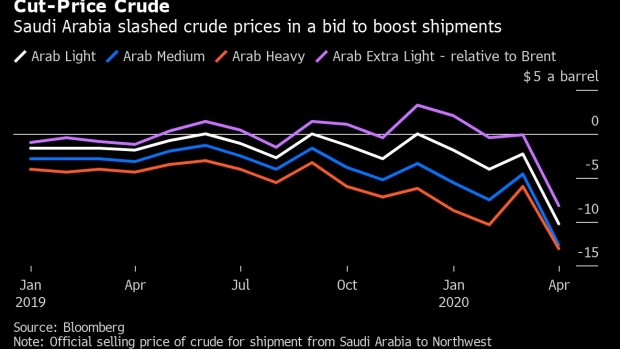 (Bloomberg) -- Saudi Arabia is unleashing a wave of crude toward Europe, traditionally the backyard for Russian oil sales, pledging to supply regional refineries with as much as triple their usual intake from the kingdom.

The Saudi shipments, coupled with unprecedented discounts, are turning the European oil market into the most bitterly fought corner of an increasingly acrimonious oil price battle between Riyadh and Moscow. Saudi Arabia is offering its flagship Arab Light crude into Rotterdam for roughly $25 a barrel, a massive discount to the price of Russia’s Urals.

European refiners including Royal Dutch Shell Plc, BP Plc, Total SA, OMV AG, Repsol SA and Cepsa SA have all received crude allocations from state-owned Saudi Aramco significantly above their normal levels, according to people familiar with their operations. The range of extra supplies was between 25% and 200%, depending of the company, the same people said.

The Saudi discounts are so big that Arab Light will “push out” Urals and other crude streams “from regional refiners’ diet” unless their relative price also falls, Amrita Sen, chief oil analyst at consultant Energy Aspects Ltd. said in a note to clients.

The increase in volumes, known in the industry as nominations, was confirmed by Aramco to the European oil companies on Wednesday, the same people said, asking not to be named discussing private information.

Saudi Aramco announced on Tuesday that it was lifting production to 12.3 million barrels a day for April, just days after enticing refiners to buy more with record cuts to its official selling prices -- the discounts or premiums at which the kingdom sells relative to regional benchmarks.

The supply hike -- more than 25% higher than last month’s production -- put Aramco above its maximum sustainable capacity, indicating that the kingdom is even tapping its strategic inventories to dump as much crude on the market as quickly as possible.

Aramco hasn’t disclosed the regional split of the output increase, but the volumes European refiners have been told to expect indicate the region is a central part of Saudi Arabia’s exports boost. Traditionally, Aramco sells a small share of its crude to the continent, with the bulk of sales going to Asia. Aramco shipped just 10% of its crude to Europe in 2018, the latest year where full data are available, according to the U.S Energy Information Administration,

Over the weekend, Aramco cut its official selling prices by the biggest amount in more than three decades. The company made its biggest cuts for buyers in northwest Europe. An $8 a barrel reduction in most grades amounts to a direct challenge to Russia, which sells a large chunk of its flagship Urals crude in the same region. Aramco will sell Arab Light at an unprecedented $10.25 a barrel discount to Brent in Europe.

Discounts for Russian crude immediately ballooned. Vitol Group and Trafigura Group Ltd. failed to find buyers on Monday when they offered to sell Urals crude at the deepest discounts to a regional benchmark in almost two months.

“The latest Saudi OSPs had a strong hint of having been set with a political rather than technical strategy in mind,” said JBC Energy GmbH, a consultant based in Vienna.

To contact the editors responsible for this story: Will Kennedy at wkennedy3@bloomberg.net, Alaric Nightingale, Rachel Graham