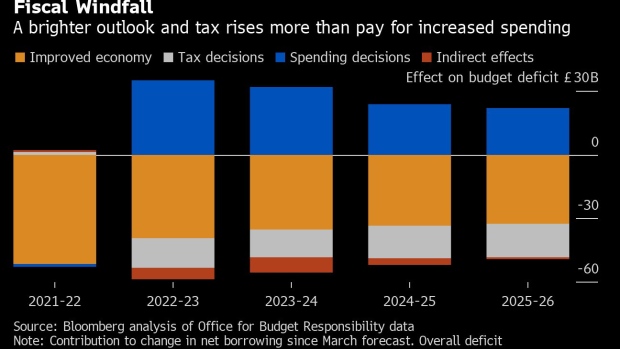 Charlie Bean, who stepped down from the Office for Budget Responsibility at the end of last year and served as BOE deputy governor for monetary policy between 2008 and 2014, said too much attention is paid to BOE decisions, which he described as “diddly squat” against the huge forecast implications made by the OBR.

At the October budget, the OBR gifted Chancellor of the Exchequer Rishi Sunak an average of 38 billion pounds ($51 billion) a year, equivalent to more than 1.5% of GDP, simply by upgrading its growth outlook. By comparison, a 1 percentage-point increase in interest rates reduces his spending power by 0.8% of GDP, the OBR estimates.

Financial markets, academics and the media are transfixed by rate decisions but those are “quibbling” when set against the billions of pounds of spending power that the OBR can give or take away from the chancellor.

“Too many people focus on monetary policy. Not enough think about fiscal policy. Much more attention should be paid to fiscal policy,” Bean, who ran the OBR’s macroeconomic forecast, told Bloomberg News. “The world that we’re in is one that has made fiscal policy the right weapon to be focusing on.”

He added: “Far and away the most important judgments I have made as a policy maker are taking a view at the OBR of what impact Brexit or the pandemic would have on potential output, or would the productivity slowdown be permanent or transitory. Those swamp, frankly, the diddly squat stuff they are doing in Threadneedle Street.”

The OBR, which is independent of government, could come to the rescue again when it issues new forecast in March. Economists are predicting a further upgrade to the outlook, which could deliver enough money for Sunak to protect households from a sharp rise in energy bills in April and still cut taxes before the next general election.

In December the BOE raised the benchmark rate from near zero to 0.25%, and is expected to increase it again to 0.5% in February. Bean said the central bank should have raised rates earlier, in “early autumn” when it became clear that the U.K. labor market was tight, but the delay of “a month or two was not a big issue.”

Twelve years after the independent OBR was set up, he thinks it is time for a review. His biggest concern is over what he called “silly gameplay” of the forecasts by the Treasury to make tax and spending decisions.

“What they do is look at the central OBR projection and say we’ve got whatever billions to play with and then spend that exactly,” he said. “The consequence is that when we change our forecast by even a modest amount that translates one-for-one into what the government thinks it can spend. It troubles me that policy is made that way. Anybody involved in forecasts know they are subject to tremendous uncertainty.”

Rather than strict rules targetting levels of debt and deficits, he said a system of “fiscal principles” may be better, where the government must always be building resilient public finances in “normal times,” bar exceptional circumstances.

“In good times you want debt to GDP to be coming gradually down so you’re building up space so that when there’s a bad shock –- a war, pandemic, financial crisis,” Bean said. The U.K. may need a separate agency, possibly the OBR, to decide whether times are normal, he added.

He cited Germany as an example, where the fiscal objective is always to keep the structural budget deficit below 0.5% of GDP and to target a 60% debt-to-GDP ratio unless the override is triggered, as it was in the pandemic. The U.K fiscal mandate is to have debt falling as a share of GDP in the third year of the forecast, which means the chancellor never actually has to meet the rule.

With the U.K. national debt at close to 100% of GDP and the cost of the climate transition and an ageing population still to come, difficult decisions will need to be taken on tax and spending. “Normal times are going to be stressful times,” Bean warned.