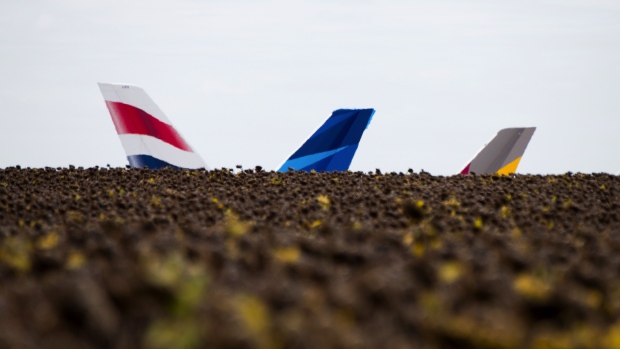 (Bloomberg) -- France’s Chateauroux airport, about 250 kilometers south of Paris, has built up a steady business over the years as a hub for freight aircraft and center to train pilots, helped by its clear weather and few foggy days.

Yet in recent months, the former NATO military base has been generating revenue from a different source: The parking of jets grounded by the Covid-19 pandemic.

The single-runway airport located in France’s flat, central basin has even turned away airlines seeking to store more planes -- a sign the global aviation slump is deeply set despite some easing of travel restrictions.

With the arrival of eight additional aircraft during the past week alone, Chateauroux is at close to full capacity, according to the hub’s director, Didier Lefresne. As many as 50 jets are now stored on its parking spaces and two newly-dedicated taxiways, with manufacturer Airbus SE and IAG SA’s British Airways among the biggest customers.

Chateauroux’s windfall mirrors the decline of the wider industry, which has been plunged into crisis by the impact of the coronavirus. Airlines have been forced to ground aircraft worldwide after demand from passengers slumped, with border closures and quarantine measures hampering traffic between key markets such as Europe and the U.S. One third of the global plane fleet remains in storage, according to aviation database Cirium.

“From a financial standpoint, it’s a good thing for Chateauroux,” Lefresne said in an interview. “At the same time, it’s very sad and reflects the dramatic situation unfolding in the industry.”

At the height of European lockdown measures earlier this year, Paris airports operator ADP was storing some 350 grounded jets. Air France-KLM still has 90 stowed at Paris-Charles de Gaulle, according to a spokesman for ADP, which has waived storage fees for carriers based at the airports. Orly, just south of Paris, has been nearly emptied of immobilized planes.

In the U.S., the three largest carriers — American Airlines Group Inc., Delta Air Lines Inc. and United Airlines Holdings Inc. — have parked about 864 jets around the country due to the pandemic, not counting all the Boeing Co. 737 Max planes already grounded following two fatal crashes in Indonesia and Ethiopia.

In other parts of the world, airlines have had to look far afield for storage. Indonesia, Vietnam, Malaysia and India ordered thousands of new jets as an emerging middle class flew for the first time, but inadequate infrastructure means some idle planes need to be parked as far away as near Alice Springs in Australia.

Qatar Airways is among carriers to have contacted Chateauroux in recent weeks and been left disappointed, according to Lefresne. The Gulf carrier was looking to stash 30 planes in Chateauroux for at least a year and as many as 50 in France as a whole, he said. The airline said it has no plans to park any of its fleet outside of Qatar.

The biggest lessor of space at Chateauroux is Airbus, which is storing some 23 planes that can’t yet be delivered to customers. The Toulouse-based manufacturer had around 145 aircraft in storage at the end of June.  British Airways has parked 10 at the hub until at least Oct. 1, including its fleet of A380 superjumbos, while regional carriers such as Air Caraibes and Air Madagascar are also customers. The airport’s listed monthly storage rates are between 3,000 euros ($3,548) and 5,000 euros a plane, not including the cost of maintenance. Airbus and BA fly in their own mechanics.

Chateauroux is picking up spillover from specialized jet storage and dismantlers like Tarmac Aerosave, which had more than 200 planes parked mid-June at its four sites in France and Spain. Meanwhile, the airport has maintained its freight and pilot-training operations — including for Air France and the French military.

“It’s hard to say how long this situation will last,” Lefresne said. “People aren’t flying now because they are scared.”