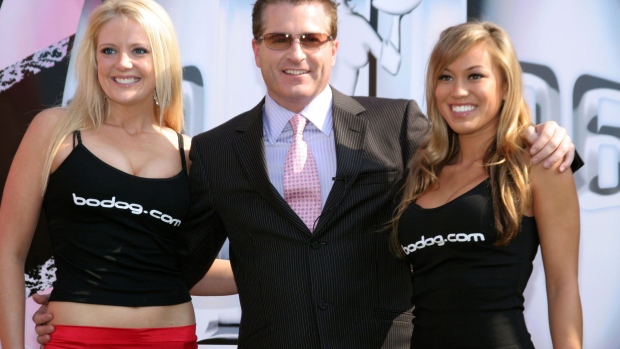 (Bloomberg) -- In May last year, dozens of guests gathered at a cabaret club in London’s Soho district to celebrate the birthday of Calvin Ayre, an online gambling tycoon-turned-crypto evangelist.

Friends of the Canadian entrepreneur partied late into the night, sipping champagne and mingling with dancers. Among them was Craig Wright, an eccentric Australian computer scientist who claims to have invented Bitcoin and who has for years worked alongside Ayre to promote various crypto ventures.

Later that month, the men had further reason for cheer when BSV Claims Limited, a company funded by Ayre, was incorporated at an address in the East End of London.

Ayre’s name, however, was nowhere to be found on the official documentation. Nor has his involvement with the company been previously reported.

Instead, the business listed two directors: Robert Buckland MP, the former Lord Chancellor and justice secretary, and Lord David Currie, a grandee of UK regulation and the inaugural chair of the Competition Markets Authority. Lord Andrew Tyrie, an ex-Conservative lawmaker, was appointed to the company’s advisory board.

The company’s purpose was to bring a £9.9-billion, 243,000-person class-action lawsuit to recoup investor losses in Bitcoin Satoshi Vision, a cryptocurrency heavily endorsed by Wright and backed by Ayre. Which is exactly what happened a few months later, when BSV Claims waded into the messy world of crypto regulation by filing suit against four of the biggest cryptocurrency exchanges.

The case pits the august group of UK lawmakers, financed by an Antigua-based company owned by Ayre, against some of crypto’s most powerful players. It accuses the exchanges — including the world’s largest, Binance — of causing investor losses when they removed Wright’s digital coin from their marketplaces three years earlier.

Not long after the boom days of crypto brought together unlikely casts of characters looking to seize on the gains, class-action lawsuits over large losses now offer their own alliances of establishment figures with colorful digital currency entrepreneurs. It also has prompted some to raise questions about the judgment of politicians willing to join the payroll of an opaque offshore entity financed by a figure who has had run-ins with authorities in the US and Canada.

“You have these incredibly senior, notionally trustworthy members of the financial establishment,” said Jolyon Maugham, executive director and founder of the Good Law Project, an organization that promotes transparency among UK lawmakers. “And in effect, what they are all saying is it’s totally fine to act for whoever they like as long as the real actions are disguised by an Antiguan entity.”

The politicians involved say they want to shield consumers and bring order to a loosely regulated industry. “People need to know what they are getting into,” Buckland said in response to a Bloomberg News question about the suit. “They need the protection of the rule of law.”

Wright first publicly claimed to be Satoshi Nakamoto, the pseudonymous inventor of Bitcoin, in 2016, offering resolution to a mystery that had long hung over the crypto community. Addressing skeptics in a BBC interview that year, Wright promised that proof of his supposed identity was on the way. Since then, however, he has failed to deliver the evidence needed to silence his critics – or to satisfy judges, who have largely not found his claims to be Satoshi credible.

Wright and Ayre teamed up the previous year after they were introduced by a mutual connection. The son of a pig farmer, Ayre had earned a two-decade ban from the Vancouver Stock Exchange for alleged insider trading, and went on to found Bodog, an online gambling platform that reportedly made him a billionaire.

Online gambling was largely illegal in the US during Bodog’s ascent, and in 2012, the US government charged Ayre with running an illegal sports gambling business and conspiring to commit money laundering. He eventually pleaded guilty to a misdemeanor charge and was sentenced to one year of unsupervised probation and a $500,000 fine.

By then, Ayre had already discovered a new passion: cryptocurrency. He invested in the Wright-approved Bitcoin Satoshi Vision and set up Ayre Group Ventures, a venture capital firm designed to drive up the coin’s value. Between his money and the backing of the self-proclaimed Satoshi, the hope was that BSV would become a major player in crypto.

Ayre’s plans took a hit in 2019 when Changpeng Zhao, the powerful CEO of the Binance exchange, took to Twitter to weigh in on the controversy around Wright.

“Craig Wright is not Satoshi,” Zhao tweeted to his hundreds of thousands of followers. “Anymore of this sh!t, we delist.”

Soon after Zhao’s tweet, four cryptocurrency exchanges, including Binance and Kraken, removed BSV from their listings. Last December, the Bitfinex exchange also delisted BSV alongside tokens linked to FTX and the bankrupt firm Celsius, after a review of the tokens’ listing qualifications.

Binance didn’t specify why it had taken the step but said in a statement it said it had considered factors such as “evidence of unethical/fraudulent conduct.” The coin’s value fell 50% over two days, Bloomberg News reported, wiping out millions of dollars for investors.

As the self-declared “largest investor in the BSV blockchain ecosystem,” Ayre has sought to further boost his fortune by setting up Antigua-based litigation funding company Softwhale, which will fund cases involving digital assets, among others. Specific to the case BSV is bringing, a spokesman for Ayre said it “has particular resonance for the Ayre Group, which is pleased to support a claim by U.K. investors in BSV affected by conduct that constitutes anti-competitive practices in violation of competition law.”

Wright has also been involved in a number of legal cases related to his claims to be Satoshi. While none of these cases have conclusively proved or disproved Wright’s claims to be Satoshi, neither have they restored investor confidence in the digital asset. As the wider crypto market struggles, the market capitalization of BSV, according to pricing data from CoinGecko, now stands at around $854 million, well below a high of roughly $8.1 billion.

The Minister and the Lords

Shortly after Buckland was ousted from his positions as justice secretary and Lord Chancellor in September 2021, he said he received a call from the prestigious headhunting firm Odgers Berndtson, which wanted to know if he was interested in spearheading a class-action lawsuit against several large cryptocurrency exchanges.

Buckland didn’t have much experience with crypto, but in an interview with Bloomberg, he said that the suit was compelling enough to persuade him to overlook the past legal travails of the man he knew to be paying his salary. His appointment was approved by a parliamentary watchdog, though correspondence between Buckland and the watchdog showed only that Softwhale was financing BSV Claims with no mention of Ayre.

The former justice secretary lasted only a matter of months before he was recalled to government, leaving Currie to lead the litigation with the help of an advisory board that included Tyrie. But soon after his departure the company filed suit on behalf of all UK residents who owned BSV between April 2019 — when the coin was delisted — and July 2022. It argued that investors were entitled to £9.9 billion in damages for losses incurred in connection to the delisting.

If the Competition Appeal Tribunal decides that the claim can proceed, it would mark the first time that anti-competitive charges involving digital assets will be heard in a UK court, according to a memo published by law firm Crowell & Moring LLP.

In a statement released when the lawsuit was filed, Currie said the case represents “an opportunity to demonstrate that competition law applies in the sphere of cryptoassets.” He did not respond to a request for comment.

The tribunal is expected to rule in coming months on whether the case can move forward.

If it does, that would just be the beginning. There could be many more steps before the case is resolved, but for Ayre and Wright, a legal victory could bring them one step closer to taking Bitcoin Satoshi Vision mainstream. As for the Lords still affiliated with BSV Claims, so long as the case keeps winding its way through UK courts, they’ll keep collecting regular paychecks.

--With assistance from Emily Nicolle.