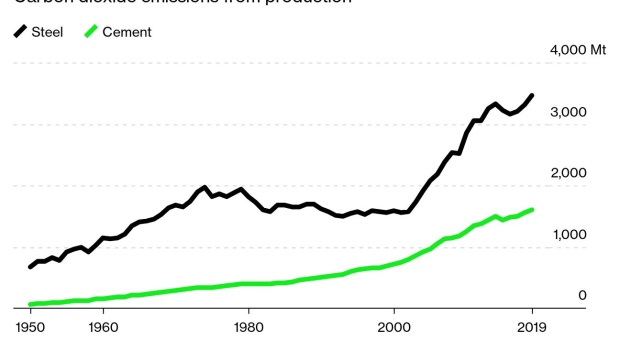 Emissions rise from a chimney at a Tata Steel Ltd. plant in Jamshedpur, Jharkhand, India, on Monday, Feb. 11, 2019. Tata Steel is shifting its focus to India, where a government-led thrust on infrastructure is supporting demand. Plans are underway to double capacity in five years through expansions at existing mills and acquiring indebted domestic mills. Photographer: Anindito Mukherjee/Bloomberg , Bloomberg

It’s a big plan, but short of details. Still, it bridges two aspects of decarbonization: technologies that exist today and are economical at scale, and those that need a major effort to get to that point.

A factory capable of manufacturing 100 gigawatts of solar panels in nine years is impressive, certainly, but it’s not out of the realm of today’s possibilities. A number of companies already manufacture more than 10 gigawatts of modules a year. Scale exists for batteries too, and manufacturing expansions that will more than double today’s production capacity are already underway. Those technologies plug right into our electrical grid, as do fuel cells.

Hydrogen is different. It can play a role in the power sector as a zero-carbon fuel, but it probably has more value in industrial processes that need high heat, historically supplied by natural gas, coal, or oil. Swedish steelmaker SSAB AB is planning to make zero-carbon steel within five years using hydrogen. Doing so in a zero-emissions way—that is, using electrolyzers powered by renewables to isolate hydrogen atoms from water molecules, rather than deriving hydrogen from fossil fuels—depends on a number of factors, beginning with competitive cost. Cost is a function of supply, which is in turn a function of manufacturing cost—which is where Ambani’s gigafactory-sized ambition comes in.

Two of our most essential modern industries—steel and cement production—are still very far from decarbonization. Global greenhouse gas emissions from these two sectors have risen tremendously since the middle of the last century. Steel, thanks to an extraordinary surge in production in China, doubled its emissions from 2000 to 2015. Cement emissions have risen more than 20-fold since 1950.

Zero-carbon electricity will be instrumental in decarbonizing, but it can only go so far, and we’re still quite a ways away from there. Power sector emissions flattened out early last decade, and almost certainly peaked for good in 2018. Greater demand for renewable power will drive that curve down further, which will in turn incentivize its use in any process that can substitute electricity for something that creates greenhouse gas emissions.

In steel, that could mean replacing the coking coal used in blast furnaces with renewably-produced hydrogen, as SSAB plans to do. For cement, that could mean replacing some of the natural gas burned in the production process with green hydrogen. Ideally, this is all a virtuous cycle—their success creates demand, which incentivizes more supply, which in turn drives down prices, which in turn creates more demand.

Cement has more than just a heat problem; it also has a chemistry problem too. The molecular transformation of limestone into cement releases carbon dioxide, which is a problem renewable electricity can’t solve. There’s innovation underway on the chemical side of things too, though. This week, California-based startup Fortera raised $30 million to fund the invention of lower-carbon cement.

Today’s gigafactory era shows us just how far we’ve come. In 2009, an investor-sponsored report with the somewhat cringe-y name Gigaton Throwdown(1) asked “entrepreneurs, business leaders, and policy makers to ‘think big’ and understand what it would take to scale up clean energy massively over the next 10 years.” Hydrogen was barely mentioned, i.e. was definitely not seen as a technology with the potential to scale.

Back then, hydrogen was probably not even a glimmer in Mukesh Ambani’s eye, either. Perhaps Reliance’s gigafactories can deliver hydrogen at a scale that late-aughts venture capital investors and policymakers wouldn’t have been able to comprehend. If it can, it will push decarbonization into new frontiers, too.

(1) Sadly, the report’s site is no longer active, and GigatonThrowdown.org takes readers only to a 2014 blog post on “How to Make Your Website Load Faster.”