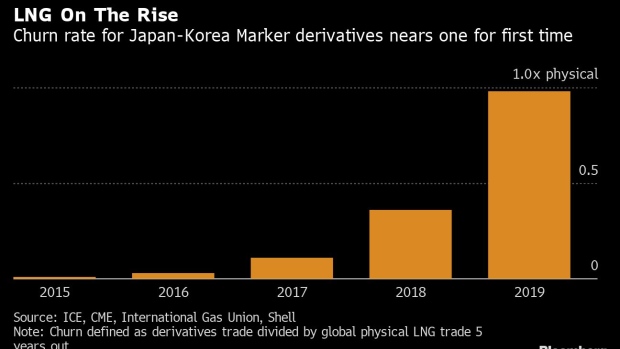 (Bloomberg) -- Financial derivatives linked to liquefied natural gas are mushrooming as a market crash and a boom in physical trading creates an appetite to manage risk and provides opportunity to speculate on prices.

The growth is helping speed up the development of a truly global trade in the fuel, linking together what has historically been geographically isolated markets into something with the depth and complexity of oil, the world’s most heavily traded energy commodity.

“This is the globalization of natural gas,” Gordon Bennett, Intercontinental Exchange Inc.’s managing director of utility markets, said in an interview.

The clearest example of the trend is the expanding use of the Japan-Korea Marker, a benchmark for LNG delivered to northern Asia, the top consuming region for the fuel. Trading volumes rose to an all-time high in February, and open interest tripled in the past year to a record. Higher JKM volumes have tracked the development of increasingly vibrant gas hubs in the U.S. and Europe, as well as Asia.

While LNG tankers have been delivering fuel commercially since the 1960s, it’s only in the past few years that spot trading went beyond a niche in the energy industry. That’s because the fuel was mostly bought and sold through rigid long-term contracts that sent shipments from sellers directly to pre-arranged buyers.

But more nations and companies have started to supply LNG, and many more ports are springing up to receive the shipments and deliver the gas into pipelines. A flood of new supply in the last decade -- in particular the start of U.S. exports in 2016 -- has helped make the flow of those seaborne cargoes more frequent, global and flexible. That, in turn, has spurred a variety of contract structures and pricing options that require derivatives.

Spot prices traditionally mimicked moves in the oil market, as most of the world’s long-term LNG contracts are indexed to crude. But their prices have diverged over the last few years thanks to the increase in liquidity of the physical and paper gas markets.

The fact that JKM barely budged during the historic meltdown in crude prices this week illustrates the market’s growing confidence in the benchmark, which better reflect the fuel’s unique supply-demand fundamentals.

“If the crash had happened a couple of years earlier, the impact on spot LNG would be far greater than what it is today,” said Edmund Siau, a Singapore-based analyst with energy consultant FGE. “This shows the rapid progress that spot LNG has made in decoupling from oil.”

One way to see how far the LNG derivatives market still has to grow is the so-called churn rate, which is a measure of the ratio of paper to physical trade in a commodity. The benchmark U.S. gas future contract -- delivered only by pipeline and centered at Henry Hub -- has a churn of 41 times the nation’s gas consumption. In Europe, with trading centered in Amsterdam and pricing a mix of pipeline and LNG supply, is eight times the physical market, according to ICE. JKM, a pure LNG indicator, neared a one-to-one ratio last month.

With a growing number of physical cargoes being traded on a fixed price, there will be additional risks to manage. The LNG volume represented by the trade in JKM derivatives this year will probably surpass combined imports into the region including by Japan, Korea, Taiwan and China, said Ciaran Roe, director for global LNG at S&P Global Platts in Singapore.

Physical bids, offers and trades on Platts LNG Market on Close, the main mechanism for determining the JKM price, has more than doubled in February from the same month last year, according to Roe. And the first LNG derivatives contract was sold on the so-called MOC last week, which added a layer of transparency by showing company names, contract sizes and prices. The narrowing price difference between physical and futures prices is an indication that the market is becoming every bit as evolved as crude.

“Very, very quickly LNG is starting to look like a twin of oil,” Roe said by phone. “If you compare the way the markets are forming, they are very, very similar now.”

To contact the editors responsible for this story: Reed Landberg at landberg@bloomberg.net, Ramsey Al-Rikabi