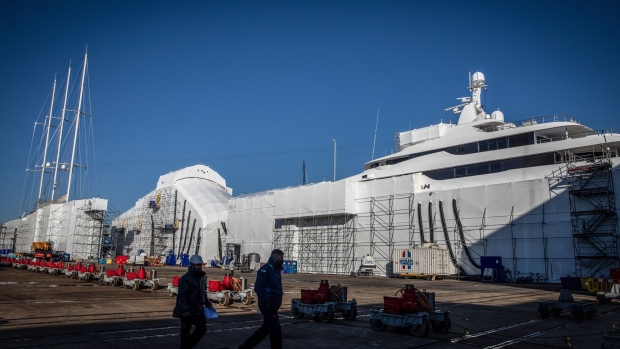 (Bloomberg) -- There are some things that even billionaires in their superyachts can’t escape.

The floating mansions may provide refuge from Covid-19 lockdowns and miserable winters, but no one is immune to climate change. As sea levels rise and extreme storms become more frequent, the uber-rich face a future in which their favorite playgrounds could no longer be fit for sailing.

At least for some, there’s a healthy dose of climate guilt that comes from owning the world’s most carbon-intensive asset. Or at least an awareness of the angst over the one percent’s gas-guzzling habits. Luxury liners aren’t going away — more than 600 large yachts are set to join the global fleet by 2025, according to industry publication Superyacht Group — but there’s a push within the industry to at least try and make the boats a little bit greener.

“Our business is pure leisure, it’s not essential, and it’s therefore expected to be as sustainable as possible,” said Pepe Garcia-Aubert, president of MB92 Group, which runs the world’s biggest superyacht servicing operation based in Barcelona. “Either we manage to do it or this won’t exist in 50 years’ time.”

Large scale zero-emission shipping is still a long way off, but yacht retrofitters can make changes on the margin even if manufacturers can’t yet eliminate pollution from burning fuel. MB92’s shipyard in Barcelona is fully electrified so most yachts can turn off their diesel generators while they’re docked. Spanish utility Endesa SA only provides electricity generated by renewable sources, said Garcia-Aubert.If the boats need a new lick of paint, it’s done onshore. It’s a more expensive way to work, but far less polluting. Painting boats while they’re floating in the water means excess paint washes directly into the sea, toxic chemicals and all. MB92 installed a 45 million euro ($51 million) ship-lift that can hoist 4,800-tonne boats onto land. Another ship-lift will start operating in 2022 at its shipyard in La Ciotat, France.

In Barcelona, boats that are being repainted are completely hidden under a white plastic tent which prevents paint particles from being released into the air. The fumes are channeled into tubes, dubbed “washing machines,” where they’re mixed with water, air and ozone so they can be disposed of more cleanly.

Getting rid of the plastic structure and sheets has become one of the company’s major challenges, says Sustainability Coordinator Marc Hervas. MB92 is working with the Catalan Center for the Study of Plastic at the Polytechnic University of Catalonia to explore ways to reduce the use of non-recyclable materials.

“Recycling wood and metal is a relatively easy task, but giving a second life to plastic is much harder,” said Hervas. “The main problem is finding operators equipped to handle single-use material containing very high quantities of fire-retardant chemicals.”

One of the company’s goals is to fully replace all that plastic with aluminum. The material is flexible enough and easier to reuse. Other green initiatives in the works include using mussels to filter oils and biomass from the water near the port, and deploying sea drones to remove oil and fuel spills.

Customers also have another easy way to, theoretically, shrink their carbon footprints. MB92 is collaborating with Submon, a local scientific group, to help yacht owners fund projects that rehabilitate parts of the seabed so they can better absorb CO₂. It’s a practice called offsetting that’s come under sustained criticism from experts, who say it’s often impossible to tell the true climate value of such credits.

To calculate the emissions impact of ships, MB92 plans to use a tool created by Water Revolution Foundation, a non-governmental organization that works with the industry. The software has been adapted to include the refitting process and give customers access to offsets.

Vienna Eleuteri, founder of the Water Revolution Foundation, stresses that it’s an initial step. An anthropologist who specializes in computational sustainability, Eleuteri says superyachts are a “strategic niche.” Their owners have the means to act on climate change and can influence the rest of the maritime sector.

“It’s an industry that can invest a lot of money, with the potential to become to the maritime world what Formula 1 has been for the automotive one,” Eleuteri said. “Like Formula E spearheaded research on cars’ electric engines, hybrid and hydrogen-based solutions… superyachts can do the same for boats.”