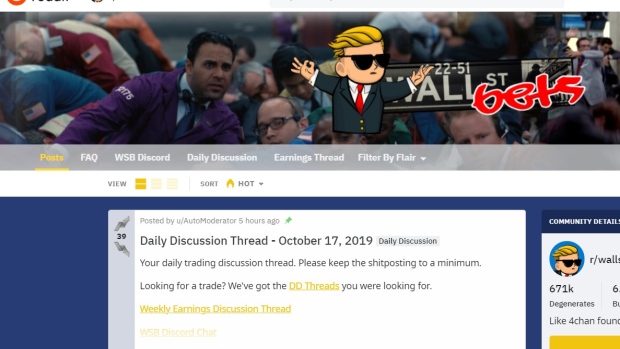 Screengrab of the WallStreetBets subreddit page.

Before he became famous for the big short in the 2000s, Michael Burry discussed stock trades on online message boards. Burry’s posts were thoughtful, well-reasoned and showed deep research.

The sub-Reddit WallStreetBets, with the tagline “Like 4chan found a Bloomberg terminal,” is rarely any of those things.

The forum’s 600,000 members dub satirical options-trade commentary over scenes from TV shows like It’s Always Sunny in Philadelphia and rant about a loss that caused a member to get their “face ripped off.” Toss in a smidge of casual racism and a whiff of locker-room misogyny, and WallStreetBets is a window into the back rooms of a seedy stock-market casino with no Burry to be found.

The chat does have Eddie Choi, however. Choi said WallStreetBets taught him how to trade options — contracts that offer the right to buy or sell a security by a specific date. Choi became a rock star on the forum last month after sharing details of his own big short — playing Roku Inc. options.

“I’m naturally a risk-loving person,” Choi said in an interview. “When I see these people making a lot and losing a lot of money, it caught my attention.”

When the stock of Roku, a streaming-service provider whose shares tend to fluctuate, cratered 19 per cent on Sept. 20, Choi’s initial US$766 investment in Roku puts — a bet that the stock would decline — ballooned to US$50,553 overnight, a 6,500-per-cent gain. The profit was so meaty because the puts Choi bought were close to expiration and far out of the money. Bloomberg confirmed Choi’s account via screen shots of his Robinhood Financial trading history.

A few days later, lightning struck again. Choi doubled his Roku winnings by buying more puts, this time on the S&P 500 exchange-traded fund. When the SPY fell to US$295.87 on Sept. 24 — the first time it closed below $297 in more than two weeks — his US$297 puts that were set to expire on Sept. 25 went ka-ching.

“I use it to develop my watch list,” Choi said. “Of course, there are threads where people are just trolling, but you can find good entry points.”

​Take, for example, a posting from joeyrb that offered an explanation of why the VIX Index hasn’t spiked during the trade war:

In the movie, The Big Short, Michael Burry was played by actor Christian Bale. Choi said he wants to avoid the spotlight, so he cashed out his much smaller big short rather than risk the ridicule of his online community.

“I don’t really want to stop trading options and reading WallStreetBets because it’s entertaining and funny,” Choi said. “But I didn’t want to be infamous on the forum for losing all my gains.”