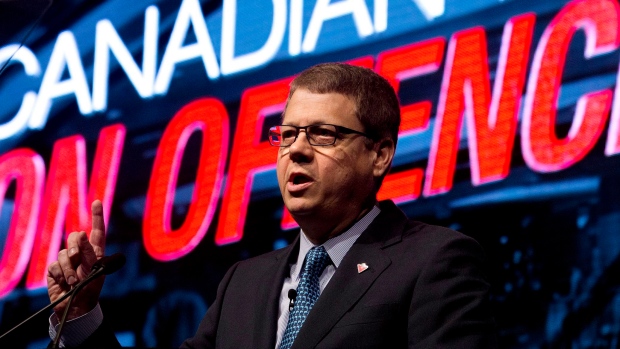 Canadian Tire President and CEO Michael Medline speaks to shareholders at the company's annual general meeting in Toronto on Thursday, May 14, 2015. , The Canadian Press

Michael Medline lasted less than two years as CEO of Canadian Tire. But that short stint isn’t dissuading the parent company of Sobeys from picking him to guide the grocer onto stronger footing as it struggles to digest a three-year-old $5.8-billion takeover of Canada Safeway.

Empire Co. (EMPa.TO), the parent of Sobeys, announced on Thursday that Medline has been appointed president and CEO of both Empire and Sobeys, effective immediately, following “an extensive international search.” Medline is also joining Empire's board of directors.

“This is a stretch job [for Medline],” warned Brendan Caldwell, president and CEO of Caldwell Investment Management, in an interview with BNN. “It is a bit of a Hail Mary pass.”

Medline replaces François Vimard, who served as interim president and chief executive officer since last July after former Chief Executive Marc Poulin was abruptly ousted less than two weeks after Empire booked a $1.29-billion impairment charge on its Western Canadian assets in the fourth quarter of the fiscal year.

Medline is joining less than a year after he was suddenly replaced as CEO of Canadian Tire (CTCa.TO) by his predecessor, Stephen Wetmore.

“While Mr. Medline has extensive experience and a deep understanding of Canadian retail, he will be new to the unique dynamics of the Canadian grocery industry,” cautioned Scotiabank Analyst Patricia Baker in a report to clients.

“Although we had identified the various risks associated with integration, including the amount and pace of change required, we underestimated the impact and the time needed for the organization to adapt to those changes. This had a clear and negative impact on our first quarter results," said Poulin in the earnings release.

“As anticipated, our second quarter results continued to trail performance versus the same period last year as the integration of Safeway continues to present challenges,” said Poulin in the earnings release.

“The challenges that we experienced in the first half of fiscal 2016 related to the integration of our Safeway business only intensified in the third quarter. In addition, increased promotional activity across the West as well as a difficult economic environment mainly in Alberta and Saskatchewan, resulted in sales erosion in our Safeway banner and West business unit," Poulin said in the earnings release

“The previously reported challenges in Western Canada that have had a negative effect on our results over the past three quarters deepened through the fourth quarter...," said Poulin said in the earnings release.

The latest evidence of Empire's challenges came last month when it posted a 51.7-per-cent plunge in its fiscal second-quarter profit. At the time, Vimard said management was looking to "advance both the scope and scale of cost reductions."

Empire’s stock plunged 40 per cent in 2016 as the Safeway integration setbacks mounted. Among analysts who cover the stock, there’s one buy, six hold, and four sell recommendations.

“Would I rush right out [as an investor]?,” Caldwell said. “I’d like to see how results actually progress because, like their takeover that they’re having such trouble integrating, a new big transition like this could go really well. Or…”

Some observers are more encouraged by the leadership change.

“We believe that [Medline] will be able to really help bring Empire alive from this deep value and start to create some life there,” said James Telfser, partner and portfolio manager at Aventine Asset Management, in an interview with BNN.

"I'm looking forward to working with our entire team to put together and execute on a strategy that will thrill our customers, build our brands, and excite our shareholders," Medline said in Empire's press release.

Vimard will remain with Empire as executive vice president.