In the corner of the U.S. rates market that’s most attuned to Federal Reserve policy, a bet has emerged that will deliver a handsome payoff if traders move up the timing for when they expect the next tightening cycle to begin.

The trade is via options on eurodollar futures, and it’s been building in size over the past week. The ramp-up coincides with polls suggesting a growing chance of a Democratic sweep of both the White House and Congress in the Nov. 3 elections. For many investors, that scenario would pave the way for a significant fiscal-spending package, potentially hastening the economy’s rebound from the pandemic and causing inflation to accelerate toward the Fed’s goal.

The wager in focus has cost around $1 million in options premiums, with a maximum potential payoff of about US$50 million. It will prove most profitable if by next quarter futures have priced in the equivalent of roughly three quarter-point rate increases by March 2024, meaning Fed tightening beginning months earlier. In comparison, the eurodollar market isn’t even reflecting a full quarter-point hike until June 2024. The Fed, for its part, is signaling it will keep rates near zero at least through 2023.

“Forward eurodollar contracts are influenced by where rates are in the next year or two -- can you comfortably say that there’s not going to be a big inflation surge in the next two years?” said Alex Manzara, a derivatives broker at R.J. O’Brien & Associates.

A buyer of this options wager started emerging on Oct. 9, when most of the purchases took place. The position consists of more than 660,000 options, which has raised eyebrows among traders, as has the sum at stake.

The bet has created buzz in a market that’s seen activity dwindle, in part because the trading pit in Chicago was shut for months amid the virus. Since the start of the year, daily eurodollar options volume has exceeded one million contracts on 98 occasions, just 10 of which have come since the start of May. 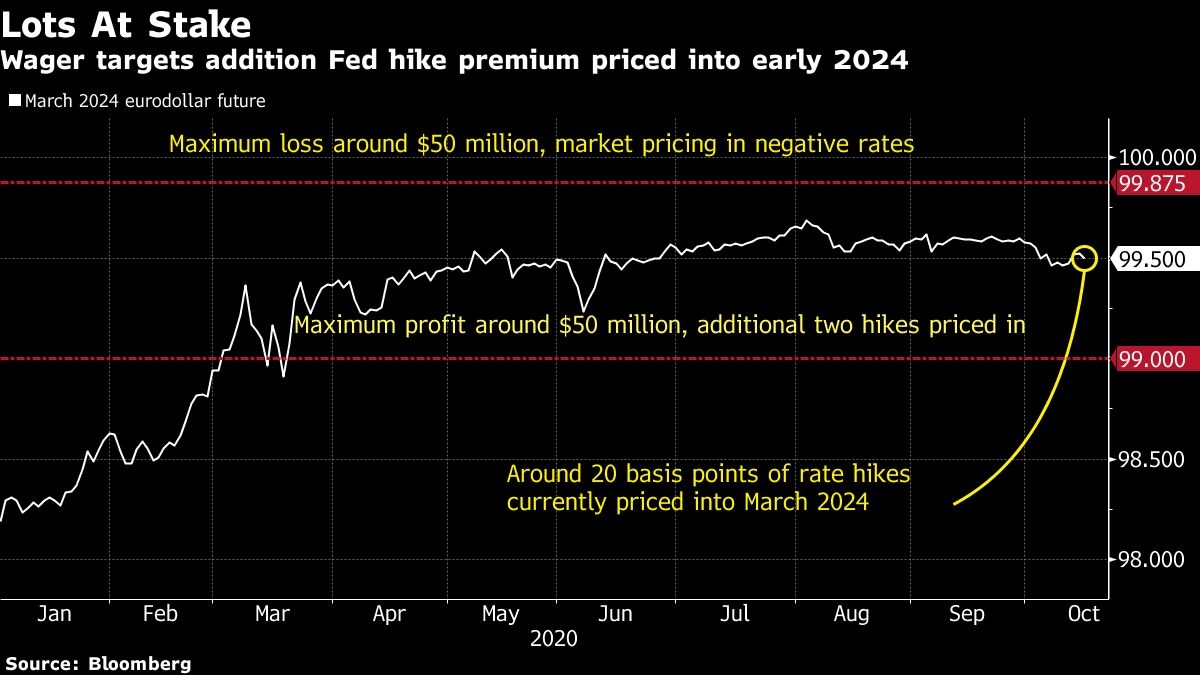 The potential losses if the bet doesn’t work out by the expiry date on March 12, 2021, are adding to the attention. The downside could tally around US$50 million if the market moves in the opposite direction, toward pricing in a negative Fed policy rate.

Of course, that’s a step Fed officials have repeatedly said they don’t want to take. And it’s hardly the economic outcome that markets are bracing for, with stocks not far below record highs. And further stimulus may be coming regardless of the election results.

“It’s going to rely on perception,” Manzara said. And the perception now behind the buying of such a eurodollar options structure “is that no matter who wins the election, and even though they haven’t been able to agree on stimulus, big stimulus is coming,” he said.