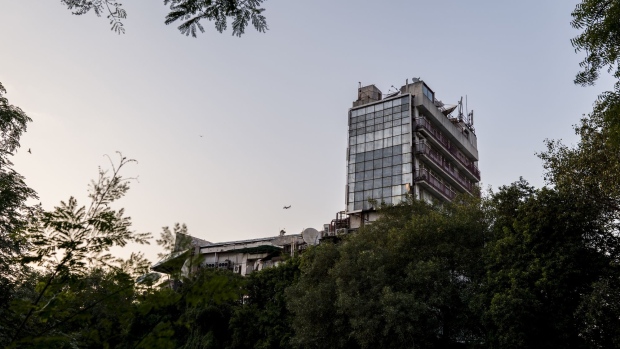 (Bloomberg) -- Soon after Gautam Adani announced his hostile takeover bid for news broadcaster New Delhi Television Ltd., he was congratulated via tweet by a senior executive at the conglomerate helmed by Mukesh Ambani -- Adani’s billionaire rival and his predecessor as Asia’s richest man.

The public toast from Parimal Nathwani, director of corporate affairs at Ambani-led Reliance Industries Ltd., hinted at an amicable co-existence, if not cooperation, between the established empire and the rising upstart at its heels.

In fact, Adani could not have mounted his NDTV bid without at least the knowledge of a couple of close Reliance associates who were linked to a little-known entity, called Vishvapradhan Commercial Pvt Ltd., or VCPL. It was the world’s new second-richest man’s acquisition of VCPL that in turn helped him make a takeover bid for NDTV.

The NDTV acquisition, if successful, would make Adani and Ambani straight-up rivals in a sector for the first time, given Ambani’s control of large media assets including news channels. While observers have long anticipated the tycoons going head-to-head in industries across India’s $3.2 trillion economy, the first of these encounters appears to be more conciliatory than confrontational, with potentially worrying consequences for the thousands of small firms in the sectors they’re aiming to dominate.

NDTV’s founders -- Prannoy Roy and Radhika Roy -- took a loan from VCPL in 2009 to repay another debt. This interest-free loan from VCPL could be converted into NDTV equity and, as the Indian markets regulator later found, was sourced from a firm that was a wholly-owned subsidiary of Reliance Industries. While VCPL since changed owners, it retained links to the Reliance group, according to public filings.

Adani Group acquired VCPL last month and with it, an indirect 29.2% share in NDTV. The Roys said they never consented to this stake purchase. The Adani Group is set to make an open offer in October to NDTV’s minority shareholders in order to buy a further 26%.

“It looks like the two corporate giants are hand in glove,” said Zoya Hasan, professor emerita at the Centre for Political Studies at Jawaharlal Nehru University in New Delhi, referring to the sale of VCPL to the Adani Group. Increased control of India’s nascent but fast-growing media sector by the two billionaires will have “significant consequences,” she said.

A report that the two tycoons have put in place a non-poaching pact in which they have agreed not to hire each other’s employees, in order to avoid a war for talent in their overlapping business interests, have added to concerns that the two conglomerates may one day carve up the Indian economy to the detriment of smaller players.

Some contracts extended to potential employees were withdrawn after the pact was put in place, Business Insider reported. Representatives for both companies declined to comment on the report.

Buyouts by giants like Reliance and Adani can “hurt smaller media firms” who stand no chance against them, said Indira Hirway, director of the Centre for Development Alternatives in Ahmedabad, Gujarat. “This is applicable for any business including green energy, cement or retail,” she said.

The lever that Adani pulled in the NDTV deal is linked to the loan taken by the Roys 13 years back.

A June 2018 order from the Securities and Exchange Board of India said that the Roys’ 3.5 billion rupee ($44 million) loan from VCPL was ultimately sourced from Reliance Strategic Investment Ltd., a subsidiary of Ambani’s flagship listed firm. The loan agreement entitled VCPL to share warrants that could be converted into NDTV equity even if the loan was repaid, according to the order. The regulator investigated the loan at the time because of allegations that VCPL had skirted share purchase and takeover rules.

In 2012, Reliance sold VCPL to entities with links to the Reliance group, according to people familiar with the matter who asked not to be named discussing the private arrangement. Two names come up in Indian media reports: Surendra Lunia and Mahendra Nahata.

Lunia told The Economic Times in August that he owned VCPL “for the last 10 years” until he sold it to the Adani Group. Lunia was CEO of the Nahata-owned Himachal Futuristic Communications Ltd. until 2010, and is currently a director of Infotel Telecom Ltd. that operates out of Reliance headquarters in Mumbai, according to corporate filings.

Nahata was a director at Reliance Jio Infocomm Ltd. through at least March 2021 and has represented Ambani’s telecom unit at high profile industry events. Reliance had entered the telecom sector in 2010 by buying a firm, Infotel Broadband, that Nahata founded.

Nahata and Lunia did not respond to emails and calls seeking comment on VCPL and its sale to the Adani Group.

Cross-directorships don’t necessarily imply that Adani had or needed Ambani’s nod to make his moves, according to people familiar with the situation.

“It’s not a very transparent deal,” said Anand Pradhan, a professor at Indian Institute of Mass Communication in New Delhi.

Set up in the 1980s, NDTV was a pioneer at a time when India’s main news channel was a stodgy state-owned broadcaster. It’s grown into a prominent media house that broadcasts news in English and Hindi and is one of the most popular news handles with more than 35 million social media followers.

To allay some of the fears around its bid, Adani Enterprises Ltd. said in an exchange filing that it intends to grow NDTV’s business and “empower Indian citizens” by setting up a “credible next generation media platform.”

Seen as relatively critical of Modi’s government in a country where press freedom has been in decline, the house of NDTV’s founders has been raided by local tax authorities and the firm probed by investigative agencies for alleged money laundering in recent years. The Roys have denied wrongdoing in the past.

NDTV would be a far bigger stake in the sand for the Adani Group, with its three news channels and big online audience.

It’s unlikely to be the last, as Adani -- fueled by a rapid rise to the top of global wealth rankings -- pushes into green energy, airports, data centers, digital services and cement as he diversifies away from coal businesses his empire was initially built on.

The two tycoons together have the potential -- and maybe the relationship -- to remake the face of the Indian economy.

“They have big pockets,” said Pradhan, the journalism professor at Indian Institute of Mass Communication. “They can afford losses and give the competition a run for their money.”