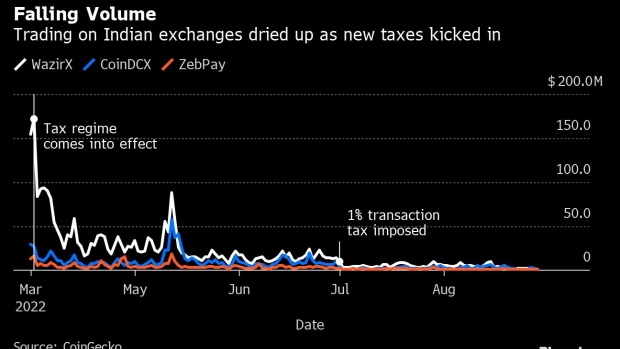 Lights illuminate a D-Link Corp. networking device connected to mining rigs operating inside a shipping container converted into a mobile cryptocurrency mining farm, operated by BitCluster, at Rodniki Industrial Park in Rodniki, Russia, on Tuesday, Feb. 6, 2018. Cryptocurrencies have been pummeled by a wave of bad news, including the threat of more regulation from governments including the U.S., China, South Korea and India. Photographer: Andrey Rudakov/Bloomberg , Bloomberg

(Bloomberg) -- One of India’s oldest cryptocurrency exchanges is looking overseas for growth as the nation’s tax policies crush the domestic market.

Eight-year-old ZebPay has applied for a license in Singapore and is assessing the potential of a similar step in the United Arab Emirates, outgoing Chief Executive Officer Avinash Shekhar said in an interview.

While the company will retain its focus on India, the 1% transaction tax the nation imposed on crypto this year is hurting trading volumes and the levy “has to come down, otherwise things are not going to improve,” he said.

Daily volumes at key India-based platforms are down over 90% since the transaction levy took effect in July. That’s exacting a toll on brokerages. For instance, Binance-affiliate WazirX -- India’s largest crypto exchange -- has laid off nearly 40% of its staff. Shekhar said ZebPay has implemented salary cuts, including a 6% drop for non-management staff.

He is leaving to start his own Web3 venture, which will receive its seed funding from ZebPay, but will also continue in an advisory role at the firm. The term “Web3” refers to a vision of a decentralized internet built around blockchains.

Shekhar said he plans to start his venture out of India but warned the crypto tax is leading entrepreneurs to develop Web3 projects from Dubai or Singapore.