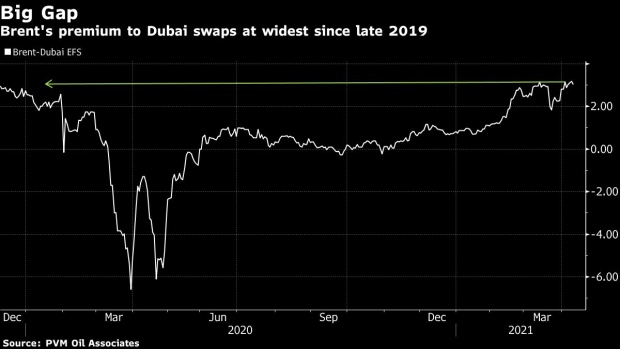 (Bloomberg) -- A price war may be looming in the global oil market as rising output from OPEC+ and the Middle East boosts the competitiveness of the region’s shipments, potentially forcing other suppliers to discount their barrels.

The warning signs can be seen in the widening of a key price spread that’s used by traders to determine the affordability of cargoes from the Middle East against Brent-linked barrels. Right now, the gap is close to the widest in more than 16 months, and that doesn’t bode well for oil that’s priced against Brent.

“There’s much cheaper crude, and a lot of it coming from the Middle East,” said Grayson Lim, a senior oil analyst at FGE. “Those Brent-linked cargoes will need to be offered at a huge discount for buyers in the region to snap up the barrels,” he said, referring to Asian users. “But if they’re heavily discounted, there’s a chance that Chinese buyers may come out to buy.”

Earlier this month the Organization of Petroleum Exporting Countries and its allies decided to relax the deep production curbs that rescued prices from last year’s pandemic-driven collapse. The move will see more than 2 million barrels a day in supply restored in stages through to July amid expectations that the roll-out of vaccines will underpin further gains in energy consumption. So far, the plan has been defended by leading architect Saudi Arabia, with futures for Brent and West Texas Intermediate up more than 20% year-to-date.

At the same time that the OPEC+ cartel is preparing to loosen off the taps, there have been continuous flows of clandestine Iranian oil to China. That -- plus planned maintenance of some North Sea fields, which will shrink the flow of Brent-linked barrels -- has pushed out the spread to the widest since late 2019, according to data compiled by Bloomberg.

That’s a big reversal from just a few months ago. The so-called Brent-Dubai exchange of futures for swaps -- to give the marker its formal name -- showed Brent-Dubai at a small discount as recently as November. In October and September, Dubai-linked cargoes were also more costly on some days.

The shift favoring Dubai-linked flows is likely to ripple through the market, prompting buyers to shop around and sellers to respond. In Asia, the widened spread means users will probably scoop up more affordable spot cargoes from the Middle East, unless oil from the Atlantic Basin and West Africa is slashed to stay competitive, according to traders who asked not to be identified.

There may be signs of that already. Last week, Angola’s Sonangol Group again reduced the offer price for a Dated Brent-linked Saturno cargo for May, with the shipment eventually taken by China’s Unipec. Nigeria has also cut official selling prices of Qua Iboe and Bonny Light to the lowest since November.

While Iran’s U.S.-sanctioned barrels aren’t counted under the formal OPEC+ quota system, the flows still contribute to downward pressure on Dubai-linked cargoes. The Iranian shipments taken by China reduce local demand for other spot cargoes. FGE estimates that Iran’s exports of crude, condensate and fuels could easily reach up to 2 million barrels a day in the coming months.