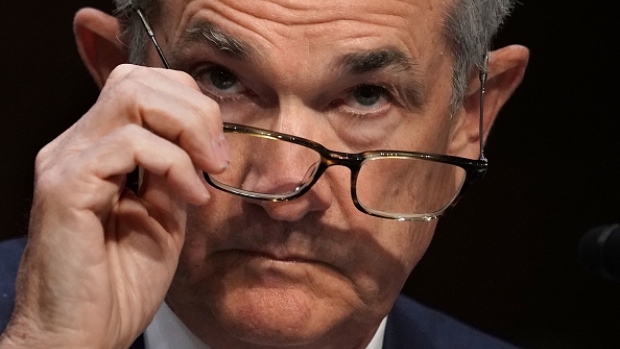 It’s like a design competition. Hardly anyone thinks central banks can fix a stalling world economy with their current tools. So some of the biggest names in finance are trying to invent new ones.

The proposals so far -- including recent entries by billionaire Ray Dalio and monetary policy maven Stanley Fischer -- have one thing in common: They foresee the once all-powerful central bankers taking a more junior role, and collaborating with governments.

That type of stimulus used to be taboo, in part because it risks eroding the independence from politics that monetary policy makers prize -- and President Donald Trump is already threatening. History is littered with cautionary tales in which blurring the lines between central bank and Treasury coffers led to runaway inflation.

But right now, deflation is the big threat. An emerging consensus says the next downturn may need to be fought with direct and permanent injections of cash –- often called “helicopter money’’ -– and that central banks can’t deliver it alone. 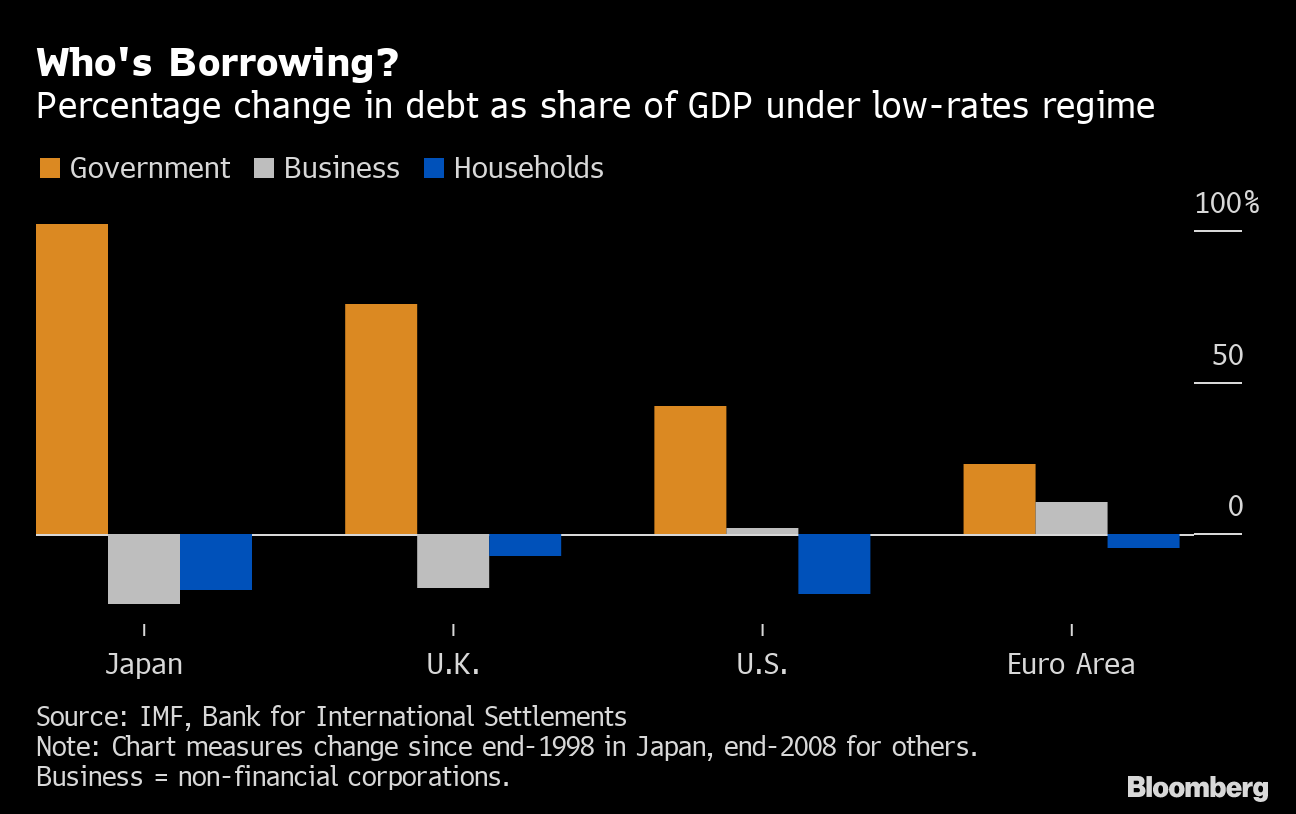 ‘Pushing on a String’

The monetary policy makers can encourage private actors to spend or invest, by making it cheaper to borrow. By historical standards, though, interest rates are near rock-bottom already and the credit cards of households and businesses are pretty maxed out. In the low-rates era, it’s mostly been governments doing the borrowing.

That’s code for involving fiscal policy. Via their budgets, governments don’t have to push the string –- they can open the taps, spending directly into the economy or boosting the purchasing power of consumers or companies by cutting taxes.

The new thinking says central banks can get in on this act too –- an idea, known in the jargon as fiscal-monetary cooperation, that economists are now trying to flesh out. It could solve problems, and maybe create some new ones, on both sides.

Governments have been criticized -- often by those overseeing monetary policy -- for being slow to deliver fiscal support, which typically needs approval by hundreds of lawmakers who may worry about adding to national debts. Central banks can act faster.

The banks would get their hands on some powerful new instruments. But they’d likely have to accept that independence from politicians –- jealously guarded, especially in the age of Trump’s frequent attacks on the Federal Reserve and its chairman Jerome Powell -– has limits.

Where to draw those boundaries is the preoccupation of a recent paper published by BlackRock Inc. and co-written by Fischer, the Fed’s former vice-chair. It argues that monetary stimulus has run out of road as a way to boost economies, while fiscal policy hasn’t been “pulling its weight.’’ 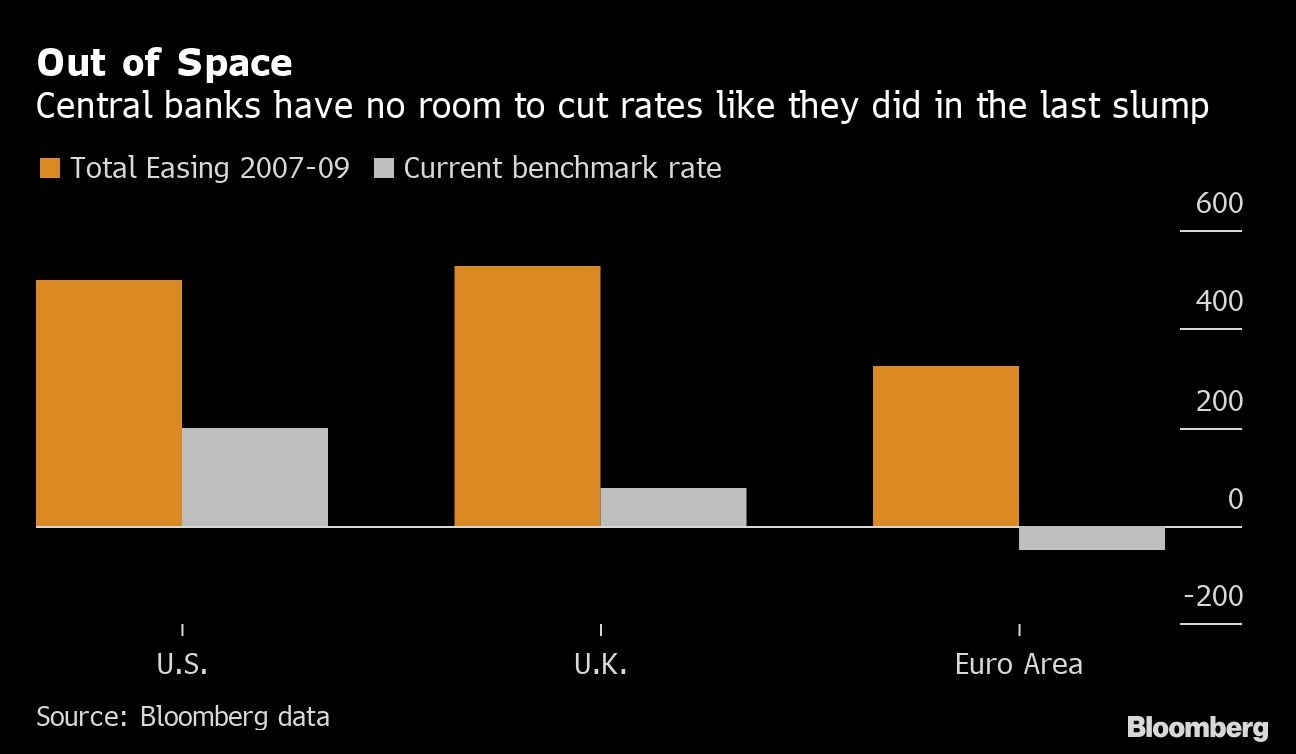 One solution is to combine them –- for example, by letting central banks create money to finance government budget deficits. The challenge, say the BlackRock authors, is to encase such “historically unusual’’ measures in explicit rules -- so that central bankers retain their independence, and can apply the brakes if government spending gets out of control.

Their proposal involves an emergency fiscal fund that central banks could activate when inflation is dangerously below-target and there’s no room to cut rates. The money-tap would shut off automatically once prices are back on track.

The details differ, but plenty of others have reached similar conclusions about what central bankers could do next -– provided they have government authorization.

“When you have the next downturn, QE isn’t going to be as effective, interest rates aren’t going to be effective,’’ Dalio, founder of Bridgewater Associates LP, the world’s biggest hedge fund, told Bloomberg TV.

“Then you need fiscal policies and debt monetization,’’ he said. “We’re going to enter a new realm.’’

Modern Monetary Theory, a school that says government spending and taxes are better tools to steer the economy than interest rates, has also been gaining support. MMT is relaxed about monetary financing of budget deficits, and doesn’t see it as much different from selling bonds.

Along with the lack of monetary ammunition, one reason behind the big rethink may be deepening inequality, especially after 2008’s financial crisis.

As central banks shifted from setting rates to seemingly propping up financial assets, they became more vulnerable to the charges that their policies helped the rich most, and went beyond their remits.

A new book by financial commentator Frances Coppola, titled “The Case For People’s Quantitative Easing,” calls for newly minted central-bank money to be funneled straight into the bank accounts of households or small businesses. That kind of stimulus will deliver more growth and better distribution, she argues -- as well as addressing challenges like ageing populations and automation.

Another driver of change is that the doctrine of central-bank independence was forged in an era of surging prices. But rich countries now face the opposite problem: deflationary forces. At one point this year, more than $17 trillion of debt -- mostly in Europe and Japan -- was yielding less than zero.

Italian economist Guido Tabellini says that backdrop has forced him to change his views. A professor of economics at Bocconi University, Tabellini co-wrote a paper on central bank independence in the 1990s, when the European Central Bank was being created.

“The benefit of monetary-fiscal policy coordination is certainly higher now,’’ he said, and there’s a case for easing the curbs on financing government debt -- which can be done without sacrificing central-bank independence.

Click here to read a proposal by Jamie Rush, chief European economist for Bloomberg Economics, for fiscal-monetary coordination in the U.K.

“Helicopter money is not a free lunch,” Rush writes. “But it might still be the best value meal going when the next crisis hits.”

“Exactly how the money gets into the helicopter is likely to be less important than how it is dropped. But, if there are benefits to explicit monetary financing of deficits they are likely to stem from policy coordination.”

It’s not as if there’s been no cooperation in the past decade.

After the 2008 crash, central banks routinely worked with governments. Sometimes they pushed against the boundaries of their mandates –- like when the ECB’s Mario Draghi put a central-bank backstop behind government debt, by promising to do “whatever it takes’’ to save the euro.

But if the post-crisis environment has strengthened the theoretical case for working together, in practice it’s often led to unusually fraught relations between politicians and technocrats.

It’s in Japan that collaboration has been taken furthest.

The Bank of Japan has been a key player in Prime Minister Shinzo Abe’s plan to reflate the economy with a mix of monetary stimulus and fiscal spending. It now holds 43% of the national debt, which is the world’s largest.

In theory, that debt hasn’t been monetized. In reality, most analysts think it has, and the sky hasn’t fallen in.

“The market does not expect the government of Japan to ever be able to repay this debt,’’ Bank of America-Merrill Lynch strategist Athanasios Vamvakidis wrote in a July report. “The BOJ may as well make it explicit.’’

Japan was the first country to cut interest rates to zero, and the first to try quantitative easing. Given its close working relations with the government, the BOJ may provide a blueprint for the latest ideas about central banking too.

“Central bank independence increasingly looks like a brief historical episode that peaked around the turn of the century,’’ said Joachim Fels, global economic adviser at Pacific Investment Management Co. “Like it or not, get used to the new normal of dependent central banks.’’