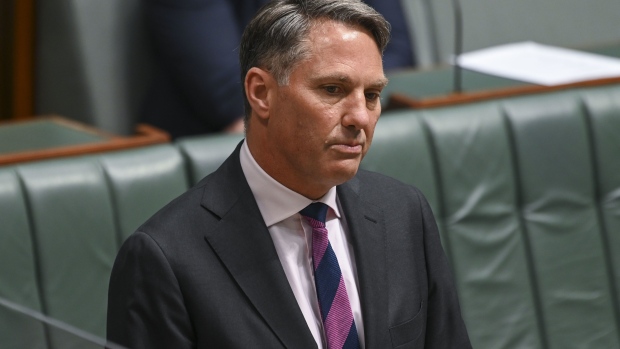 Anthony Albanese, Australia's prime minister and leader of the Labor Party, shakes hands with David Hurley, Australia's governor-general, after being sworn in during a ceremony at the Government House in Canberra, Australia, on Monday, May 23, 2022. Albanese has been sworn in as Australia’s 31st prime minister in a short ceremony in Canberra on Monday, taking office with a promise of swift action on climate change, greater gender equality and improved wage growth. , Bloomberg

Anthony Albanese was sworn in as Australia’s next prime minister together with key members of his political team Monday even as votes still get counted for a handful of key seats and his Labor party remains short of a majority.

The rather unusual arrangement has come about as the Quad, which brings together the US, Japan, India and Australia on matters of security, meets in Tokyo the very next day. Albanese, 59, wants to represent the country and renew ties with the leaders as the new prime minister.

He will be joined in Tokyo by close ally Penny Wong, who was appointed foreign minister while Labor’s Deputy Leader Richard Marles becomes deputy prime minister. As Albanese wants the economic team to start work on Monday, Jim Chalmers was named treasurer and Katy Gallagher takes the finance ministry portfolio.

The Labor officials are among the senior party leadership and will be responsible for the management of a A$2.2 trillion ($1.5 trillion) economy and its diplomatic and defense relationships. The rest of the cabinet is expected to be sworn in the coming days.

Here’s a look at Albanese’s core team and what to expect from them:

As Deputy Labor Party leader and Albanese’s right hand man, Marles was handed a new shadow minister portfolio on post-Covid national reconstruction that covers jobs, small businesses and skills in a bid to gear up for the elections.

A former trade minister in Kevin Rudd’s government, Marles spearheaded a proposal for a fund that will allocate A$15 billion to work with the private sector to identify investments in medical devices, pharmaceuticals and manufacturing to boost the economy.

Marles made headlines during the campaign when ex-prime minister Scott Morrison called him a “Manchurian candidate” in relation to a speech he made at the Beijing Foreign Studies University in 2019 where he called for Australia and China to build ties. Morrison later withdrew that comment.

A trained lawyer, Wong was the shadow foreign minister though she has held cabinet positions in past Labor governments and remains the only Asian woman to rise up the ranks. She said Albanese will continue the alliance with Washington and a security arrangement with US and UK that involves Australia obtaining the technology to build nuclear-powered submarines.

With her experience as the country’s first minister for climate change in then-prime minister Kevin Rudd’s cabinet, she wants to bring initiatives to slow global warming into Australia’s diplomacy efforts in Southeast Asia and the Pacific islands. Wong has criticized Morrison for neglecting such “drivers of statecraft”, including development assistance, which she says has played a role in the Solomon Islands signing a security agreement with China.

Wong has said a Labor government would not take “a backward step” on positions that cause Beijing concern such as Australia’s right to determine who builds its 5G network, human rights under the UN charter and its own foreign interference laws. While the door is open to mending ties with China, Wong has said it was up to Beijing to make the changes, particularly on lifting trade sanctions against Australia and complying an with international court ruling on the South China Sea.

Chalmers takes up his first cabinet position as treasurer and prior to that he was shadow minister in a number of portfolios. His PhD thesis titled the “Brawler Statesman” focused on former Labor prime minister Paul Keating and how his dominant leadership led to his election defeat.

He used his own experience in advising Rudd and then the Julia Gillard governments to write “Glory Daze: How a World-Beating Nation Got So Down On Itself,” which critics said was a defense of Labor’s economic policies that included carbon reduction and a national disability scheme.

Chalmers said he will face “the trickiest economic conditions inherited by an incoming government since World War II” with inflation and interest rates rising at a faster clip than wages along with a large budget deficit and high national debt. Labor’s plan is to boost the economy without adding to inflationary pressures while pushing real wages though no details were given, he said.

Gallagher will take up her first national cabinet position as finance minister,  focused on government expenditure and management. She comes to job with the past experience of being chief minister of the Australian Capital Territory for five years and working as the shadow finance minister right up to the election.

She drew last-minute support from Julia Gillard, a close friend who rarely makes endorsements since leaving politics, as it was a keen contest with independents and the Greens for the ACT senate seat that Gallagher was defending. She later won.

The Labor government will boost spending with its policies to boost the production, which would add A$7.4 billion to the budget deficit over four years. Gallagher will look to rein in debt heading to A$1 trillion with plans to crack down on multinational tax avoidance and cut spending on government consultants and contractors.