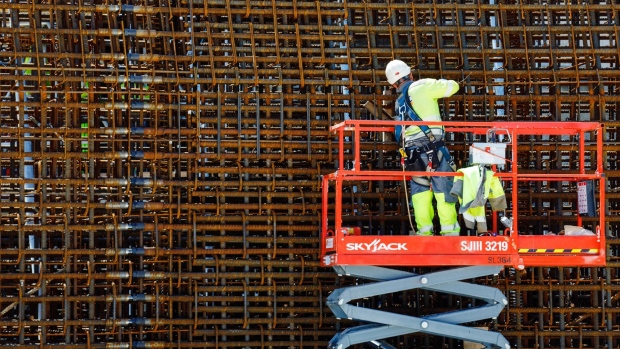 It’ll take 50 million hours of work to transform the site, that’s the size of 245 soccer fields, into a power station big enough to generate electricity for six million homes by 2025.

The project in southwest England will use 208,000 tons of steel reinforcement, that’s enough to lay railway tracks from London to Rome. The engineers use tablets to consult 3D models rather than relying on traditional paper drawings. EDF hired gaming experts to help with the design process, reminiscent of the computer game Minecraft, said Sarah Williamson, technical director for the project.

The rectangle swimming pool shape known as the “core catcher” is a safety feature designed to prevent a Fukushima-type disaster happening. The reactor buildings at the Japanese plant flooded in 2011, causing a nuclear meltdown and radiation to be released into the atmosphere. In the event of a crisis, a computer command will start a process to melt the nuclear core funneling the liquid into the pool where it’s mixed with concrete, that sets and then can’t escape into the atmosphere. The reactor would be destroyed but the surrounding area kept safe.

“There were times when I wondered if we’d ever get out of that hole in the ground,” he said. Large areas of the site descend well below sea level for safety and seismic stability.

The prefabrication bunker is where EDF is making the steel liners tha’ll encase the reactor building. The plan is to make huge 50-meter-wide pieces that can then be lifted out and moved into position by the world’s biggest crane - “Big Carl”. The project will use 50,000 tons of structural steel, enough for five London Eyes.

EDF’s relationship with partner China General Nuclear Power Corp. has come under scrutiny as diplomatic relations between Britain and China have soured. CGN has a 33% stake in Hinkley and is involved in the planning for the next U.K. reactor project Sizewell C.

CGN has 30 workers on site at Hinkley but none of them are allowed to work on the nuclear part of the project. To comply with US export control law, EDF took precautionary steps to restrict emails between the project and China.

EDF is using a huge tunnel boring machine called Mary to dig out to sea to lay a 3 kilometer (1.8 miles) pipeline to let water in to the turbine hall for cooling. The pipes will be capable of filling an Olympic-sized swimming pool in 20 seconds.

There have been 12 cases of coronavirus at Hinkley Point C. To try to limit the spread, EDF has temperature checks on arrival, social distancing on buses and canteens, reduced the density of workers on site and has a rapid testing facility. Buses that holiday-makers in Cornwall weren’t using have been hired by EDF to carry workers to and from the project while its fleet is fitted with protective screens.