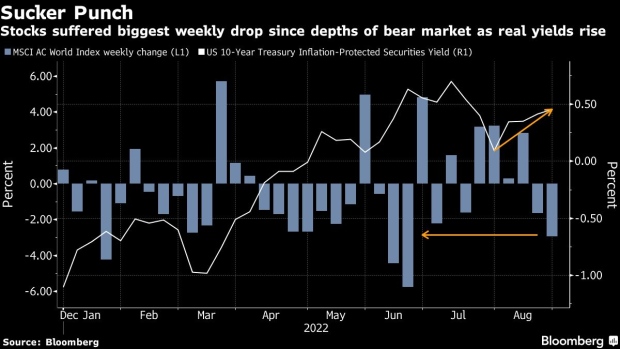 Jerome Powell, chairman of the U.S. Federal Reserve, leaves the reception dinner at the Jackson Hole economic symposium in Moran, Wyoming, US, on Thursday, Aug. 25, 2022. Federal Reserve officials stressed the need to keep raising interest rates even as they reserved judgment on how big they should go at their meeting next month. , Bloomberg

(Bloomberg) -- The dog days of summer are firmly over as global investors absorb Federal Reserve Chair Jerome Powell’s stern message that interest rates are going higher for longer in a painful fight against inflation.

With further catalysts for volatility ahead -- from the shutting of the key Nord Stream gas pipeline to Europe for maintenance to a ramp up of the Fed’s balance sheet rundown to crucial US labor data -- caution is high after Friday’s post-Jackson Hole stock slide. That was sparked by Powell’s rebuttal of the notion that the trajectory of monetary tightening could soon be tempered.

The slump further shriveled a global bounce in shares from June bear-market lows that was predicated partly on bets of a Fed shift to rate cuts next year as growth slows. Powell spelled out the need for sustained restrictive policy, comments that lifted the two-year Treasury yield and sent investors scurrying to the dollar as a shelter from volatility.

Powell was “really hawkish” at Jackson Hole, said Manish Bhargava, a Straits Investment Holdings fund manager in Singapore. There’ll be a “lot of red on Monday” in a fizzling summer rally as money exits emerging markets, he said.

Traders braced for a poor start to the week. US equity futures slid along with Asian stocks on Monday and the two-year Treasury yield reached the highest since 2007. Fizzling risk appetite was evident in Bitcoin, which slumped through the closely-watched $20,000 level.

Powell’s comments are a further boost for the dollar, Westpac Banking Corp. and Bank of Singapore analysts said. The latter’s chief economist Mansoor Mohi-uddin said that’s both as a safe haven and higher-yielding carry trade versus lower yielding Group-of-10 currencies like the euro, pound and yen.

“Dollar-yen is the most obvious way to play for an increasingly determined Fed, with 140 likely to give way before the September FOMC meeting,” said Sean Callow, Westpac’s senior currency strategist.

The dollar is up over 10% this year while the yen’s 16% retreat leaves it at the bottom of the G-10, a schism reflecting the Bank of Japan’s continuing easy-money stance that Governor Haruhiko Kuroda reaffirmed at Jackson Hole.

But the prevailing message from the symposium was that borrowing costs are going up from the US to Europe to Asia. Officials are combating some of the highest inflation in a generation, stoked by damage to supply chains for energy and components due to Russia’s war in Ukraine and Covid curbs in China.

Investors now see the Fed’s policy rate peaking in March at around 3.80% and pared bets on a decline in 2023. The US yield curve between the five and 30-year maturities inverted for the second time this month, while the gap between the higher two-year yield and the 10-year rate widened.

The inversions suggest the bond market anticipates a recession is the necessary sacrifice to get price pressures back under control.

Jackson Hole overshadowed other developments, including a preliminary deal between Beijing and Washington to allow American officials to review audit documents of Chinese firms that trade in the US. That’s a first step toward averting the delisting of about 200 Chinese companies from US exchanges.

Equity futures for Hong Kong were steady and a gauge of US-listed Chinese shares bucked the worst of the wider Wall Street selloff on Friday.

The bigger picture, however, is the Fed’s goal of tightening financial conditions in the world’s largest economy until inflation is visibly defeated. Incoming data on employment and consumer prices will be crucial to gauging progress.

“The game of assessing the Fed outlook has shifted from guessing how high the peak rate might be to also understanding how long it might stay there for,” said Yanxi Tan, FX strategist at Malayan Banking Bhd. in Singapore.