McCreath: Safer bet to gamble in Las Vegas than invest in meme stocks

Trying to keep up with the frenzied rise of so-called meme stocks might feel a bit like playing a game of whack-a-mole, bewildering analysts and investors alike.

While there’s no steadfast definition of what constitutes a meme stock, one common thread across the many names being pitched on social media is a focus on heavily shorted companies. Shares of Reddit icon GameStop Corp. jumped as much as 2,500 per cent in January after day traders noticed its short interest had ballooned to record levels.

Investors looking for other stocks that might fit that mold will find nearly 230 firms with a market capitalization of at least US$100 million and short interest of 15 per cent or more, according to S3 Partners data compiled by Bloomberg. More than 80 per cent of those names have managed positive returns over the last month with the average gain sitting at about 18 per cent, while the S&P 500 Index rose 2.3 per cent. 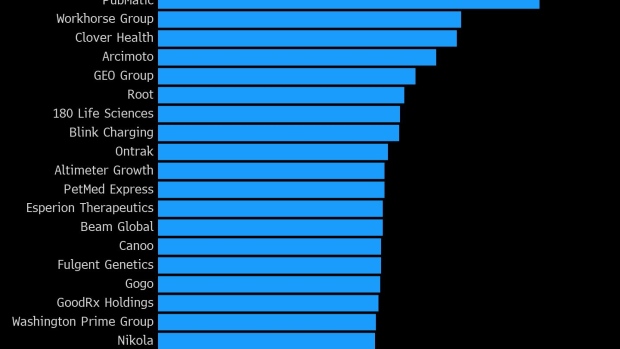 Among the most heavily shorted stocks are names like Clover Health Investments Corp., Workhorse Group Inc. and Geo Group Inc., which have already caught the attention of retail traders in recent days.

Meanwhile, Bumble Inc. and Petco Health and Wellness Co., both fresh off initial public offerings this year, find themselves on the outside looking in as part of the few companies on the list that haven’t seen outsized gains over the last month. Joining them is ad-tech firm PubMatic Inc., which boasts the highest short interest at 54 per cent, recreational boat retailer MarineMax Inc. and biotech company Black Diamond Therapeutics Inc., which has plunged more than 50 per cent over the last month. 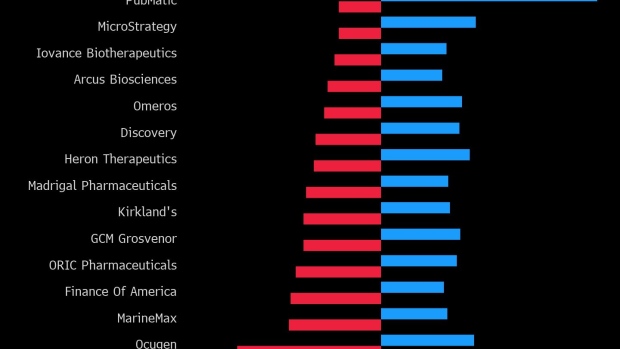 While these sudden rallies can create lucrative returns for investors in the blink of an eye, the extreme volatility that accompanies them can quickly catch traders offside, leaving them holding the bag as shares plunge back to earth.

After opening the week with a 32 per cent gain, Clover Health’s shares jumped by as much as 142 per cent over the next two days. But, by the close of trading Thursday, anyone who had bought and held shares after Monday’s pop was now underwater. 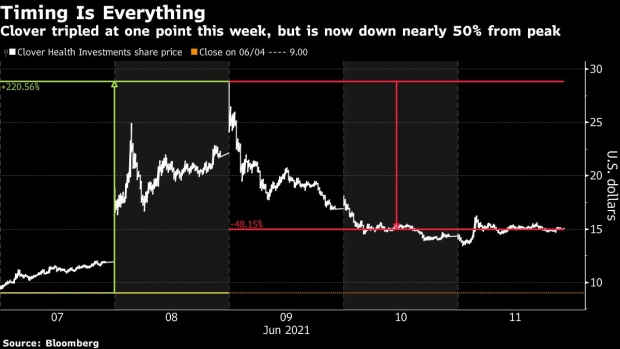 “I can’t imagine this is going to continue in the same form or fashion for much longer,” said Barry Schwartz, chief investment officer at Baskin Wealth Management. “Just because something is shorted doesn’t mean buying it is going to work out for you,” he added. “You’re playing with fire.”