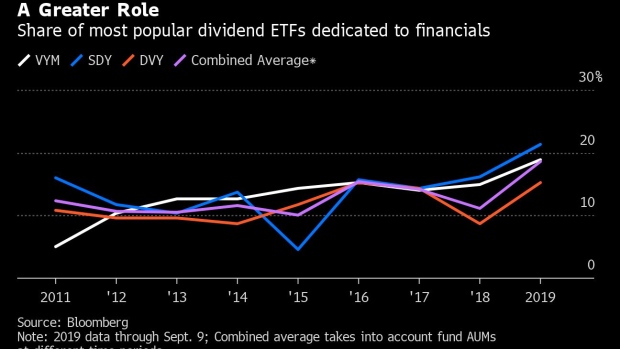 (Bloomberg) -- There’s a misunderstanding at the heart of some of this year’s most popular and hated trades within the $4 trillion market for exchange-traded funds.

All year long, investors searching for income have driven outsized demand for sector ETFs seen as bond proxies, while smart-beta funds focused on dividends are on track for their best year since 2015. Meanwhile, ETFs tracking financial companies are set for their worst year on record. So it might come as a surprise that those same unloved bank and insurance stocks dominate the portfolios of those beloved dividend funds.

Blame a global swoon in bond yields and confusion over where investors can find income in 2019. The banking industry looks very different now than it did before the global credit crisis a decade ago, yet many investors still see it as little more than a bet on rising rates. These days financials offer the highest cash-return yield of any sector, and ETFs are lapping them up.

Financials are “mistakenly painted as a play on the yield curve,” Savita Subramanian, head of U.S. equity and quantitative strategy at Bank of America Merrill Lynch, told Bloomberg Television last week. “What it is today is really more just high quality and dividend yields.”

The industry looks very different than it did before the global financial crisis, in part because it offers the highest cash return yield of any other sector. “That’s a little known fact,” she said.

To dividend-focused ETFs, though, it’s a well-known phenomenon that’s led to a pickup in financials holdings. The sector is the largest allocation for the two most-popular income funds -- the $25 billion Vanguard High Dividend Yield ETF and the $19 billion SPDR S&P Dividend ETF -- while the three biggest dividend ETFs together invest more than $11 billion in financials, the most since at least 2010, data compiled by Bloomberg show.

U.S. 10-year Treasury yields have dropped roughly 100 basis points since the start of 2019, the most for any year since 2011. Sliding rates and an inverted yield curve have weighed on financial stocks, pressuring net-interest margins. Yet Bank of America remains overweight the industry.

As of Monday, 60% of financial stocks offered dividend yields greater than those of 10-year Treasuries, according to Dennis Debusschere, head of portfolio strategy at Evercore ISI.

“Historically, forward returns to financials have been stronger than normal when that has been the case,” he wrote in a note to clients, outlining that they’ve outperformed on a one-, three-, and six-month basis in the past.

Banks and insurance stocks make up 19% of the Vanguard High Dividend Yield ETF, which trades under the ticker VYM. That’s more than triple the amount at the end of 2010, as far back as a Bloomberg portfolio analysis goes. Financials make up more than a fifth of the SPDR S&P Dividend ETF (SDY) and 15% of the third-largest dividend ETF, the $18 billion iShares Select Dividend ETF (DVY).

In aggregate, smart-beta funds that focus on dividends and yield have taken in more money this year than every other factor cohort, except for low volatility. Amid gyrations in the bond market, investors are looking to safer corners of the stock market.

“People are looking for yield anywhere they can get it,” and with volatility creeping into the bond market, investors are turning to stable stocks, said JJ Kinahan, chief market strategist at TD Ameritrade. “If you’re a long-term investor, right now, that’s something that may make sense until you get some clarity from what is going on with interest rates.”

--With assistance from Jonathan Ferro.

To contact the editors responsible for this story: Jeremy Herron at jherron8@bloomberg.net, Rita Nazareth, Rachel Evans