The Federal Reserve’s fingerprints are all over the bond exchange-traded fund market.

Just a month after the Fed’s buying kicked off, cash is flooding into fixed-income ETFs at a record pace and demand to bet against both high-grade and junk funds has dissolved. Meanwhile, the Fed’s steady purchases have coaxed the price of its chosen ETFs back into alignment with their net-asset values, after those ETFs posted unprecedented dislocations during the height of March’s coronavirus-fueled credit crunch.

The degree to which the fixed-income ETF landscape has stabilized is just another example of how powerful the Fed’s interventions have been in soothing — and stoking — financial markets. That dynamic was on display once again Monday, when the central bank’s announcement that it would finally begin purchasing individual bonds boosted BlackRock’s iShares iBoxx $ Investment Grade Corporate Bond ETF, ticker LQD, to an all-time high. The Fed’s inclusion of bond ETFs in its pandemic response ultimately served as an endorsements of sorts for a segment of the market that’s struggled to make up ground on its equity peers. 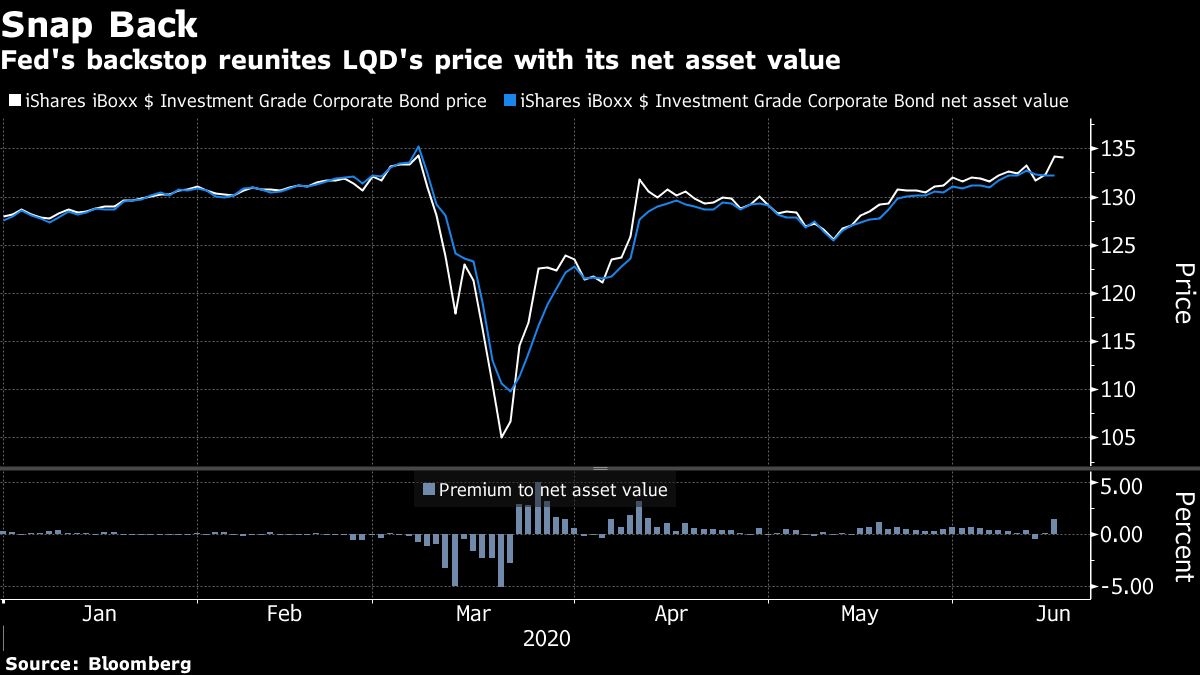 The central bank’s pledge rearranged 2020’s leaderboard for ETF flows. Fixed-income ETFs have absorbed roughly US$78 billion so far in 2020, with corporate-bond ETFs accounting for roughly US$42 billion of those inflows, according to data compiled by Bloomberg. The rush into bond funds is outpacing inflows into equity ETFs, which total US$53 billion year-to-date. It’s a remarkable shift, given that equity ETFs — which hold US$3.2 trillion in assets — dwarf fixed-income funds, which hold US$944 billion.

The newfound interest in fixed-income ETFs is a consequence of the Fed’s purchases, which enticed a new class of investors into the ETF market, according to State Street Corp.’s Rory Tobin.

“There is a increased interest from a lot of investors, particularly dedicated fixed-income investors, who wouldn’t necessarily have been thinking about fixed-income ETFs three months ago, six months ago, given that ETFs are an equity instrument that trade on equity pipes and plumbing,” said Tobin, global head of State Street’s SPDR ETF business. “But we’ve certainly started to see doors being opened, conversations being started with entities that might not have been very ETF-friendly in the past.” 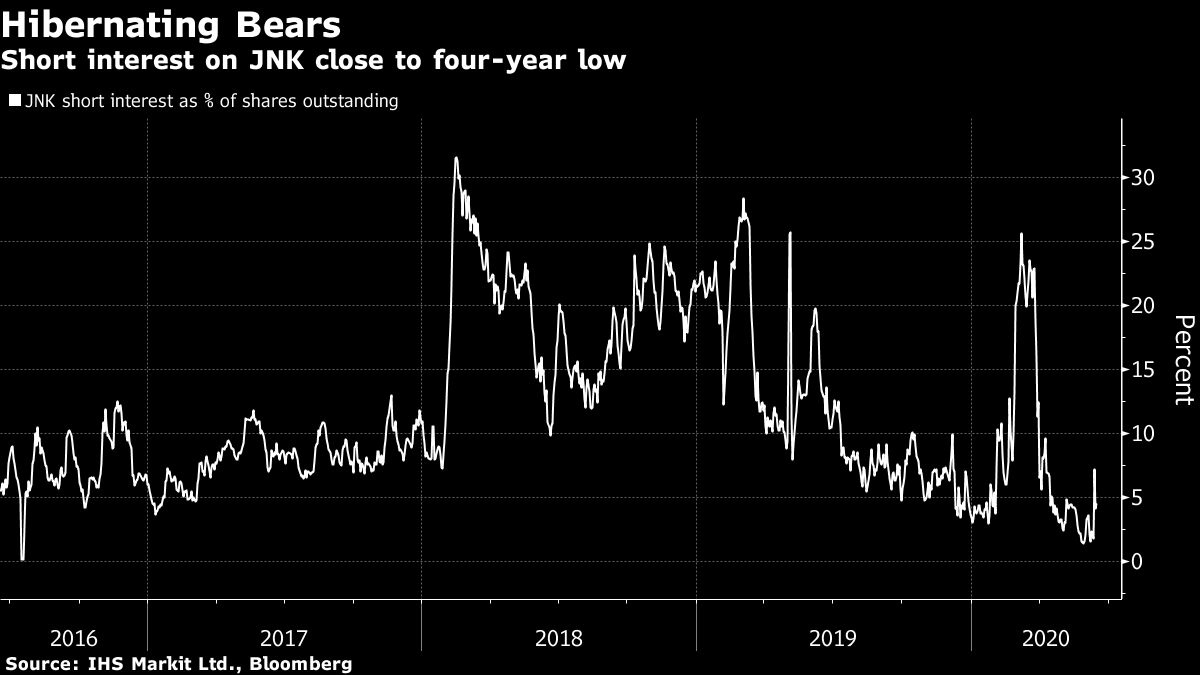 Bearish wagers against both investment-grade and high-yield ETFs have shriveled in the wake of the Fed’s backstop. Short interest as a percentage of shares outstanding in LQD — which has absorbed the bulk of the Fed’s buying — is just 2.3 per cent, after surging to an all-time high of 17.6 per cent in March, according to data from IHS Markit Ltd. For the SPDR Bloomberg Barclays High Yield Bond ETF, ticker JNK, short bets are hovering near a four-year low.

While the Fed’s support has been “invaluable” in staving off defaults, investors shouldn’t give a blanket all-clear to the entire asset class, cautions Principal Global Investors.

“Even with Fed help, a bad credit is still a bad credit, and that underlying weakness will inevitably show through when Fed support is removed,” said Seema Shah, the firm’s chief strategist. “So caution is still warranted, and high quality is still preferred.”

One of the Fed’s most masterful feats in quelling market distress was in reuniting bond ETF prices with the value of the funds’ underlying assets. As trading froze in cash bond markets in March, funds such as LQD and the Vanguard Intermediate-Term Corporate Bond ETF plunged to steep discounts to their net-asset values as investors shed holdings in the more-liquid ETFs. Those discounts quickly switched to premiums after the Fed announced in late March that would purchase ETFs in late March, as the funds rallied more quickly than the securities that they track.

Now, three months later, prices on bond ETFs are largely back in lockstep with their holdings. Without the Fed’s intervention, the two likely would have met -- but only after the underlying credit markets dropped steeply, said Dan Suzuki of Richard Bernstein Advisors.

“If the Fed had not stepped in, who knows how bad it would have gotten in markets and in the overall economy,” said Suzuki, the firm’s deputy chief investment officer. “Had that continued, the NAVs would have probably dropped dramatically to meet the ETF prices which probably would have gone down further had the Fed not stepped in.”

The Fed has purchased US$5.5 billion worth of bond ETFs through June 9, a fraction of the facility’s US$250-billion capacity. With both bond ETFs and the credit market largely back to business as usual — companies are issuing debt at a record clip — questions have emerged about how long the Fed’s purchases will last. The central bank said Monday that it could pause buying once market conditions return to pre-pandemic levels, with the option to resume if the situation worsens.

In the eyes of Miller Tabak’s Matt Maley, the eventual tapering of support could disrupt markets.

“When the Fed buys ETFs they are totally insensitive to price, that’s dangerous,” said Maley, chief market strategist. “When a large price insensitive buyer leaves any market, it leaves it very vulnerable.”