With the delta variant surging throughout the U.S., Biden administration chief medical adviser Anthony Fauci has advocated for more testing — including for the vaccinated.  More testing is essential, but how we test is important, too.

The U.S. is testing fewer people than it did in previous COVID waves, and this is a problem. The now-dominant delta variant spreads so quickly that every missed opportunity to catch an infectious person can lead to many more new cases. In ideal conditions, a person who was sick with the original strain would infect about three others on average. With delta, it’s around seven. To this point, highly reliable PCR tests have been the backbone of U.S. screening. They’re not ideal for controlling outbreaks, though, because results can take days to arrive. Rapid antigen tests, which can deliver results in less than 15 minutes, have been discounted by some because they are a less accurate alternative, but they are very good at identifying when people are infectious. For this reason, they should be given a bigger role as a delta-fighting tool. 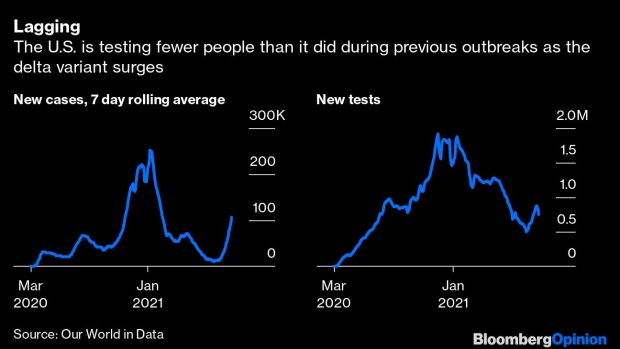 Who should get tested? When it comes to delta, it’s important to cast the widest net possible. Vaccines remain highly protective, particularly against severe disease and death. But no shot is perfect, and fully vaccinated people may still be able to transmit the virus to others. This fact alone warrants continued broad screening. Fauci didn’t specify what kind of testing he had in mind, only that screening for the vaccinated should expand beyond symptomatic people and those who have been in close contact with an infected person. But rapid antigen testing makes the most sense in an increasingly inoculated population.

The technology is a better fit for the vaccinated because, if infected, they are likely to be contagious for a shorter time. If there’s a particularly small window of infectiousness, then fast results are crucial to finding and isolating the people most likely to spread the virus.

True, PCR testing is better at picking up an infection, but it is also more likely to identify it at the wrong time. Finding an infectious person several days after a test does little good if that individual spends the intervening period interacting with other people. Plus, the tests can yield positive results long after an individual is contagious, setting in motion unnecessary quarantine protocols. PCR tests can cost as much as US$100, which is substantially more expensive than rapid antigen tests. A widely available at-home rapid test from Abbott Laboratories costs US$20 to US$24 for a pack of two, and that’s the consumer price. It’s cheaper in bulk for schools and governments. That makes rapid tests easier to do repeatedly, which can boost accuracy.

It can be tough to persuade vaccinated people who feel that they've already done their part to keep taking precautions. (Just look at the resistance to renewed mask mandates.) The best way to get them on board is to make sure the rules make sense and easy to follow. This means the moment for the rapid antigen test has arrived.