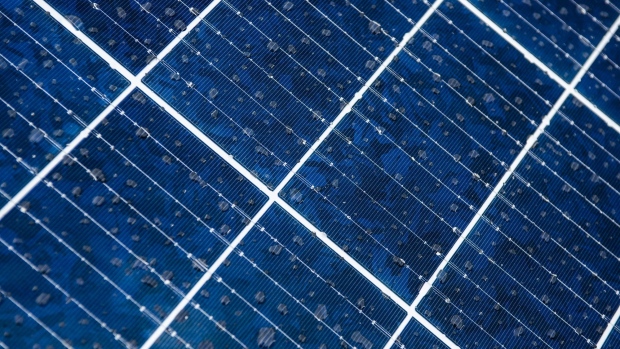 Rain droplets cover solar panels installed on the roof of a residential property in Johannesburg, South Africa, on Friday, Mar. 13, 2020. The coronavirus lockdown will cause the biggest drop in energy demand in history, with only renewables managing to increase output through the crisis. Photographer: Waldo Swiegers/Bloomberg , Bloomberg

Tongwei Co. halted output at a polysilicon factory in southwestern Sichuan province because of flooding, the latest blow to the solar supply chain that has seen rare cost increases this summer due to disruptions.

Tongwei, the world’s No. 3 polysilicon producer last year, said it isn’t clear when production will resume, and didn’t say whether its plant sustained damage. The facility can produce 20,000 tons of polysilicon a year, which would be about 4% of global production last year, according to data compiled by BloombergNEF.

The move could further pinch the solar supply chain, which is in the midst of a rare period of rising costs after a July 19 explosion at a polysilicon plant in Xinjiang cut global supply of the material used as the building block for solar power globally.

“A short-term price rise driven by this event is possible,” said Yali Jiang, an analyst with BloombergNEF. “But further price rise may lead to project delays considering the already high upstream prices.”

Prices for the material have surged by 56% since July 15, according to PVInsights. Wafer and cell makers have since boosted prices to pass along some of the increased cost. Any further impact on prices may depend on the duration of the outage.

China has been battered by severe floods since June, affecting more than 63 million people, according to a posting on the Ministry of Emergency Management’s website.