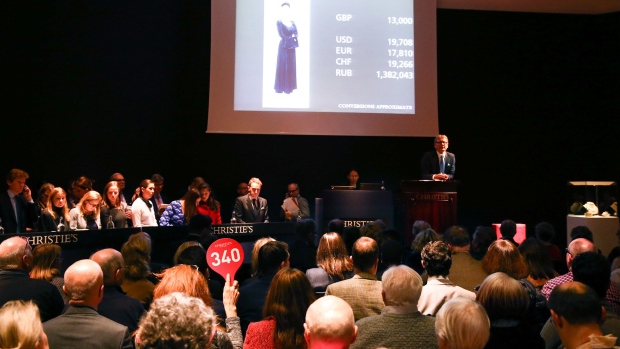 (Bloomberg) -- Josh Baer, the author of the art industry newsletter, the Baer Faxt, has spent the past 25 years jotting down who bought what at auction, and who tried to buy art but was outbid.

“As an adviser or dealer, that information is key,” says Baer, who also works as a dealer and adviser. “And all of this data is something I published in the Baer Faxt.”

Now, he’s turned those entries into a searchable database.

Users of his newly christened Baer Faxt Auction Database can pay from $200 to $500 a month to search about 10,000 past auction lots, which contain information about roughly 5,700 sales where the buyer is listed and about 6,100 entries of underbidders (the word for people who wanted the work but failed to get it).

“This is not trying to tell you what to buy,” Baer says. “It’s human intel, organized for professionals and serious collectors to use in a functional way.”

On the face of it, the database is inside baseball for an already inside crowd. How many people could possibly care who the underbidder was for Balthus’s 1939 Etude pour Portrait de Thérèse in 2005? (That would be the Geneva dealer Marc Blondeau, for anyone counting.)

But in digitizing a quarter-century of records, Baer has built a powerful tool for sifting data that was once the exclusive purview of dealers, advisers, and auction houses. Suddenly, anyone with $200 for a subscription can find the owner—or at least, the owner’s representative—of some of the most famous artworks on the planet. Just as important, the underbidder data articulates who would like to buy one of these artworks but perhaps hasn’t yet, thereby representing a potentially lucrative sales opportunity.

“We’re constantly monitoring who’s buying and who’s underbidding,” says Abigail Asher, the co-founder of the advisory Guggenheim, Asher, Associates, whose first appearance in Baer’s database dates to 1997. “It’s part of an overall understanding of the marketplace.”

From a consumer perspective, there are other uses, too.

Imagine that you’re a new collector interested in buying a work by Rachel Whiteread. On a basic level, you could use the database to figure out who participates in her secondary market: If a dealer or advisor is buying many of the Whitereads that come to auction, that could be a sign that they’ve got access to works you could choose among.

Or if you’re interested in cutting out the intermediary, you could look at the private collectors who’ve bought specific Whitereads over the years and contact them directly. A collector might be willing to sell for the right price.

“If the question is how useful is it for someone coming into the art world—or who doesn’t really go to auctions but wants to know who the players are—I think it’s very useful,” says the dealer Christophe Van de Weghe, who makes 184 appearances in Baer’s database.

The idea for a searchable database originated, Baer says, a few years ago on the suggestion of his art lawyer, Tom Danziger.

By the time Glenn Fuhrman’s family office, Virtru Investment Partners and LionTree Partners, acquired a minority stake in the Baer Faxt in October 2020, “they knew it was a product I had in mind to produce, and it was part of the valuation of the company for that transaction,” Baer continues. (He declines to confirm the monetary value of the stake.)

Part of the database’s value is its proven veracity: Baer has been circulating his findings to the very people he reports on. “If it wasn’t accurate, they contacted me,” he says.

It’s a database, in other words, that’s effectively fact checked by peer review. In fact, Bloomberg spot-checked the database by calling multiple dealers and advisers, all of whom confirmed the entries in which they were listed.

But the database’s strength—namely that nearly every entry was verified by Baer himself—is also its weakness. He could only be in so many places at once, and his focus was on a specific subset of auctions.

“I’d say the majority of the entries were from evening sales in New York and London’s contemporary, postwar, Impressionist, and modern categories,” Baer says. The rest is from lower-priced day sales in the same categories.

There isn’t, in other words, a profusion of data for anyone hoping to break into the old master market. Nor will a collector interested in the antique porcelain market find much to work with. And of course, Baer isn’t omniscient: Many buyers at auction choose to remain anonymous, which means his entries are heavily weighted toward the dealers and art advisers who bid publicly.

A further issue is that the data appear to be thinner from 2018 to 2019. (The Covid-19 pandemic then put a stop to reporting.) This is an anecdotal impression based on a few days of poking around the database, but it’s a characterization that Baer says is “probably not wrong” and could be “a function of all the other things [he was] doing.”

Given the rapid churn of the art market, up-to-date, global data are arguably critical to the database’s ongoing relevance. “Information can change,” Van de Weghe says, “people who were buying art 20 years ago are tapped out.”

This doesn’t escape Baer, who says he plans to “lean hard” into covering the Asian art market, as well as train people in London and New York to help him add 500 pieces of new information to the database every year.

In the meantime, Baer says he’s focused on the roughly 2,000 to 3,000 people around the world he considers obvious subscribers.

“We’ll see how many of these people I can reach,” he says. “That’s a bet I made by spending money to build this and putting my reputation on the line.”