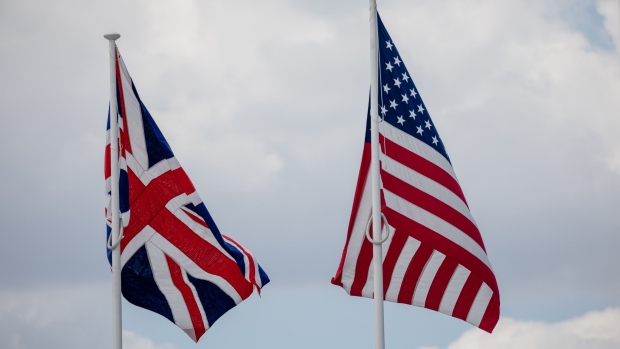 A British Union flag, also known as the Union Jack, left, flies beside a U.S. national flag during the North Atlantic Treaty Organization (NATO) summit at the military and political alliance's headquarters in Brussels, Belgium, on Wednesday, July 11, 2018. President Donald Trump opened up another front in his tussle with allies on his arrival at NATO’s annual summit, targeting Germany over its support for the Nord Stream 2 gas pipeline from Russia. Photographer: Marlene Awaad/Bloomberg , Bloomberg

While Brexit drove most London equities trading to platforms in Amsterdam, Frankfurt and Paris, some has migrated to New York’s OTC Markets Group, known primarily for owning the “pink sheets” where thousands of speculative U.S. stocks are bought and sold.

Average daily trading in European Union companies on the platform increased 27% in January and 25% in February compared to December, according to OTC Markets. The jump has accompanied rising volumes from the frenzy in retail trading during the pandemic.

“We’ve been the unexpected beneficiary” of Brexit, says Jason Paltrowitz, director of OTC Markets Group International Ltd. “We’re getting a look where we might not have gotten it before.”

The increase in trading volumes in New York is another sign that Brexit is driving some business away from Europe entirely. New York-based derivatives trading venues have gained following Brexit from the EU’s decision to bar its banks from trading certain contracts on London platforms.

Even before Brexit, the OTC Markets platform was used to trade shares in foreign companies, such as Siemens AG, BNP Paribas SA and EssilorLuxottica SA. They can have their shares “cross traded” on the platform without going through the rigorous process of going public in the U.S. and meeting the Securities and Exchange Commisssion’s disclosure requirements.

OTC Markets is trying to entice more foreign companies, arguing that it’s an easier way for foreign firms to attract U.S. investors who can trade the shares during U.S. hours and in U.S. dollars.

“We’re taking that data and absolutely using it as a springboard to increase our outreach to companies both in the U.K. and more broadly in western Europe,” Paltrowitz said.