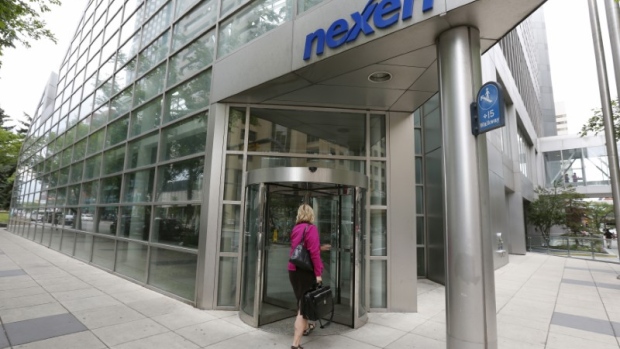 It just got even harder to argue allowing a Chinese state-owned enterprise to purchase one of Canada’s largest energy companies was a “net benefit” to this country.

Nexen pulled the plug on Aurora LNG Thursday. Alongside partner Inpex, it was a $20-billion plan to export liquefied natural gas from the British Columbia coast. The Calgary-based company, which was purchased in 2012 by Beijing-based China National Offshore Oil Corporation (CNOOC) in a $15-billion deal representing China’s largest-ever foreign takeover at the time, was following an unfortunate trend after plans for the $36-billion Pacific Northwest LNG megaproject was abandoned in July.

“Nexen and their partners were very clear when they contacted us,” British Columbia Energy Minister Michelle Mungall told BNN in a statement. “This decision is based entirely on global market conditions and prevailing low commodity prices.”

Commodity prices, specifically the value of LNG in Asia, have indeed been decimated since late 2013 when the project was first proposed. Yet for Canadians who were convinced the benefits of selling Nexen to an arms-length branch of the Chinese government would outweigh the costs, the decision is the latest in a long list of disappointments.

“This is just a parade of broken promises right from the start,” Jeff Hull, senior financial advisor for Manulife Securities, told BNN on Friday morning. “It’s just a disappointment overall.”

CNOOC made several promises in order to secure government approval and shore up public support of its Nexen takeover. The company pledged to replace the lost liquidity that would result from removing Nexen from the Toronto Stock Exchange by launching its own TSX listing. Nexen’s senior Canadian managers were supposed to keep their jobs. Capital spending would more than double as Calgary became the global energy giant’s North American headquarters. And, through it all, CNOOC repeatedly pledged to maintain “an adherence to the highest standards of safety and regulatory compliance.” 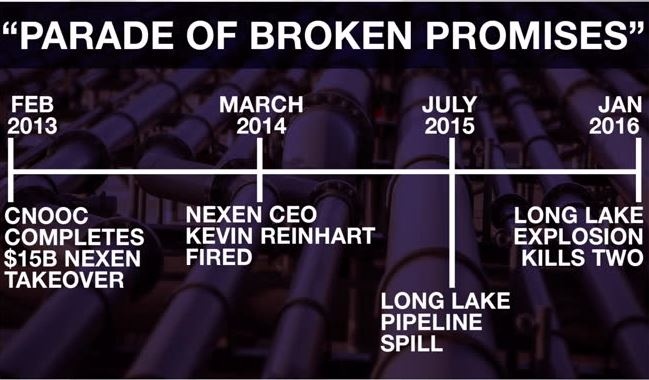 On every one of those points, industry observers say the company has failed to meet the expectations CNOOC had set. Yet in response to emailed questions from BNN, the company said it “is and continues to be in compliance with our Investment Canada undertakings.”

Less than a year after the deal closed, Nexen’s Chinese parent company fired its Canadian CEO – Kevin Reinhart – even though the Chinese executive tapped to replace him had yet to receive a Canadian work permit.

When CNOOC debuted on the Toronto Stock Exchange on September 18th 2013, just 900 shares traded, which Dirk Lever of AltaCorp bluntly deemed a “joke.” When Nexen was still traded on the TSX, by comparison, roughly four million shares were bought and sold every day. The average trading volume of CNOOC shares on the TSX (ticker CNU) has since fallen to just 29 shares per day.

Then there is the company’s commitment to the highest standards of safety and regulatory compliance.

In 2014, CNOOC installed a new pipeline at Nexen’s Long Lake oil sands facility in northern Alberta. Less than a year after installation and startup, the pipeline spilled more than 31,000 barrels of emulsion – a mixture of bitumen, water and sand – into the surrounding muskeg in what remains the largest such spill in Alberta history.

The spill went undetected for nearly a month until a maintenance worker happened upon the breach. In July of this year, the Alberta Energy Regulator formally laid five charges against Nexen for, among other things, failing to promptly report the spill and failing to take even basic measures to remediate and manage the release. Its first court appearance on the charges took place in Fort McMurray last month.

Meanwhile, two Long Lake workers were killed in January 2016 following an explosion at the facility’s upgrader. Provincial authorities are continuing to investigate CNOOC’s role in the circumstances that led to the fatalities. The Long Lake upgrader, arguably Nexen’s most valuable asset, has been sitting idle ever since.

CNOOC is far from the only company that has been forced to cancel plans put in place when crude oil prices were still in triple-digit territory. However, the conditions it agreed to follow when it was allowed to purchase Nexen were not seen as contingent on prices staying high.

“It is obvious that CNOOC lost its argument for having complied with Ottawa’s conditions,” Duanjie Chen, a research fellow at the University of Calgary School of Public Policy, told BNN in 2015.

“The CNOOC-Nexen case should be and will be forever remembered for its historical lesson [that] no investment originated from any government should be accepted without an extremely tight level of scrutiny.”