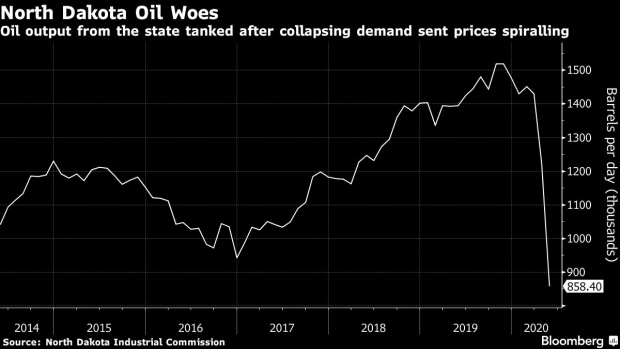 (Bloomberg) -- Earlier this month, a federal judge stunned the U.S. energy sector with an order to shut down the Dakota Access pipeline. Environmentalists hailed it as the first time a fully operating system had been forced to close by a legal challenge.

As it turns out, it was actually the second time an oil pipeline was ordered shut in a matter of four days.

On July 2, a lesser-known conduit called Tesoro High Plains was ordered shut for the first time in its 67 years of operation. Together, the two pipelines ship more than one-third of crude from America’s prolific Bakken shale formation to market. Their travails signal the ebbing of the oil industry’s sway in the U.S. heartland and underscore the growing heft and savvy of challengers who’ve become emboldened to demand higher compensation and safeguards.

“In the past, it was a shotgun approach of challenging pipelines,” said Brandon Barnes, an analyst for Bloomberg Intelligence. “Now, the resources are more plentiful and the challengers are far more nuanced and sophisticated in their approach.”

The stakes are high. If the shutdown of both pipelines proceeds, it would force the region’s drillers to turn to more expensive options to ship their oil -- or shut in production altogether, just as the entire oil industry is reeling from depressed prices that have pushed a steady stream of producers into bankruptcy.

The outlook for the U.S. pipeline industry has perhaps never been more uncertain. Earlier this month, Dominion Energy Inc. and its partner Duke Energy Corp. announced they were no longer moving forward with their $8 billion Atlantic Coast natural gas pipeline after years of delays and ballooning costs. In the ensuing 24 hours, the Supreme Court left in force a lower court order blocking the start of construction on TC Energy Corp’s Keystone XL pipeline, while a district court ordered the shutdown of Dakota Access (although that project scored temporary relief last week).

In the case of High Plains, which delivers oil to Marathon Petroleum Corp.’s 74,000 barrel-a-day Mandan refinery, the U.S. Interior Department’s Bureau of Indian Affairs ordered it shut after determining the pipeline was trespassing on Native American land. The ruling also found the company responsible for $187 million in damages and gave it 30 days to appeal.

The legal right-of-way for High Plains to cross some 90 acres of the Fort Berthold Reservation in North Dakota was first initiated in 1953 and renewed every 20 years -- in 1973 and again 1993 -- according to court documents.

In 2013, Andeavor, the owner of the pipeline at the time, started negotiations for a new right-of-way with the Mandan, Hidatsa and Arikara Nation. Once that was accomplished, the company moved on to discussions about compensation for individual owners whose land is traversed by High Plains. But those talks broke down, according to an October 2018 lawsuit seeking payment and damages from Andeavor and the removal of the pipeline.

The case involves roughly 450 people who own some 65 acres, according to Tex Hall, one of the plaintiffs. About four years ago, Hall said, he and other landowners started receiving letters from Andeavor offering $850 an acre, an amount later increased to $6,000. He said they discovered the company offered a much more favorable agreement to the MHA Nation government.

According to Bureau of Indian Affairs documents, Marathon, which acquired Andeavor in 2018, signed over $53.8 million to the MHA Nation, which owns about 28 acres of affected land, a sum that included trespass damages. According to the lawsuit, that works out at more than $615,000 an acre.

Because it failed to reach an agreement with the individual landowners, Marathon has been trespassing for seven years, according to Reed Soderstrom, an attorney for Pringle & Herigstad, P.C., which is representing the plaintiffs. He said the suit isn’t a rebellion against oil and gas pipelines or producers but a push for individuals to be adequately protected.

That’s echoed by Hall, who’s the president of the Fort Berthold Allottee Land and Mineral Owners Association. He said pipelines are generally the safest way to transport oil and he doesn’t want to ban High Plains, so long as Marathon acts responsibly and negotiates in good faith. “Pay us fair market value,” he said.

“People are now rising up to say, you’re not going to put a pipeline in, without our consent, that’s potentially damaging our drinking water or disingenuous in the way you’re paying us,” Hall said. “You can’t do that anymore.”

Marathon spokesman Jamal Kheiry declined to comment on the operational status of the pipeline and whether the company will appeal the shutdown order. He added that while Marathon doesn’t discuss plans regarding litigation, it respects the rights of the MHA Nation and hopes to “come to an agreement that benefits all parties.”

Whatever happens with High Plains, further uncertainty for pipelines may come with the U.S. presidential election in November. While President Donald Trump has worked to pave the way for both Dakota Access and Keystone XL early in his presidency, presumptive Democratic presidential nominee Joe Biden has vowed to support lower-carbon energy sources.

As more constituents clamor to be heard in the increasingly politicized discussion over what America’s energy landscape will look like, existing and potential projects are likely to become ensnared. As a result, more companies could follow Dominion and Duke and shy away from building new energy infrastructure.

“Operators think they know where the goal post is,” said Kevin Birn, vice president of North American crude oil markets at IHS Markit. “But the goal post ends up moving around on them. As that goal moves, the costs associated escalate and the ultimate return for projects” is less certain.