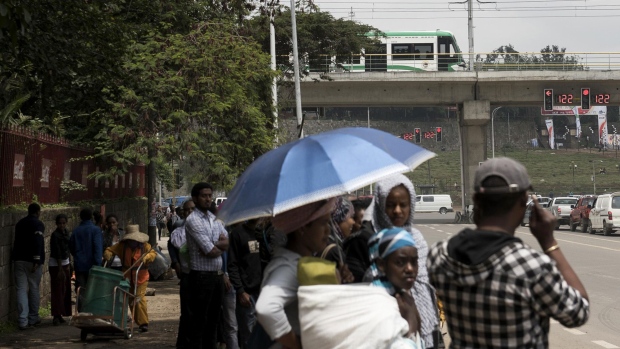 (Bloomberg) -- Kenya’s biggest bank by assets is expecting Ethiopia to open up financial services to foreign investors after liberalizing its telecommunications industry.

KCB Group will seek a full-banking license in the Horn of Africa country if or when it changes regulations to allow the move, Chief Executive Officer Joshua Oigara said in an interview. The lender has a representative office and a digital financial-services partnership in Ethiopia, providing a growth platform, he said.

“We believe that allowing international mobile companies to invest in Ethiopia in the next year is a great opener for financial institutions as well,” Oigara said in the capital, Nairobi. “We’re just prepared, so we look forward to that opportunity.”

Ethiopian Prime Minister Abiy Ahmed has put privatization of parts of the largely closed economy at the heart of his reform agenda, in part to raise foreign exchange and boost jobs and growth. The telecommunications sector is the first to be opened up, with the sale of a license to a Safaricom Plc-led consortium last week.

Potential bidders were, however, left disappointed after the provision of mobile-payment services wasn’t included in the terms. Instead, state-owned Ethio Telecom will operate a mobile-money monopoly for about a year.

Ethiopia’s financial industry is tightly controlled by state-run institutions such as Commercial Bank of Ethiopia, which was created more than five decades ago and has 1,600 outlets across the country. There’s been no indication from the government yet that banking will also be liberalized in Ethiopia.

The nation is an attractive market for foreign companies in part due to its population of more than 110 million, the second-largest in Africa. However, the U.S. has announced economic sanctions against Ethiopian officials over a conflict in the northern Tigray region, a move that could affect the ability to invest.

Kenyan lenders are some of the most advanced in digital services, with over 80% of transactions including borrowing done through mobile phones or internet banking. However, the industry’s ability to monetize the service was eroded this year after the central bank stopped charges for mobile payments, a move to discourage people from crowding in banking halls during the Covid-19 pandemic.

KCB’s first-quarter mobile-banking revenues declined 43% to 1.45 billion shillings ($13.5 million) due to fee waivers and lower lending, even as the value of mobile transactions soared 181% to 655 billion shillings.

“I don’t think the fees will come back in my view,” Oigara said.