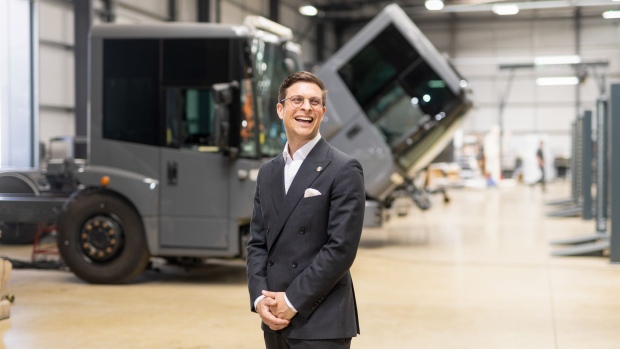 (Bloomberg) -- When car fanatics fret about the inevitable end of the internal combustion engine, they worry that the thrilling roar of a V12 Ferrari will be silenced. What they sometimes forget is that it also means the end of blaring seven-liter garbage truck engines roaring down the street at 5 a.m.

Fortunately, a David Beckham-backed company is working to solve the problem of noisy—not to mention pollutant emitting—engines.

Lunaz was founded in 2018 with the mission of creating  the world’s first electric-powered Rolls-Royce through a process it calls “upcycling.” The famed footballer has a 10% stake in the company.

The founding moment for the company was Prince Harry’s priceless electric Jaguar E-Type, which he drove toward Meghan Markle on their wedding day in 2018. That eye-catching E-Type sparked an idea in Lorenz, leading him to start Lunaz, and bringing him together with Beckham, who wanted his own all-electric classic, like Harry’s. (Beckham has become something of a regular customer; he gave his son Brooklyn a Lunaz-converted 1954 Jaguar XK140 in April as a wedding gift.)

Today, the Lunaz factory in Silverstone, home of the British Grand Prix, is stocked with beautiful classic cars such as Sophia Loren’s Rolls-Royce Cloud, purchased by a high-end hotel in London to shuttle guests in all-electric style, and a 1950s James Young two-door coupe Bentley with an electric conversion price tag of up to to £1 million ($1.21 million).

Lunaz has set its sights higher than shaping accessories for the rich and famous. Beckham apparently “checks in every few weeks,” according to company Chief Executive Officer David Lorenz, a former founder of London’s Cuckoo Club, and is just as focused on Lunaz’s new mission to electrify the world’s garbage trucks. This is the first step in a far-reaching goal to upcycle 80 million diesel-powered industrial vehicles.

Recently, Lunaz expanded its factory into a 200,000-square-foot location that can electrify 1,100 vehicles every year. The new plant will have “dirty” and “clean” sections, says Lorenz, with old garbage trucks coming in and upcycled ones going out. The upgraded trucks, which Lorenz calls the “Bentley of bin lorries,” contain quieter electric motors and batteries, along with such popular tweaks as 360-degree cameras and more comfortable drivers’ seats.

The so-called “dirty” trucks have diesel engines that average only around 3 miles per gallon and have to run constantly for 14 hours a day to power the vehicle’s hydraulic, garbage-crushing mechanisms—even when halted. They’re a big source of particulate pollution on runs through residential areas.

In the UK, the councils that oversee the trucks retire them after 10 years, or when they have clocked as few as 70,000 miles. After that, they are “probably sold abroad and carry on operating,” says Tanguy Tomes, author of “Ditching Diesel,” a report by environment consultancy Eunomia. Lorenz wants to end this practice—which he disparages as “carbon postboxing” whereby richer countries send carbon emissions to poorer countries, rather than taking them entirely off the road.

Lorenz’s longer-term vision is that whenever any industrial diesel-powered vehicle comes to the end of its life, a nearby Lunaz plant will be able to give it an upgrade and keep it on the road, far cleaner.

He says that fixing the UK’s garbage trucks could make a significant dent in the 330,000 tons of carbon dioxide that trucks operated by local authorities emit annually (more than all the combined CO2 emissions in the City of London and Westminster), let alone the CO2 emissions required to build new vehicles. Lunaz EVs are competitively priced, according to Lorenz. A new diesel Mercedes Econic refuse truck costs from £260,000 to £300,000, with electric models going for £400,000 to £450,000. Lunaz says its upcycled model costs from £250,000 to £400,000, depending on the specification.The world’s supply chain problems are also making it harder for UK councils to get new trucks, sweetening the appeal of Lunaz’s trucks. “There’s a 15-month wait time for a diesel Mercedes Econic, let alone an electric one,” Lorenz says.

Lorenz’s dream is to turn his company’s name into a verb, like Xerox or Google. He hopes people will say “let’s Lunaz that vehicle,” and that “UEVs,” or upcycled electric vehicles, will become a standard across the motor vehicle industry.

First, he has to get his electric trucks on the road.  Lorenz says local governments in the UK are “clamoring” to get his trucks ahead of national legislation that requires all new vehicles to qualify for low emissions by 2030. Without sharing specifics, he says the company is about to announce its first deals with local government and waste management operators in the UK and Europe.

Tomes, who spoke to several local councils around the UK for his report—including the City of London, which recently moved to an all-electric fleet—says “there is increasing interest in the 2030 timeline” but that some catching-up is needed.

The UK “hasn’t yet procured anywhere near as much as cities in Brazil and China, which have ordered hundreds of vehicles,” says Tomes. This compares to the 27 trucks that the Manchester City Council recently bought from a Lunaz rival, Electra Commercial Vehicles, for operation by waste management company Biffa. To help attract local government orders for its electric trucks, Lunaz just added Biffa’s former CEO, Ian Wakelin, to its board, along with Andrew Cope, the founder of Zenith, the UK’s largest independent vehicle leasing company.

“There’s a need for the UK public sector to be leading by example,” says Tomes.