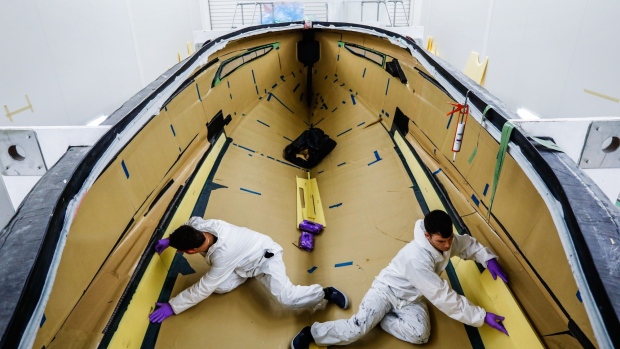 (Bloomberg) -- Antony Sheriff came to Princess yachts three years ago, not long after leaving McLaren Automotive. He expected to bring lessons learned from making supercars to yacht manufacturing, a hidebound business famous for losing money the old-fashioned way—hand over first when times got tough.

With no experience in boatbuilding, executive chairman Sheriff suspected many of the car industry’s cost-cutting strategies developed over the past two decades would transfer neatly. But he soon found how little the application of time-honored money savers, like outsourcing and cutting jobs, transferred to hand building yachts and superyachts of up to 40 meters in Plymouth, on England’s south coast.

So rather than streamlining Princess Yachts International, Sheriff took a different tack. Go upmarket. Innovate. Improve design. In just a few years he’s expanded staff by about 1,000, or almost 50%. Some new looks, such as the R35, come from Italy’s storied house of Pininfarina, the hand behind scores of Ferraris, Alfa Romeos and Lancias. Beneath that design, the yacht also features a stability mechanism first developed for British efforts to capture the America’s Cup sailing jug.

Graphic: The Hidden Costs of Owning a Superyacht

The timing of the turnaround couldn’t be better. The current economic climate, with a growing class of super-rich, has been good for the yacht trade, and Princess, which earned almost £30 million ($36 million) on revenue of some £340 million in 2018, has been among the lucky beneficiaries. Its books are filled through the year and well into 2020, with more than £700 million in commissions. To match record boat sales, record-high employment of 3,200 makes Princess one of the U.K.’s largest specialist manufacturers, overtaking Aston Martin.

Princess was sinking financially as recently as 2015, with a £19 million loss. L Capital 2 FCPR—a private investment fund underwritten by LVMH, the owner of luxury brands like Louis Vuitton and Dom Perignon—had acquired the company 11 years ago from its founder, David King.

The new owners, along with the family investment house of billionaire Chairman Bernard Arnault, brought fiscal muscle and a necessary modicum of patience to the task of righting the respected builder of sturdy, but slightly dull, luxury craft. A £100 million, five-year turnaround plan started in 2016 and coincided broadly with the announcement of a partnership between LMVH and Catterton, the wealthy Greenwich, Connecticut-based private equity firm, an association known as L Catterton. It controls the yacht maker today. Sheriff joined not long after the deal was done.

“When I got here I thought, ‘We’ve got an amazing facility with people with 50 years of experience working in it. We make everything ourselves. We’re vertically integrated to a ridiculous extent,’” he says in an interview. “And then I looked around and realized, ‘Well there’s nobody else within 200 miles who can make this stuff anyway.’” So with outsourcing off the table, hand-craftsmanship became a marketing line. “Our brand is no longer ‘Princess.’ It’s ‘Princess, crafted in Plymouth,’” he says.

Some 75% or more of each Princess yacht is made on site—all the way down to wire harnesses and fuel tanks. “We really do have little old ladies and little old men and young men and young women making everything,” Sheriff says. “The customers come and they see not just a boat being assembled with purchased parts, but they see sheets of wood coming in and being transformed into this beautiful furniture.”

Sheriff, a 56-year-old with American and Italian roots, grew up in New England but has lived much of his adult life in England. He started at Chrysler before moving to Fiat, then jumped to a top role at McLaren in 2003. He is credited with the successful launch of the F1 constructor’s first 21st century road car, the MP4-12C, and its £1.3 million P1 petrol-electric hypercar. But he clashed with then-company chairman, Ron Dennis, as, it is fair to say, did many others whose path crossed that of the successful race team owner.

Sheriff’s ties to the automobile industry remain strong. He sits on the board at three promising new-tech automotive ventures: Rivian, a Michigan-based startup that plans to build electric pickup trucks and SUVs; Rimac, a dynamic and highly regarded Croatian outfit whose advanced electric vehicle technology and engineering nous have already attracted significant investment from Porsche and other heavyweights; and Pininfarina. Reinvigorated with the backing of new owner India’s Mahindra and Mahindra, it is building a 1,900-horsepower, all-electric, all-wheel-drive hypercar: the $2.1 million Pininfarina Battista.

“It’s our nautical equivalent of a supercar,” Sheriff says of the swoopy, 10.89-meter V8-powered yacht, which looks like a large-but-sleek racing boat, with a swishy cabin that will travel at a brisk 50 knots (58 miles per hour) until the fuel runs out.

One strategy Princess took from the car industry is “platform sharing,” the idea that the parts hidden from view—the undercarriage and mechanical systems, for example—can be shared across a variety of models, while the exterior surfaces change, reducing cost and complexity. “You’ll see a hull which has the same hull molding but a completely different concept for the boat above.” Sheriff says. “So what sits above the deck is differently laid out, with different shapes. What sits below deck is identical.” That means tweaks to exterior design and treatments create the appearances of new yachts, when in fact they are born from the same mold.

The overall approach has captivated the industry press, said David Robinson, a longtime U.K. yachting business journalist. “This company has been totally rebuilt using investment as a catalyst to boost product development, upgrade manufacturing facilities, increase its marketing and enhance its international distribution network,” he says. “The outcome of these efforts shows through.”

The big one: Just like supercars, improved technology means pretty much anyone can skipper a yacht.

“If you know how to drive a Fiesta, you can drive a McLaren,” he says. “Boats are the same. They’ve become a lot less intimidating ... You want it to stay where it is? You just hit a button. It locks into the GPS—no matter what the current is, it stays where it is.”

The other trend is a push for solitude.

“People buy them because they love spending time in a quiet place with their family, away from everything else, where the kids can’t run off.” he says. “They’re in tune with this conception of how you want to spend holiday time if you have money: Rather than private jets and stuff, you go out on a boat and spend high-quality time.”

To contact the author of this story: Jamie Kitman in New York at

To contact the editor responsible for this story: Timothy Coulter "Tim" at tcoulter@bloomberg.net, Lisa Fleisher