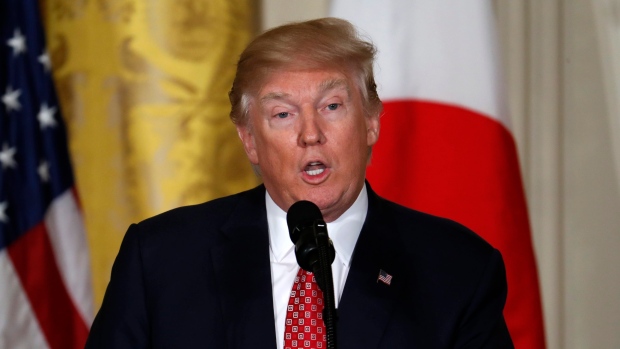 As U.S. President Donald Trump wraps up his third week in office, his proposed policies continue to be scrutinized. From his executive order to review Dodd-Frank, to proposed border taxes, and promised corporate tax cuts, a number of CEOs have weighed in.

“We haven’t seen any evidence of an increase in business as a result [of Trump’s potential immigration policies]. It’s early days. I will say that [U2 singer] Bono, a famous musician, said at a concert once, that what the world needs now is more Canada… We still have a weak Canadian dollar. And I think that bodes well for tourism to Canada, and of course, WestJet hopes to participate in the updraft that comes from more tourists wanting to come and visit our country.”

“We’re following the [U.S.] position on immigration and labour. We’ll be following the view on tax reform in the U.S. and new spending. I cannot envisage a North America that doesn’t have a trade agreement. I’m certainly a believer that economics ties us together, trade ties us together, and it needs to be fair for all parties. I’m sort of on the optimistic end that NAFTA – or a form of NAFTA – is going to remain in place.”

“I think [a possible border tax] is a real red herring. When I look at it, I think why would they approve the [Keystone XL] pipeline and tie in the biggest oil reserves on the planet for security of supply reasons? It makes no sense to me that there would be a big border tax.”

“What I see is a lot of uncertainty – and a lot of frustration [about the order to review Dodd-Frank]. There’s a lot of change taking place. Change for the better is not a bad thing. But it should be done in a very thought-through way. I think we should take a step back, look at Dodd-Frank – what are the good parts of it, what are the bad parts of it? You definitely don’t want to get back into a situation where 2008 becomes very, very close to us again. So I think we need to learn the lessons. Maybe with Dodd-Frank they went a bit too far.”

“The travel ban really runs counter to our culture at Akamai. Diversity and inclusion are very important to us. It makes it hard – or impossible – for some of our employees to travel, causing a lot of concern for our employee base and also our customers.”

"[Trump] has injected some unusual uncertainty into the business. But I often say to clients, many of whom as Canadians are not very keen on Mr. Trump as President of the United States, is that he may not be good for the world but he may be very good for the stock market and your portfolio. He is a very strongly pro-business president, he has a very pro-business cabinet."

"I think if you just look at the history of [Trump] doing business, he does have an appreciation for Canada. [U.S. Secretary of State] Rex Tillerson is someone who knows Canada very well. So I think from the Canadian standpoint — it's really looking at yes, Canada is going to be a friend to [Trump], but on what topics? … So we definitely have to continue the right level of communication."

"Dodd-Frank wasn't going to be a big negative [for Manulife]. To the degree that it helps out the banks in the United States and that it is good for the economy, it will be a positive for us in the macro-economic sense. But it doesn't have any direct impact on us. The more important thing is that the underlying U.S. economy is doing well. If there is less regulation and some more positive things in terms of economic growth, the U.S. will be doing really, really well. And that's good for us."

"We're actually very well-positioned from a tax perspective. I think we're in very good shape because we're very local to the U.S. The products we sell in the U.S. are supported and done in the U.S. So we aren't importing and exporting a lot of things. We like the idea of less regulation. That definitely helps us deliver these products were are really looking to launch to customers with less barriers to getting them to market."

“I think the border tax is a big, big deal. Hopefully cooler heads will prevail. The tax story has to get straightened. [The U.S. government] thinks it works. But it only works as an island. The retaliatory taxes and tariffs that other nations would put on would make this a pretty ugly scenario. I hope [Monday] is just a good meeting, and I hope [Trudeau and Trump] can get off on the right foot and set some good, positive relationships going forward. I think the reality is the Canadian government has actually done a  good job in reaching out to the U.S. government –  stressing the importance of the trade relationship, stressing the importance of the unique relationship we have.”