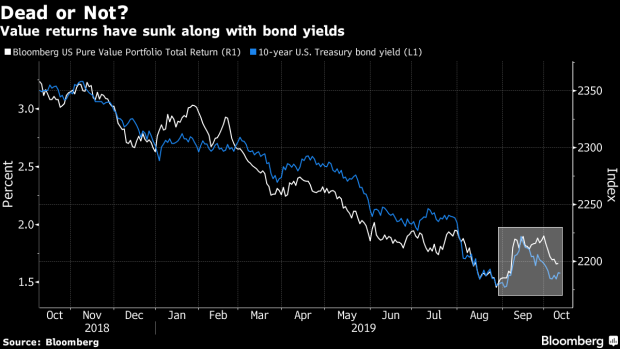 (Bloomberg) -- On a cool October evening in the City of London, a small army of investment professionals has gathered for a reckoning. They’ve come to hear Inigo Fraser Jenkins, one of the quant industry’s most colorful commentators, opine on the fate of value investing. After years of miserable performance and fleeing cash, it should be a gloomy topic -- but Fraser Jenkins is in a playful mood.

“Where equities are quite fully valued, credit is pretty expensive, sovereign bonds are expensive, private equity is really, really expensive, maybe the only cheap thing I can go buy is value,” Sanford C. Bernstein’s head of quantitative strategy tells his audience. “With the enormous caveat that it’s very important that I have absolutely no clients at all.”

The crowd bursts into laughter. They are well used to gallows humor when it comes to value. The investing style that seeks to buy securities which are undervalued by some fundamental measure has been lagging just about every other strategy for a decade now.

More than a decade, in fact. An investor who went long cheap shares and short expensive ones has lost 37% since 2007, according to Research Affiliates. The California-based firm, which helped pioneer a mash-up of active and passive investing known as smart-beta, sees huge upside when value mean reverts. GMO LLC, the famous value-investing money manager founded by Jeremy Grantham, made a similar argument in a quarterly letter to clients.

The debate over the investing style is suddenly red hot thanks to September’s market turmoil, during which a pure value factor posted its best week in 10 years. It resumed its underpeformance versus more growth-oriented assets soon after, but the brief revival was enough to catch the investing world’s attention.

“It’s incredible the number of phone calls I got from people over the course of last month, saying: Is this it? Is this the beginning of the value rally that we’ve been waiting for for years and years?” Fraser Jenkins says. “I find it very hard to agree with that sentiment.”

Fraser Jenkins believes value lives on, but it needs higher inflation and a new definition that takes into account intangible assets. At current levels it might be a good opportunity for asset owners that have “a truly long horizon,” but the problem is few actually do, he says.

A hundred or so people have come to hear him speak at an event hosted by the London Quant Group, which organizes freewheeling evening seminars to talk all things systematic investment. The drink supply is bottomless and the canapes are plentiful. Unfortunately where value is concerned, the patience of clients is neither.

Ben Inker can tell you all about that. The head of asset allocation at GMO tackled the issue head on in his letter this month, comparing the current situation to the “unimaginably bad” era endured by value in the 1990s.

“While the magnitude of our underperformance has been 20% to 25% less than it was last time around, its duration has been particularly painful,” Inker wrote. “This period has lasted over 10 years instead of the five years of the late 1990s. Unsurprisingly, our clients are once again finding their patience wearing thin.”

Yet according to the industry veteran, that’s precisely why there has rarely been a better opportunity. Assuming value reverts to its long-term average, GMO’s seven-year forecast is for both their multi-asset portfolio and global equity portfolio to significantly outperform benchmarks.

“Today is not 2000, and today’s opportunities are not quite the same as the ones we had at our disposal 20 years ago,” Inker wrote. “But in our estimation, they are similarly extraordinary and far better than anything we had seen before that event or have seen since.”

In the same week as the London Quant Group gathering, Research Affiliates was hosting an altogether more formal London event that devoted a session to value investing. The firm estimates that a mean reversion of valuations today could see value outperform growth by about 35%. The problem is timing.

“The simple fact is no one knows when the turn will be,” founder Rob Arnott said in a video address to the group of asset-management professionals assembled in Holborn. “And if you buy what’s newly inexpensive, you may have a little while to wait until markets turn and during that period of time you will look and feel like an idiot.”

With bond yields tumbling this year and tech stocks re-asserting their leadership, value looks doomed for bed rest, if not death. Among six major factors, it is the worst performer both year-to-date and in the past month, according to Citigroup Inc. indexes.

All of which has made being a value fund manager these days like going down to “lonesome town,” Fraser Jenkins wrote in a note on the day of his talk. He was citing a 1958 Ricky Nelson track, filled with lyrics about regret and learning to forget.

Standing in front of a crowd of his peers, most of them drink-in-hand, leading a debate that’s spreading through the investment world, at least he knows he’s not alone when talking about it.

To contact the editors responsible for this story: Samuel Potter at spotter33@bloomberg.net, Cecile Gutscher