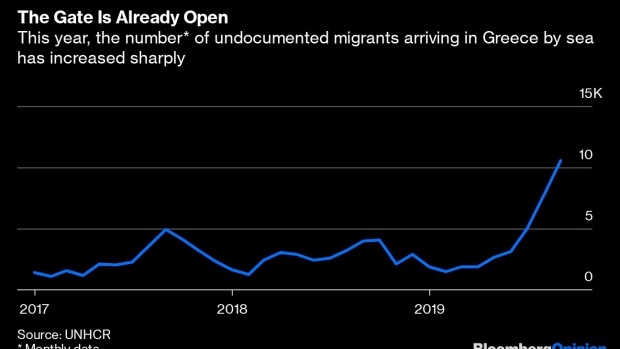 (Bloomberg Opinion) -- On Thursday, Turkish President Recep Tayyip Erdogan threatened to “open the gates” to Europe for Syrian refugees temporarily housed in Turkey unless the European Union stops its harsh criticism of his military operation against the Kurds of northern Syria. The threat is not new, though, and Erdogan is no more likely than before to make good on it. Instead, he’ll likely push the refugees in the opposite direction.

In March 2016, Turkey signed a readmission agreement with the EU allowing the Europeans to send any undocumented immigrants arriving from Turkey back to that country. In return, the EU offered 3 billion euros ($3.3 billion) in aid immediately, and another 3 billion euros by the end of 2018. The deal was a key element in the chaotic but ultimately effective European effort to reduce the influx of asylum seekers from war-torn Syria and other Middle Eastern and African countries.

In the years since the deal was signed, the EU only returned some 2% of asylum seekers arriving on the Greek islands from Turkey. To avoid being sent back, the refugees began applying for asylum on the islands without waiting to reach their intended destinations such as Germany. Greece has been chronically unable to handle the application backlog, and the islands are now home to miserable, overflowing refugee camps holding more than 30,000 people.

The deal’s value, however, wasn’t so much in the actual readmissions but in Turkey’s willingness to house an enormous number of refugees, providing them with decent enough conditions that they don’t set sail for Greece. There are almost 3.7 million Syrian refugees in Turkey now. Erdogan claims Turkey has spent $40 billion to support them, far more than the $7 billion in aid he reckons the country has received from the rest of the world.

Erdogan started threatening to open the gates for the refugees months after the readmission deal was signed. Even in 2016, he felt the EU aid, used for things such as refugee children’s schooling, wasn’t coming fast enough. More recently, the threats have become more frequent as the Syrians – provided only temporary protection rather than a full refugee status – have grown increasingly unpopular in economically pressed Turkey. In July, Turkey even announced a suspension of the readmission deal in response to (rather weak) EU sanctions for Turkey’s gas drilling in disputed waters near Cyprus. It doesn’t really matter what the current pretext for opening the gates is; Erdogan must get rid of at least some Syrians.

Erdogan’s most recent plan is to move up to 2 million of the refugees to a specially created “safe zone” along the Turkish border in Syria. That requires pushing the Kurds of the Syrian Democratic Forces 30 kilometers (18 miles) away from the border. The two goals of the current Turkish military push, condemned by European Commission President Jean-Claude Juncker and by European governments, are to increase border security by pushing back the hostile Kurds and to get the Syrians off Turkish land.

The plan, of course, is unpopular with human rights defenders and with European governments: One doesn’t resolve one humanitarian disaster by creating another. But harsh action against a North Atlantic Treaty Organization ally is tough, and at this point, European condemnation doesn’t amount to more than noise.

So, probably, do Erdogan’s threats, though. He can bus refugees to the Syrian border, as he’s already done with those who failed to register with the government, and he can stick them in areas captured by Turkish troops in Syria. But he cannot put them on ships and send them to Greece. Such open action on the part of his government would likely put an end, at least temporarily, to Turkey’s customs union with the EU, exacerbating its economic problems – and Europe likely would push back the ships, anyway.

“Opening the gates” mainly means not preventing refugees from leaving for Europe voluntarily or human traffickers from setting up shop on Turkey’s Mediterranean coast. However, Turkey hasn’t been doing much to stop migrant crossings lately: More monthly arrivals have been registered on the Aegean Sea islands since summer than at any time in the last two years.

It’s unlikely that many more people want to embark on the journey. By now, the conditions in the camps on the Aegean islands are well known to the Syrians living in Turkey. Given the snail’s pace at which Greece processes applications, the future is bleak for those who cross the sea. And Europe can live with the current increase in arrivals even if that means relieving Greece’s burden by resettling a few thousand more people.

Erdogan isn’t really an effective gatekeeper when it comes to Europe’s refugee influx. In fact, his military operation in Syria may send a flood of Kurdish asylum seekers to Europe by other routes. The readmission agreement has served its purpose, and the EU shouldn’t cling to it. Perhaps giving it up would give Erdogan pause: He’d be forced to pivot from trying to blackmail Europe to thinking about how to salvage his country’s most important economic relationship.