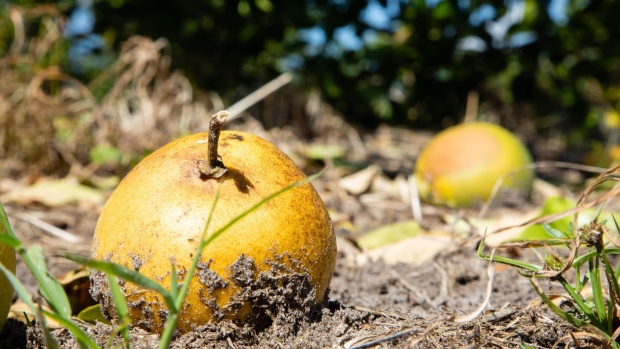 (Bloomberg) -- The waters have receded, but the stink lingers. As Emma Reynolds Ezell surveys the damage that a night of 100 mile-per-hour winds wrought on her orange groves, she just can’t get over the stench. It’s nothing like the usual sweet citrus scent that drifts on the breeze. Instead, it’s “swampy:” The putrid odor of oozing mud that’s filled the local ditches after the waters of nearby Lake Placid overflowed in the torrential rains.

It’s been about a week since Ian struck. One of the worst hurricanes to ever hit the US, the storm left millions of Florida homes without power, sparked a devastating storm surge and left dozens dead. And only now are farmers finally able to make some of their first assessments of what the destruction will mean for the state’s iconic $6.7 billion citrus industry.

The early estimates are bad.

Growers like Ezell predict they’ve lost at least half their crop to wind damage. In some of the harder hit areas, it could be even worse, with reports of as much as 80% of fruit getting blown off trees on some farms. That’s devastating to an industry that’s already been dealing with a crippling crop disease. And it’s bad news for a world in the grips of shocking food inflation. Orange juice futures traded in New York jumped to a six-year high this week amid the supply concerns, before giving back some of those gains.

Across Florida’s Hardee and Highlands counties, in the heart of the citrus belt, the signs of disaster are everywhere. Tree limbs, powerful enough to support the weight of the full-grown fruits that hang from their branches, have snapped right off and lay scattered on the ground. In some places, the wind was so strong that the trees themselves were pulled right out of the earth, exposing their bare roots. Ditches are overflowing with water, and in nearby DeSoto County, some areas are still so flooded or mud-ravaged that the roads are impassable.

But what’s more striking than all that is the tens of thousands of pieces of dead fruit that litter the ground. On Ezell’s farm, it looks as if an 18-wheeler truck spilled its cargo to blanket her groves with bright yellow and green softballs. The growing season was still underway, which means much of the fruit hadn’t yet fully matured and achieved its full signature orange color.

On the night Ian arrived, Ezell hunkered down in her home. She and her husband, along with their two children, Eli and Eloise, huddled together in one room. A Florida native and a fourth-generation farmer, Ezell is no stranger to hurricanes. But this one was different. As the winds howled and speeds picked up to 100-miles-per hour, she began to pray. By 6 am the next morning, after only a couple of hours sleep, she was already in her groves, tallying the damage.

Florida is a key source of vegetables, livestock, dairy and fruit — most notably the oranges it’s famous for. The state grows 500,000 acres of fresh produce a year, generating about $20 billion in total sales. There are more than 6,400 fruit and vegetable farms with a total of 139,000 workers. It also represents $516 million in fresh produce and tree nut exports.

Ian ripped through four of Florida’s five biggest citrus-producing counties: DeSoto, Highlands, Hardee and Polk. The industry is one of the main economic drivers in the region and supports almost 33,000 full- and part-time jobs in the state, including on farms and in packing and processing plants.

Even before the storm, Florida’s growers were facing one of the smallest crops on record, partly because of a decades-long battle with a devastating disease called citrus greening that damages fruit and eventually kills trees. Drought in Brazil, the world’s top orange grower, has stifled production there. And farms in California have also suffered from dry weather. The global challenges helped to send orange juice futures up almost 50% over the past 12 months.

For Florida, the output hurdles have been so acute that there’s a question of whether California will overtake the Sunshine State as the nation’s top citrus grower.

Ian was “certainly not a death sentence to the industry,” said Ray Royce, executive director of the Highlands’ growers group. But, he says: “It’s another setback, and I am not trying to sugarcoat it.”

At Mixon Fruit Farms, a coastal citrus producer based just south of Tampa, it will likely take weeks to tabulate the damage.

“The oranges are now laying under the tree,” said Janet Mixon, referring to her groves located in Manatee County. “The fruit wasn't ready for picking yet, but the wind took 'em right off.”

Ned Hancock, a fifth-generation farmer who has about 900 acres of citrus groves across Highlands and Hardee counties, said he’s going to do whatever he can to avoid having to lay off any of his full-time employees.

That will be a tall order after more than 50% of the fruit was blown off his trees in Highlands County and losses of about 75% in Hardee. Hancock said Ian dumped about 15 inches of rain on his land and left temporary rivers between rows of trees. The standing water will mean that the damage is more than just what can be seen, with the underground tree roots also suffering. Some of his farming infrastructure was also destroyed and will be very expensive to fix, he said.

Crop insurance can cover part of the losses, but Hancock, along with many of the region’s farmers, expect a year of no profitability. Margins have already been squeezed for years by rising costs, compounded by the recent run in the fertilizer market.

“It was a major blow, and the first thing you worry about is people, the family, employees — but you can’t help thinking, ‘What’s it going to be like to rebuild from a grove standpoint?’” Hancock said. “It’s not going to be pleasant or easy.”